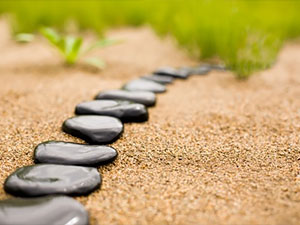 An Introduction to Feng Shui

Feng Shui is one of the eight limbs of Chinese medicine. How can we heal when we are in a chaotic or messy environment? A calm, peaceful environment helps us to rest, relax, and restore our vital energies. All eight limbs of Chinese medicine work together to create good health: feng shui, astrology, herbology, exercise (tai chi, chi kung), meditation, diet, massage, and acupuncture. We can create a balanced home, landscape, and workplace by applying feng shui principles of balance and harmony.

Everywhere on our planet - from the pyramids in Egypt, to the monoliths of Stonehenge in England, to the Ming tombs in China - ancient people honored sacred places. Mountains, rivers, hills, and groves, or places where natural phenomenon occurred, indicated a sacred place.

Feng shui (pronounced "fung shway") is an ancient Chinese art and science of locating a sacred place on earth. The literal translation of feng shui is "wind" and "water", two elements of nature. The ancient Chinese people developed feng shui based on their unique spiritual view of the world. They studied nature to make sense of the universe. In nature they sensed "chi"energy, the breath of life in all things. They understood the harmony of life by observing nature and being expert intuitives. The ancient ones recognized chi in a landscape to determine which locations would be safe from danger, provide lush vegetation, and align harmoniously with the geomagnetism of the earth.

The philosophy of the balance of nature became the spiritual philosophy of Taoism (pronounced "Dowism"). Priests of Taoism, who were both female and male, discovered and developed feng shui geomancy through observation of land forms, river flows, movement of planets, behavior of animals, and changing weather conditions. Feng shui concerns of the early Taoists were when to cultivate crops, how to irrigate with the flooding rivers, and where to construct villages, buildings, and tombs.

The ancient Taoists observed that humans live where earth meets heaven, in the middle of these two great forces, in the "Middle Kingdom." The ancient Chinese invented the magnetic compass and correlated the following mythological animals to each of the four directions:

A way to create order out of chaos is the divide the cosmos into elements.

The ancient Taoists understood the unity of all things as created from the five Taoist elements of fire, earth, metal, water, and wood. These five elements are used in feng shui to balance and create harmony.

An interpretation of yin and yang in a landscape is that mountains are yang and valleys are yin. An interpretation of yin and yang in architecture is that yin buildings house the dead and yang buildings house the living. Yin and yang balance applies to interior spaces. An excessively yin room is dark, damp, and poorly lit. Such an environment can evoke feelings of sadness. An excessively yang room is too bright or over lit. It can evoke feelings of anxiety. When balanced, yin and yang are appropriately applied to interior spaces. For example, a bedroom is a quiet yin room for sleep, yet a living room is a yang room for lively conversation and activity, for "living."

The eight trigrams in Chinese are ba-gua, pronounced "bah gwah." Ba means eight and gua means trigram. A trigram is a symbol made of three lines stacked on top of each other. A solid line represents yang chi. A broken line represents yin chi. The ba-gua can be applied as a feng shui template over a room, building, site, or landscape. Trigrams represent elements of nature: fire, earth, lake, heaven, water, mountain, thunder, and wind.

According to the ancient Taoists, all energy is interconnected. This connection, the Tao, is symbolized by the interwoven circle of Yin and Yang.

Traditionally, yin is the dark, feminine, and receptive principle. Yang is the light, masculine, and active principle. Together, yin and yang flow endlessly into each other. Each creates and defines the other's opposite.

Yin and yang are relative to each other and are in a constant state of flux.

For example, because of the existence of dark, the concept of light has meaning. Similarly, high is defined by low, and sweet is defined by sour. In Western thought, the balance of yin and yang could be interpreted as conflicting opposites. Yet in Taoist thought there is not duality but unity.

The interplay of yin and yang are described in the verses by the Taoist philosopher Lao-Tzu, born in 604 B.C. Lao-tzu distilled Taoist wisdom into eighty-one short chapters of verse in his classic book the Tao Te Ching. He explains the harmonious yet dualistic principles of the Tao:

Thirty spokes join together in a single wheel, but it is the center hole that makes the wagon move.