Learn more about your zodiac sign to shed light on your personality, love life, career, and more. Insight into your strengths, weaknesses, and life path are all accessible once you unpack your zodiac sign’s lessons during this life.

What is the Zodiac?

The zodiac wheel encompasses 12 signs—beginning with Aries and ending in Pisces. This modality is presented via a sphere (or “zodiac wheel”) that is divided into twelve separate sections in the sky. Each section correlates with a zodiac sign—through which the sun, moon, and planets pass during the year. The zodiacal belt is a heavenly body that extends to 8 degrees north or south of the ecliptic.

Keep in mind that this is merely a broad explanation. The zodiacal presentation can greatly differ depending on which type of astrology used (tropical or sidereal), as well as which House system is implemented. Overall, the zodiacal sphere is used to gauge daily transits and will also dictate birth chart placements.

What are the Elements?

The zodiac is divided into four elements: fire, air, water, and earth. Each element is home to three signs and is paired with a complimentary element. Fire is complementary to air, as water is to earth. The signs within each element all share universal characteristics. Fire signs (Aries, Leo, Sagittarius) are exuberant and passionate, literally blazing with heated personalities.

On the other hand, the air signs (Libra, Aquarius, Gemini) are logical and detached, able to view their surroundings with social intelligence.

The Earth signs (Capricorn, Taurus, Virgo) are grounded and stable, rooted in structure. So, the Water signs (Cancer, Scorpio, Pisces) are typically emotionally motivated and compassionate, gifted with an innate empathic understanding. Together, each element offers unique traits, but the signs within them differ in expression. It can explain why some signs have similar attributes, but no one sign is the same.

Each modality is associated with four zodiac signs. The cardinal signs are Aries, Libra, Capricorn, and Cancer. The fixed signs are Taurus, Scorpio, Leo, and Aquarius. Lastly, the mutable signs are Gemini, Sagittarius, Virgo, and Pisces. The zodiac is split neatly down the middle by duality. There are six feminine signs and six masculine signs. The feminine signs are the earth and water signs, usually known for a more passive approach, deep intuition, and introverted energy. The masculine signs are the air and fire signs, typically known for an active approach, gut instinct, and extroverted energy.

Aries is a cardinal, masculine fire sign. It's ruled by Mars and is associated with the First House of “the self.” As a cardinal sign, Aries begins the zodiacal modality and astrological year. It's the original leader!

Aries's masculine nature is forthright with vigor, a trait further amplified by its planetary ruler, Mars. Aries is known to be vivacious, enthusiastic, childish, and a bit selfish. Although this sign is impulsive and hotheaded, nobody can deny the quick-thinking and intense call-to-action innate in any Aries. Expressed as the Ram, Aries can be counted on to headbutt its way through anything!

Taurus is a fixed, feminine earth sign ruled by Venus and associated with the Second House of money and value. As a fixed sign, Taurus is a natural stabilizer, graced with an earthy presence and stamina.

The subdued, yet elegantly feminine, nature of Taurus is sensualized by its planetary ruler, Venus. Taurus is always counted on for great taste and pleasurable pastimes. But the phrase, “stubborn as a bull,” fits this zodiac sign beautifully, as it is represented by the Bull. However, nobody can deny Taurus' ability to weather any storm through thick and thin.

Gemini is a mutable, masculine air sign, ruled by Mercury and associated with the Third House of local community, short-distance travel, siblings, and communication.

Fickle and flighty, Gemini's mutable nature is restless. Gemini's mutability is directly expressed thanks to its masculine nature. It often comes out as a witty remark, a flippant hand gesture, and an overbooked schedule. As it is ruled by Mercury, Gemini is typically concerned with learning as much as possible from its peers. Gemini's intelligent duality is expressed as the Twins, implying that Gemini's mercurial mind considers all perspectives.

Cancer is a cardinal, feminine water sign ruled by the moon and associated with the Fourth House of Home and Family in all generational forms.

Driven by gut-wrenching intuition, Cancer's cardinal capabilities come from its feminine energy. Cancer is the leader who can intuitively act and decide but will also dip and dodge responsibilities as well. Cancer's watery nature is often all in or all out. Ruled by the moon, Cancer's psychic receptivity is incredible. It is motherly, nurturing, and compassionate. It's also usually wrapped up in a moody presence. After all, Cancer isn't known as the Crab for nothing!

Leo is a fixed, masculine fire sign, ruled by the sun and associated with the Fifth House of joy, pleasure, sex, children, and dating. As bright as the sun itself, Leo loves to shine!

Leo's natural habitat is the center stage for attention. Bold and audacious, Leo's warmth remains unmoving—thanks to its fixed nature. While stubborn at times, Leo tends to remain enthusiastically engaged. Whether it's Leo's immense joy or dramatic flair, no other sign can match the King or Queen of zodiac. This Lion will always have the loudest roar!

Virgo is a mutable, feminine earth sign, ruled by Mercury and associated with the Sixth House of work, health, and daily routines.

Much like clay, the earthy mutability of Virgo is consistently adaptable. Virgo is known to be dependable—thanks to Virgo's attention to detail and perfectionist mindset. Although somewhat nervous, thanks to the restless Mercurial influence, Virgo tends to strive for the best outcome at all times. So, Virgo's critical nature is ideal for catching—then perfecting—every flaw. After all, nothing gets by the Virgin. And when lightning strikes, the volcanic nature of Virgo becomes electric!

Libra is a cardinal, masculine air sign ruled by Venus and associated with the Seventh House of commitment, partnerships, and marriage.

Represented as the Scales, Libra's cardinal nature comes from its ability to weigh all pros and cons. Although expressed with masculine drive, Libra's air qualities tend to take over. Libra values partnerships above all else, so its leadership capabilities heavily depend on social relations. At times, Libra may come across as codependent or indecisive. If anything, Libra wants to ensure that every decision is reciprocal! Libra is all about keeping it 50/50, in true Scales fashion.

Scorpio is a fixed, feminine water sign that is co-ruled by both Mars and Pluto. It's associated with the Eighth House of joint resources, intimacy, and transformation.

Ruled by Mars and Pluto, Scorpio is an intense sign. Its fixed water persona implies a profound, unmoving emotional depth. No other sign can fearlessly explore the underworld like Scorpio. Scorpio's extraordinary fierceness is undeniable. Because of its intensity, Scorpio tends to go through multiple phases of transformation, beginning with the Scorpio and ending with the Phoenix. Look no further for redirection, as Scorpio can be the spark for cabalistic transformation!

Sagittarius is a mutable, masculine fire sign, ruled by Jupiter and associated with the Ninth House of exploration, long-distance travel, philosophy, law, and spirituality.

The wildfire nature of Sagittarius is thanks to its mutable fieriness. Sagittarius tends to be an expressive, jolly sign with a booming presence. Larger than life, Sagittarius's planetary ruler, Jupiter, often gifts this sign with excessive tendencies and an abundance of luck. Much like the Centaur, Sagittarius brazenly explores unknown territory. At times, this sign can be a tad much, from opinions on politics to exorbitant vices. But Sagittarius tends to shine as the perfect travel buddy, debate partner, and mischief-maker!

Capricorn is a cardinal, feminine earth sign, ruled by Saturn and associated with the Tenth House of career, reputation, and goals. Capricorn focuses on building an empire, with its feminine cardinal abilities facilitated through earthy stoicism. Capricorn plays the long game to ensure incredible success.

Ruled by Saturn, Capricorn is tasked with the karmic duties of time, lessons, and authority. No other sign can shoulder the weight of the world as Capricorn can. So, it's no surprise that Capricorn is expressed as the Sea-Goat or Goat. Much like a goat clinging to the mountainside, Capricorn will tenaciously persevere.

Aquarius is a fixed, masculine air sign—ruled by Saturn and Uranus. It's associated with the Eleventh House of greater communities, friendships, and dreams. Aquarius is a paradox. Its fixed nature is unmoving, yet its air qualities prefer innovation.

Aquarius is a technological sign, preferring both the structure of Saturn and the unconventionality of rebellious Uranus. To amplify Aquarius' quirkiness, it's represented as the Water-Bearer. Surprisingly, Aquarius is highly empathetic, but shielded by a cold front. Aquarius wants to better the collective but is also highly selective with personal relationships. No matter what, Aquarius tends to shine in its individualism.

Pisces is a mutable, feminine water sign, co-ruled by Jupiter and Neptune. It's associated with the Twelfth House of the subconscious, hidden talents/weaknesses, and self-undoing. Pisces weaves in and out of conscious reality thanks to its mystical mutability.

Graced with water attributes, Pisces has this eclectic magic, gifted with psychic receptivity and scarily accurate intuition. Jupiter tends to magnify these qualities, but Neptune also tends to delude them with a dreamy confusion. Represented by two Fish swimming in synchronicity, Pisces is the reminder to consider the known and unknown. 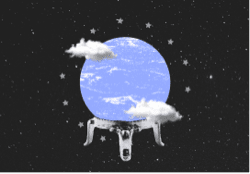 Your astrological overview guides you on what to look out for and how to act in tune with the stars and planets each day.