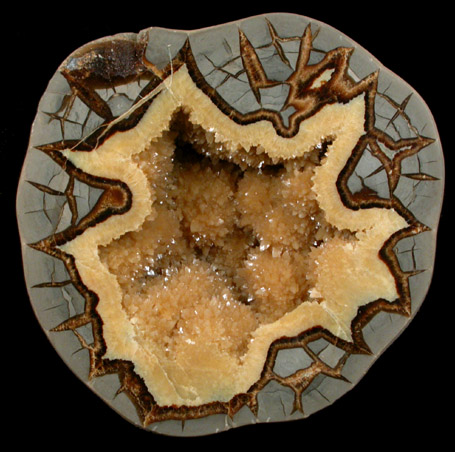 Many millions of years ago, when the ocean still stretched all the way across the state of Utah, things were happening. Volcanic eruptions rocked everything, and death swept through the seas. When the waters receded, sediment and dead sea life, bound by chemical attraction, formed balls of clay. The clay shrank as the sun warmed and dried them, and the balls cracked and split. As decomposed shells filtered down into the cracks, yellow calcite crystals began to form. The thin outer walls of these concretions then transformed into aragonite.

These stones are called septarian nodules, from the Latin “septum,” meaning seven, because the mud balls exhibit a tendency to crack in seven points in every direction.

Dig deeper into the meaning of these numbers with your 2018 Numerology Forecast!

The sun and Venus and Pluto are aligned in Capricorn today, bringing down some tough love and reevaluation from the cosmos’ father figure. Mercury will be joining them in Capricorn tomorrow. And with Saturn at home there too, it feels heavy, a little scary. There’s a sense of solemnity, depression and dread that can come from all this Saturnian energy, especially once Mercury joins the party.

But here’s where septarian nodules come in. The clay represents mutability. The yellow calcite is for joy and wonder. Aragonite is a stone of truth and determination. And limestone, which covers them after all their millennia of resilience, is for being humble and flexible in the face of forces larger than yourself. There has been so much life and death before ours. There will be so much that comes after. We are small, but we are mighty. We are resilient. We break boundaries and we can withstand immense pressure, as long as we can also transform.

Septarian nodules are wonderful allies in pondering your own transformations and transmutations. Keep one on an altar or carry a small one in your pocket to study their visual reminder of humble power.

Grounding Elements Pro Tip: Keep one of these septarian nodules in your pocket and give the other to a friend.