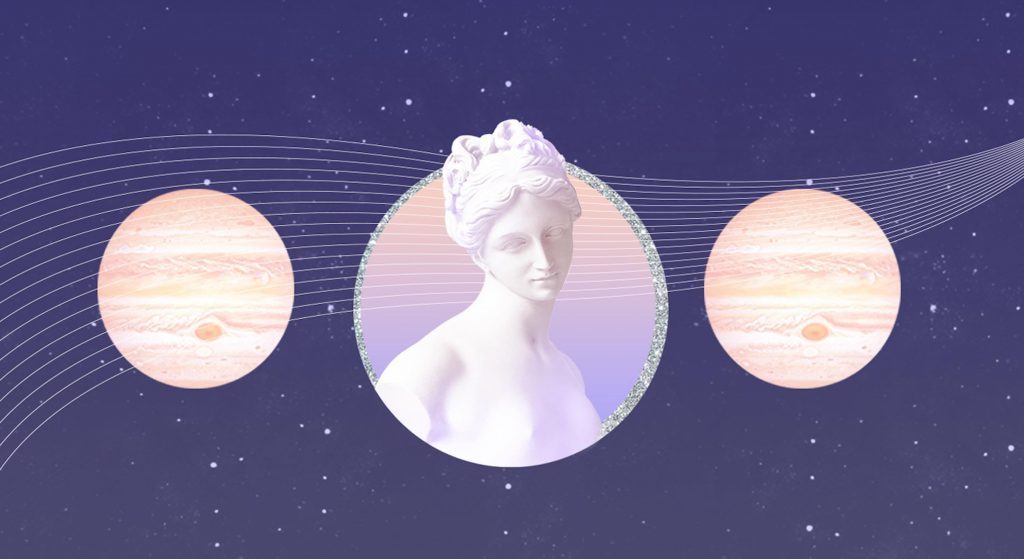 January presented us with a difficult task: the retrograde of two natal planets, Venus and Mercury. The call to go within was loud and clear, and the learnings, while challenging, were crucial preparation for the rest of 2022. The astrology of February comes with a completely different energy, as the planets will be harmonizing instead of clashing and moving backward in the sky.

As we enter February, Venus is now direct, and soon after, Mercury will follow on February 3. From February 4 to April 29, there will be no retrograde planets in the sky! This is rare and, luckily, coincides with the time Jupiter is very strongly placed in its sign of traditional rulership, Pisces. Another win of the astrology of February is brought by Mars, as the planet recently entered Capricorn, its sign of exaltation, on January 24. Mars will also be traveling very close to Venus from February until the end of March. All this combined makes up for an amazing month, bringing all kinds of opportunities for manifestation. Whether you want to focus on career, love, creativity, or attracting more abundance, February has it all for you!

A New Moon in Aquarius:

While this month’s new moon technically occurs on Monday, January 31, at 9:46 p.m. Pacific Time, as we enter February, we are still under the beams of this lunation. Happening in Aquarius, this new moon brings a double dose of rational energy that can be used to integrate all the learnings from Venus and Mercury retrograde. Under this lunation, we can detach from all the emotion and really see why the universe required all this deep introspection from us. This new moon also activates the ongoing Saturn-Uranus square, making it the perfect time to cut cords with the past. Uranus, the planet of radical change, is now direct, bringing an element of surprise and newness.

Your 2022 Horoscope has vital information for the year ahead!

Winning with Mars in Capricorn:

Then between February 4 and February 8, Mars is up to some serious game from its exalted position in Capricorn. During these days, Mars will form a sextile with Jupiter in Pisces and a trine with Uranus in Taurus. This is when all the work we did during January will begin to show bloom. By activating Jupiter, Mars brings us drive and a positive attitude, fueling our ambitions.

The trine to Uranus helps us find an innovative and original approach to our strategies. Under this weather, we can make decisions and take risks with firmness and without fear. The only caveat is that Mars will be in square to Chiron, the centaur of healing. This reads a crisis that makes us relive a wound. But if we face it head-on, we can move from “victim” to “victor.” How we respond really matters, as the sun will be making its annual conjunction with Saturn, sealing the deal on our actions. Sun-Saturn conjunctions bring permanence, so whatever happens now seems non-negotiable.

As Mercury stations direct on February 3, it will remain in a conjunction with Pluto while still in Capricorn. This merging of the cosmic messenger with the god of the underworld could feel like an extension of the retrograde. We will be in deep thought, analyzing our next steps. In a way, Mercury direct in Capricorn will be really useful in helping us build a new foundation for ourselves. Mercury will serve as Mars’ aid in going deep and finding the answers through intense research and uncovering crucial information.

According to astrologer Nina Kahn, who’s partnered with Messenger, “Mercury will be in the post-shadow period of its retrograde for a few weeks after it stations direct, which gives us an opportunity to process the cosmic lessons we’ve learned and get our communications back in order. It’s a great time to circle back to any conversations that were taking place before the retrograde and move forward on decisions that the backspin put delays on.

“Use the forward-flowing post-retrograde energy to follow up on messages that got lost during the backspin and check in on quiet group chats to see how your friends are faring. It’ll be easier to communicate, reconnect with people, and think clearly now that Mercury is direct, so our work projects, social plans, and relationships should flow more smoothly,” she adds.

Then on February 14, Mercury enters what many astrologers believe to be its actual sign of exaltation, Aquarius. In this intellectual air sign, Mercury can really focus on what it does best: looking to the future. From this day on, things will begin to move quickly, as Mercury will facilitate swift movement. Messages will be delivered, deals will be sealed, and although there will be an element of change, there will also be permanence.

A Full Moon in Leo:

While the astrology of February technically only has one lunation, it makes up for two in energy! On Wednesday, February 16 at 8:56 a.m. Pacific Time, the moon will oppose the Aquarius sun to form this month’s full moon. Happening in Leo, this lunation is as grandiose as it could ever be. While we might be encountering feelings between pouring our energy on us (Leo) or the collective (Aquarius), this lunation definitely wants to see us shine!

This is when the astrology of February really gets a boost! Venus and Mars will be perfectly aligned in the sky, bringing a new beginning in relationships, money, and creativity. At the same time, Jupiter in Pisces will be forming a rare sextile with Uranus in Taurus. An incredible amount of excitement will be in the air, and the idea of change and innovation will be welcomed. We will be open to new energies, people, approaches, and attitudes. And luck and fortune will find us when we think outside the box. You can have it all during this time, so dare to think big and go for the gold under this gorgeous full moon.

As we come down from the full moon furor, we say “hi” to Pisces season on February 18. While the season of the Fish is almost always easy and dreamy, it’s set up to be absolutely magical this year. The sun’s entrance into Pisces activates the Jupiter-Neptune conjunction that perfects on April 12. Slowly but surely, Jupiter will get closer and closer to Neptune. And in the meantime, the Capricorn planets will begin to activate Pisces’ healing waters to restore what has been two years of intense astrological alignments.

Lastly, the astrology of February closes on a super-positive note as Venus and Mars form a sextile with Neptune, bringing an incredible opportunity for manifestation. Mark February 26 and February 27 as two days to make a vision a reality.