Neptune in Pisces: A Collective and Individual Awakening to Spirit 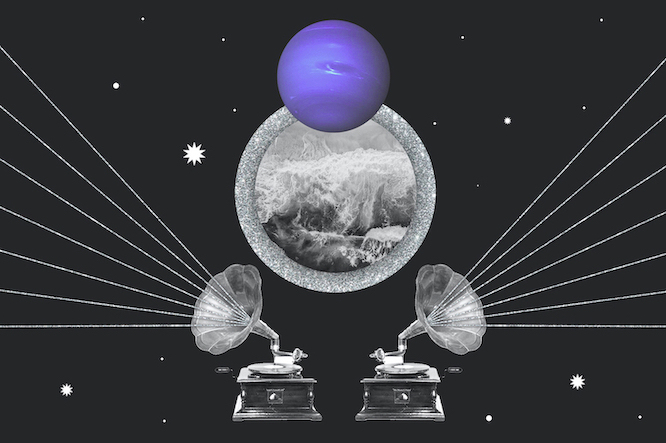 Put on some rose-colored glasses, and look beyond the veil of consciousness. As perhaps the most abstract of all concepts, the mind is what makes every single one of us human. But what happens when the knowledge we acquire—or perhaps bring from another lifetime—isn’t something we can prove as facts, let alone validate with our five senses?

If you’re reading this, chances are you’re an inquiring astrology enthusiast, but despite whether or not you consider yourself a believer, the mystical paradox of this phenomenon continues to challenge the left brain’s logic. Similarly, when referring to the celestial essence of a mystifying heavenly body such as Neptune, there’s no such thing as a “rationale,” as reality goes straight out the window. Although, by that same token, I dare to say, the irony of this planet’s discovery—which is now considered as the outermost major planet in our solar system, according to astronomers—is enough to quench your curiosity.

Every planet has its backstory and unique mythology. It’s similar to the way humans refer back to their family tree and ancestry line, with the exception that many mysteries still remain when it comes to our infinite galaxy. However, there’s something undeniably extraordinary about each of the zodiac archetype’s planetary rulers, and mythic attributes, and Neptune is certainly no exception.

A numinous fantasy, it’s no wonder the blue windy gas giant that governs a mystical sign like Pisces, as it is symbolic of dreams, faith, illusions, and universal love. Its innate elusiveness is nothing short of glamorous and yet, paradoxically, its galactic lure can also be one’s detriment. Everything about this heavenly body is perplexing, but the way it was discovered truly validates its cosmic conundrum, considering no one really knows who actually discovered the planet Neptune. And if you think this is hard to believe, you haven’t seen anything yet.

Neptune was discovered by astronomer Johann Gottfried Galle, together with mathematicians Urbain Le Verrier and John Couch Adams, in 1846. However, evidence states that Galileo Galilei—Italian astronomer, physicist, and engineer—was the first to spot the gas giant while sketching the moons of Jupiter in 1613, per Science X. And as if this wasn’t already ambiguous enough, Galileo had mistaken Neptune for a star at the time, due to its slow movement.

This, of course, couldn’t be more “on brand” with Neptune’s enigmatic essence. Although, if there’s one thing this heavenly body proves is, just because you can’t see something doesn’t mean it isn’t there. And the same happens when looking at this cosmic entity from an astrological standpoint, as it governs the invisible realm and subconscious mind. A symbol of divine interconnectedness and transcendence, Neptune dissolves the boundaries that exist between heaven and earth, reality vs. fantasy.

As always, collective energies are a reflection of the cosmos, both individually and at a macro level. And since Neptune’s last shift into dreamy Pisces back in February of 2012, it’s safe to say we’ve experienced a collective wake-up call, especially when referring to Piscean themes such as compassion, empathy, mysticism, and spirituality.

What’s even more extraordinary about this is that Neptune takes about 164 years to make a complete cycle, as it spends approximately 13 years transiting through each zodiac sign. If you look at it in terms of fate, this era isn’t meant for just anyone, as its influence is generational. More importantly, Neptune is at home in the sign of Pisces, which makes the effects of this transit much more potent. Think back to February 2012; if you know which of the 12 houses in your chart is governed by Pisces, and reflect on your journey via this area of your life thus far.

Truth be told, it doesn’t get deeper than Neptune in Pisces. This transit hasn’t just been about our collective and individual awakening to spirit. It has bestowed the world with a sense of universal empathy—but more importantly, it’s encouraging us to tap into the interconnectedness that unifies us all. And though everything is a work in progress, the scientific developments that took place during Neptune in Aquarius—Jan. 28, 1998 to Aug. 22, 1998—are enough reasons to continue having hope.

If you’re skeptical, then you might think the rise of astrology, reiki healing, lightworkers, and out-of-body experiences in the last decade are merely a coincidence, but that couldn’t be further from the truth. Similarly, Neptune in Pisces is the age of the artist; hence the surge of dancers, musicians, poets, writers, and artistic expression. Art is like magic, and that is Neptune. It all stems from a divine source, and this transit will continue to lead the way.

Slow-moving, nebulous, and utterly mystifying, Neptune will continue transiting through all-encompassing Pisces until 2025. During this time, the collective will continue exploring themes surrounding everything from the relationship that exists between human and spirit, to one’s ability to cultivate their soul mission in the physical dimension. And if you take a closer look at the events that have unfolded since the beginning of this transit, you can probably pick up on the incredible transformation that’s taken place when it comes to the collective’s perception of faith, and divinity.

This, of course, didn’t happen overnight. On the contrary, the meaning of “soul searching” couldn’t be more aligned with the essence of Neptune-ruled Pisces, which has truly been an essential component of our awakening process. There is a universal vibration emanating from each and every one of us, and this transit is here to help us make sense of it. The rise of mental health awareness is also no coincidence, as Neptune governs hospitals and mental institutions.

From now until the end of this astrological transit, the collective’s desire for interconnectedness, and everything needed for an “ideal society,” will continue to dominate the hearts of mankind. Everything from the rise of healthcare reforms—including natural remedies and healers—to the arts will continue to prevail, but by that same token, everything has a dark side.

In the case of Neptune, this heavenly body is equivalent to deception, illusion, and escapism, which means it may or may not be easier to get away with things, even when they’re not necessarily working in our favor. The elusiveness of this transit has been equally as enlightening as it is misleading. That said, it’s important to discern between a world that is divine vs. artificial. One can only pray that this misty downpour of Neptune rain overflows our hearts with universal compassion, but the reality is that things are bound to get a little murky in the process.

The journey of Neptune in Pisces is symbolic of a spiritual completion, but what’s next?

Dreamy Neptune is encouraging us to transcend reality, which ideally requires some sort of connection to spirit, but there’s no telling what could happen in the process. Although, one thing’s for sure: As we continue to break through barriers of consciousness, looking beyond both logic and intuition, the capacity to love will expand along with it. The channels connecting us to a divine source will certainly strengthen, but without faith, there’s no stairway to heaven. You are a spiritual being living a human experience; therefore, your challenge is to elevate while remaining grounded.