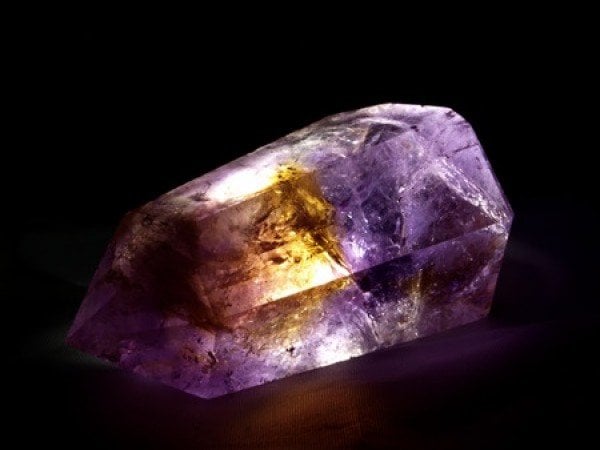 Jupiter entered Scorpio yesterday, and chances are we can already feel the cauldron bubbling.

Scorpio rules sex, death, and mystery. And Jupiter, our largest planet, grants power and influence. So, we are in for a pretty long and wild ride, as Jupiter moves through the universe at a slow pace and will be in Scorpio for a little over a year. Quite often during these cycles, significant secrets are brought to light and the truth is illuminated—both in our personal lives and in the larger world.

As a corollary for Jupiter in Scorpio, there may be no better gemstone than ametrine.

THE POWER OF AMETRINE

Rare and precious, powerful and unusual, this stone has spent much our lifetime shadowed in secrecy. Until recently, natural ametrine (a combination of yellow citrine and purple amethyst, created by variations in the earth’s radiation) was only found in one mine in Bolivia. Due to a complicated sludge of capitalist politicking, ametrines had to be sneaked over the border into Brazil in order to enter the global marketplace.

Once exposed to this powerful gemstone, crystal workers around the world were bowled over by its remarkable potency. The stone’s frequencies link the solar plexus chakra (associated with willpower) with our crown chakra (associated with spiritual growth and development).
Reveal secrets about your romantic past, present, and future…

In the past few years, the secrecy and scarcity around this stone have dissolved – Bolivia’s political environment has changed, and ametrine has also been discovered in other places around the world. Thankfully, its power is now widespread.

And it’s a good thing, too: we are going to need both our willpower and our connection to the divine for the year ahead. By wearing or carrying ametrine, especially in this first phase of Jupiter in Scorpio, we simultaneously accept our own power and humbly behold the power of the great mystery.
Get some ametrine today!