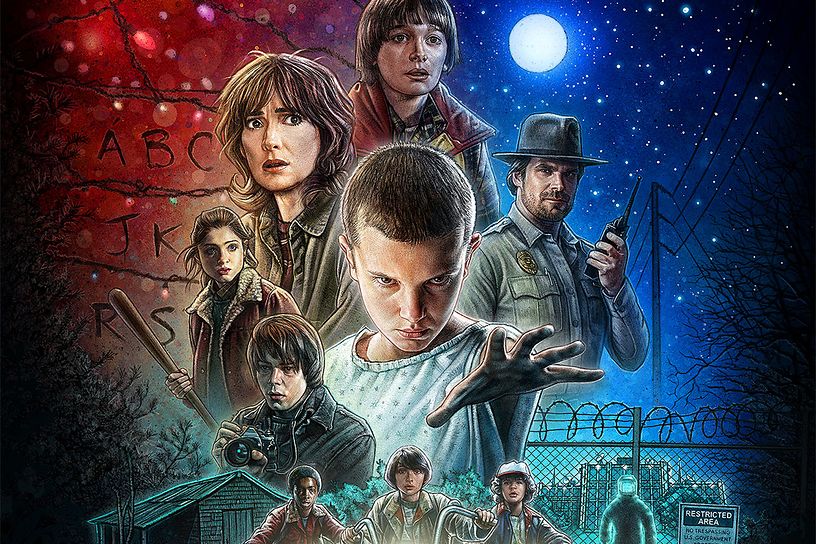 By now, you should have had time to binge-watch both seasons of Stranger Things. If you haven’t, stop reading this now and immediately carve out some time over the next few days to curl up and dig into some serious 80s Netflix nostalgia.
But, if you HAVE already devoted the 14 hours and 10 minutes it takes to watch the series… well, this one’s for you.
Of course, we all know that our sun signs don’t even scratch the surface of our glorious complexity. Having said that, this breakdown by sun sign makes so much sense that it will make the even most skeptical among us (say, Hopper, that old Bull) a believer in the Zodiac as a guide for understanding our relationships to each other and ourselves.
It reminds us of what Dustin tells the librarian so she’ll let him check out too many books on amphibians to learn more about his baby Demigorgon:
We are all on a curiosity voyage, and these signs — these signs are our paddles.

Blunt, competitive, athletic and game for anything, Max comes blazing into Hawkins ready to out-skate, out-play, and out-shout anybody. She’s hot-tempered and can certainly stand up for herself, but she also moves past slights quickly, almost forgetting she was mad in the first place.
Most of all, she craves inclusion in the group, but will not follow any rules she finds to be arbitrary, nonsensical or unfair. She loves to win, bicker, and respond to terrifying situations by showing gung-ho support for her pals. (Red hair and tomboyishness are both classic Aries markers too). When Sheriff Jim Hopper isn’t sleeping in, ignoring all means of contacting him, smoking, drinking, or eating a mountain of sugar, he’s being incredibly stubborn, deeply loyal and protective, or he’s gruffly providing emotional support to someone who has been misunderstood or disenfranchised.
Oh, Taurus, you will always have our hearts. Nancy Wheeler is probably the smartest character in the entire show, but you wouldn’t know it to interact with her. She’s obviously deeply engaged in intellectual pursuits (hello flashcards and straight A’s), but she’s okay with acting a little on the ditzy side for the sake of maintaining social status.
Geminis typically don’t handle guilt well but they are loath to admit complicity and risk looking bad, hence that scene where Nancy, struggling with Barb’s death, gets drunk and reveals a side of herself Steve never saw coming. And if you needed more evidence for Gemini’s traditional two-facedness, there’s her constant back-and-forth when it comes to romantic partners: she just kind of starts sleeping with Jonathan like it’s NBD and then vibes Steve into breaking up with her so she doesn’t have to do it. Nobody does moony like a Cancer, and nobody does moony like Mike Wheeler.
He’s imaginative, emotional, nuanced and sensitive, and full of intuitive solutions to the group’s troubles. He is exceptionally private and will take your secrets to the grave. At the same time, he is guileless and open when it comes to his deeper friendships. When Will comes back troubled and sick from his time in the Upside-Down, Mike doesn’t make a big deal out of it. Mike also nurtures Eleven (or courts her – in Cancer’s world there is no difference) by making her the sweetest little Cancerian fort that ever there was.
Then he spends an entire year in there dwelling on his former relationship which, as anyone who is or has known a Cancer can attest, is totally a Cancerian move.

Lucas Sinclair is magnetic, funny, and will never admit to being wrong about anything, so much so that he’ll fight you about it at a moment’s notice. But it’s almost always good-natured fighting and often it’s actually how he shows that he likes you (here’s looking at Max’s Aries, a classic pairing for Leo).
Lucas takes things way personally and also lingers over his own reflection quite a bit, sometimes second-guessing his looks. But, in general, he’s great to be around. He’s good-hearted and loyal and, while he likes the idea of popularity, he prefers his close group of friends – as long as everyone is honest with each other.
And have you ever seen a better display of classic Leo bravery than Lucas and his slingshot? Neurotic and high strung? Check. Weird pseudo-romantic relationship with a Taurus who stabilizes her? Check. Wildly vacillating between affection and annoyance? Check. But there’s also the side of Joyce Byers that is a less-discussed Virgo trait – a profound connection to the unseen.
Virgo is almost eerily attuned to the hidden spiritual fabric of things, but they can’t always figure out the best way to convey that reality.
In Joyce’s case, on two occasions, it is to stay up all night chain-smoking and spending a lot of money on supplies for intuitively-constructed installation art pieces. Or she’ll try putting a sledge hammer through a wall. Virgo is nothing if not committed. Ah, Libra, the popular jerk-with-a-heart-of-gold of the zodiac.
Pretty, coiffed, and coddled by a small crowd of adoring fans, Steve Harrington sidles into Libra with ease. He then fulfills his destiny there by diligently confronting injustice where he finds it and working hard to improve himself, being great at everything, and also being incredibly committed to his high-school relationship. That is, of course, until he sees that Nancy is genuinely happier with Jonathan, at which point he just lets the whole thing go and washes his hands of it.
Libra is not down for drama, and neither is Steve Harrington. Who has a mysterious past, seething intensity, undeniable charisma, unnerving psychic powers, no fear, and is named after the month they were most likely born in?
Eleven is so Scorpio that she literally burns like a phoenix at the end of Season One and then goes into the underground at the end of Season Two. She is so obsessive in her love that she knows exactly how many days her devoted Cancer partner has been radioing her, but she’s also so possessive that she will kick Aries’ ass.  And, while she and Taurus (Hopper) have a deep and profound bond brought forth by their complementary opposing aspects, their fights are EPIC. No one is more goofy, endearing and good-natured than Sagittarius, the philosopher dork of the group. And, arguably, no one debates, competes, or flirts more with Leo (Lucas) and Aries (Max) – the fire sign trifecta is real, y’all!
Dustin Henderson, with equal parts gullibility, charm, curiosity, and self-reliance, is clearly a Sagittarian. Heck, he probably knows everything about centaurs already, and he’ll probably tell you all about them with so much enthusiasm that you’ll tolerate a half-hour lecture on the creatures!
Also worth mentioning is Sagittarius’ notorious lack of foresight, insistence on getting credit for their ideas, desire to show off to their lovers… and Dustin’s consequential secret cultivation of a demo-dog. Hard-working, dependable, possessed of a strange cult following and above all things true to herself, Barb is a shoe-in for Capricorn.
Barb appreciates her Gemini BFF’s intelligence and studiousness, is less keen on the lack of integrity, and is especially worried about the emminent self-betrayal. Yet even among people she doesn’t really jive with, Barb  is ready to accept their customs – even if just to prove how stupid those customs are. She even, tragically, models the sea-goat’s balance of earth and water in her final pouting scene at the diving board.
(Plus Barb is totally Capricorn because, like her, their influence is keenly felt throughout their social environments even though they are literally never anywhere except their house.) Aquarians are weirdos and they don’t care who knows it. They like being weirdos because they see weirdos as more real. They’re into things like The Clash, but not because it is underground, because it is “real music.” They’re also into things like skulking around in the woods taking black-and-white photographs and then acting only vaguely surprised that people think they are creepy.
But Jonathan, like all Aquarians, is also inquisitive, brilliant and iconoclastic, if a bit aloof. And, while he couldn’t care less about 90% of humanity, he insists on pushing those he does care for toward greater honesty with themselves – including a certain very confused Gemini. (Air sign trifecta is also real!) He’s a bit misunderstood, most of his story arc is spent in a kind of grandiose martyrdom epic, and he has a borderline psychic connection with his opposite-sign mom and maybe the entire world.
Will Byers is the only cast member whose birthday is revealed in the script – born March 22, he’s a Pisces/Aries cusp. Even if they didn’t give that away, though, Will is clearly a Pisces because he loves staring at things with huge eyes, getting lost in his imagination, keeping his pain secret, becoming possessed, and drawing as a primary form of communication.