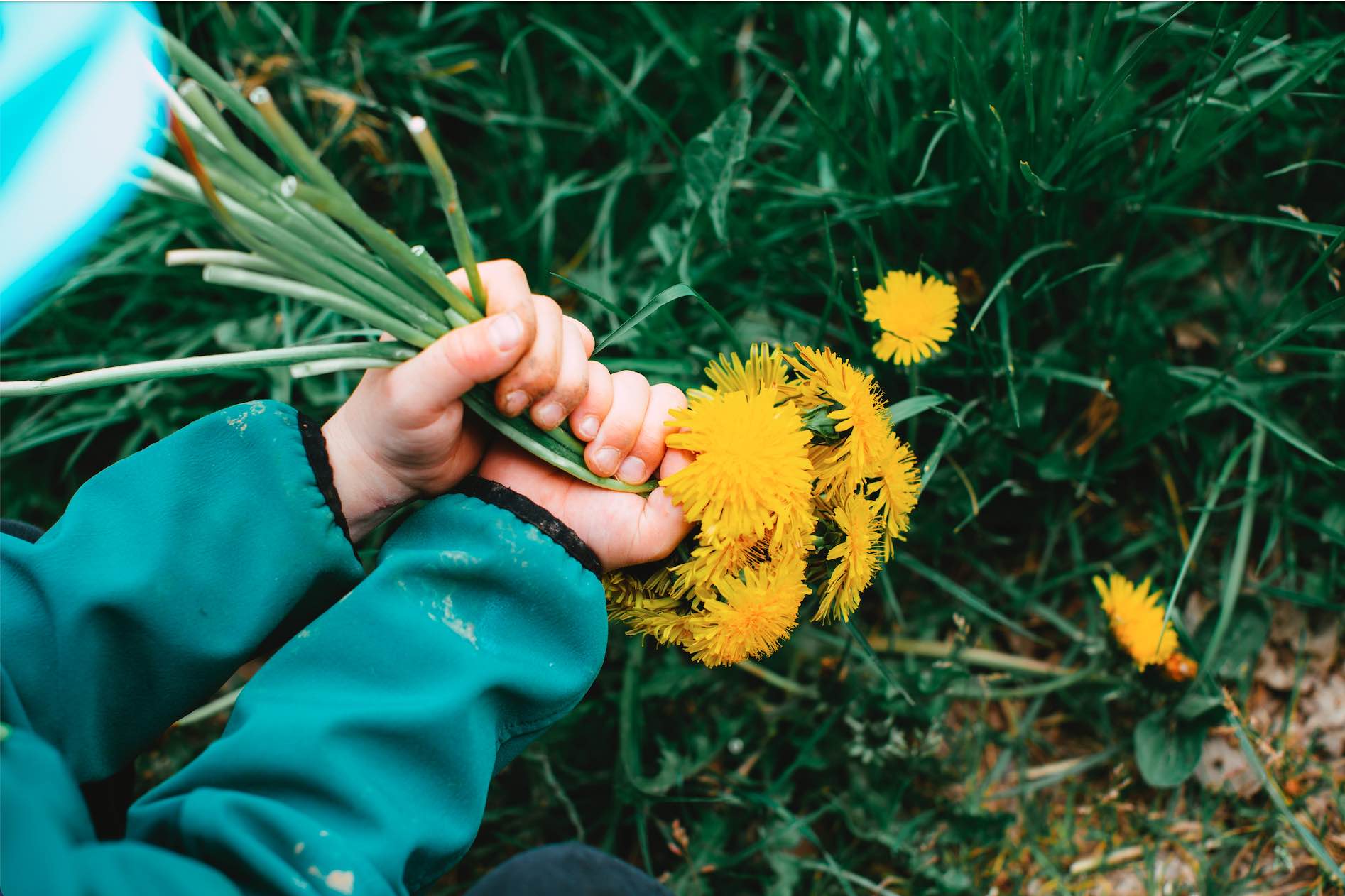 According to the doctrine of Babylonian melothesia—the science of zodiac signs and the human body—it was thought by the physicians of the Classical and eventually the Medieval and Renaissance periods that the seven visible planets have energetic correspondences on Earth, and that their qualities are reflected in our bodies and constitutions. The planets’ qualities were also observed in the flora, fauna, and minerals of our natural world, and held clues as to what cures they were useful for.

Nicholas Culpepper, who had an intimate understanding of astrology and herbalism, is famous for this quote, which reveals the value once placed on astrology and medicine belonging together: “Physick (medicine) without astrology is like a lamp without oil.” Though this cosmology is no longer the prevailing worldview, it is alive and well in the arts of medical astrology, herbalism, and magic, providing a means for us to come into relationship with planetary and plant allies in our holistic practices. Knowing astrology and the qualities of the planets is a “lamp” that illuminates a map to understanding our bodies and their connection to nature and the cosmos.

In this series, we will introduce the correspondences between each of the seven classical planets and the plants they are associated with; we will explore how to see planets in plants so that we can identify their nature. Finding plants in their environments gives us clues as to their uses and qualities, as they have adapted to environments that are similar to imbalances in our bodies we need to treat. Working with these plants medicinally invites their quality into us so that we may take on their balancing effects, helping us enjoy herbs in our daily lives with more confidence and clarity.

Your Vedic astrological chart contains the wisdom of the ages.

[Note: This series is for entertainment and inspirational purposes only, and not intended to replace licensed medical care.]

Jupiter is a planet is known as the greater benefic, meaning it has potentially the greatest power of all of the seven visible planets to bestow good fortune and to support life. One of the brightest stars in our night sky, it was regarded by classical physicians and astrologers as a lucky, helpful, and guiding presence. It represents expansion and optimism and has the ability to aid us in surpassing obstacles in all forms and grow in all directions.

Jupiter signifies the somewhat opposite forces of Mercury. Both are connected to learning and processing information, with Mercury representing the gathering and organization of facts and details and Jupiter representing teaching, mentorship, truth. Jupiter rules over the quest for knowledge, as it relates to spirituality and a sense of the bigger picture in life. Mercury’s forces collect, examine, and analyze, while Jupiter’s forces expand, distribute, and proliferate. This translates in the body as Mercury being connected to the digestion and nervous system functions, while Jupiter is connected to blood cleansing and the distribution of nutrients.

Read me: Martian Plants Will Have You Hot and Bothered

Traditionally, Jupiter was known as a warm and moist planet in its influence, its qualities supportive to a sense of wellbeing, fertility, and general good health. When expressed in the body, Jupiter’s imbalances present as gasses that rise from indigestion and an overburdened liver, and any discomfort associated with inflammation, bloating, and blood toxicity.

The polarity between Jupiter and Mercury, represented through polar opposite signs in the zodiac (Sagittarius/Gemini, Pisces/Virgo) is interesting to note, as Jupiter’s remedies can be warming, relaxing, and expanding, contrary to the dry, anxious Mercurial conditions. Similarly, Mercury’s remedies can have a tightening, toning, and stabilizing effect on Jupiterian imbalances, which tend to produce excesses in tissue functions. We can know Jupiter’s herbs and remedies by their opening, cleansing, and healing qualities, which can be cooling to inflammation or warming to stagnant circulation.

The major organ system traditionally attributed to Jupiter is the liver, with its ability to cleanse our blood, process fats, and continually regenerate and detoxify. It is interesting to note that the liver is the largest of our internal organs, mirroring the expansive size of Jupiter in our solar system. In Egyptian medicine, the liver was believed to be the seat of the soul, with a healthy liver able to produce a happy, brave, and good-natured person. The same way that Jupiter loves to share and distribute, the liver helps to distribute healthy blood and beneficial nourishment to our whole body. Also under Jupiter’s rule are the lungs, the veins, and the ribs. As the liver continually detoxifies, distributes and regenerates, the lungs continually contract and expand, delivering breath and oxygen to our body to support consciousness and life itself.

Is anything in retrograde right now?

Classically, Jupiter rules over two zodiac signs: Sagittarius, a mutable fire sign, by day and Pisces, a mutable water sign, by night. Both can present Jupiterian type constitutions in similar but elementally different ways. Both are vulnerable to imbalances in the liver and lungs, and excess digestive gasses as a result of toxicity. Hot and dry Sagittarius combines with hot and moist Jupiter to create a choleric/sanguine constitution that is susceptible to inflammation and bloating. Cool and wet Pisces combines with hot and moist Jupiter to create a phlegmatic/sanguine constitution that is susceptible to sluggishness and excess mucus. Sagittarius presents more overheating in the lung and liver systems, being vulnerable to heat and moisture being trapped in these organs, producing bronchitis and an inflamed, overworked liver, respectively. The mutable water sign Pisces presents more coolness and dampness in the lungs and the liver, making this sign susceptible to pneumonia, slow lymphatic flow and fats accumulation in the liver.

We can know Jupiter’s plants by their abundance, which mirrors Jupiter’s continual growth and expansion. These herbs tend to grow quickly, and can spread out in large, expansive meadows. They can be big, bushy, and tall, and often have broad, thick leaves. Jupiter’s tendency to dissolve boundaries is mirrored in the way in which many Jupiterian plants grow along water and roadways, and how they tend to overgrow in garden spaces. Often, Jupiter’s plants have pleasant fragrances and sweet tastes, indicating they are comforting and promote cheerfulness. Yet they can also be bitter, promoting bile and digestive functions that help cleanse the liver and blood. Many useful (and delicious) culinary herbs and foods are under Jupiter’s rule, including cloves, nutmeg, oregano, marjoram, rhubarb, basil, licorice, mint, saffron, flax, and pomegranate. Jupiter’s plants sometimes bear flowers that at first bloom yellow, pointing toward their benefit for the liver (yellow bile), and then turn red, indicating they will also cleanse the blood. 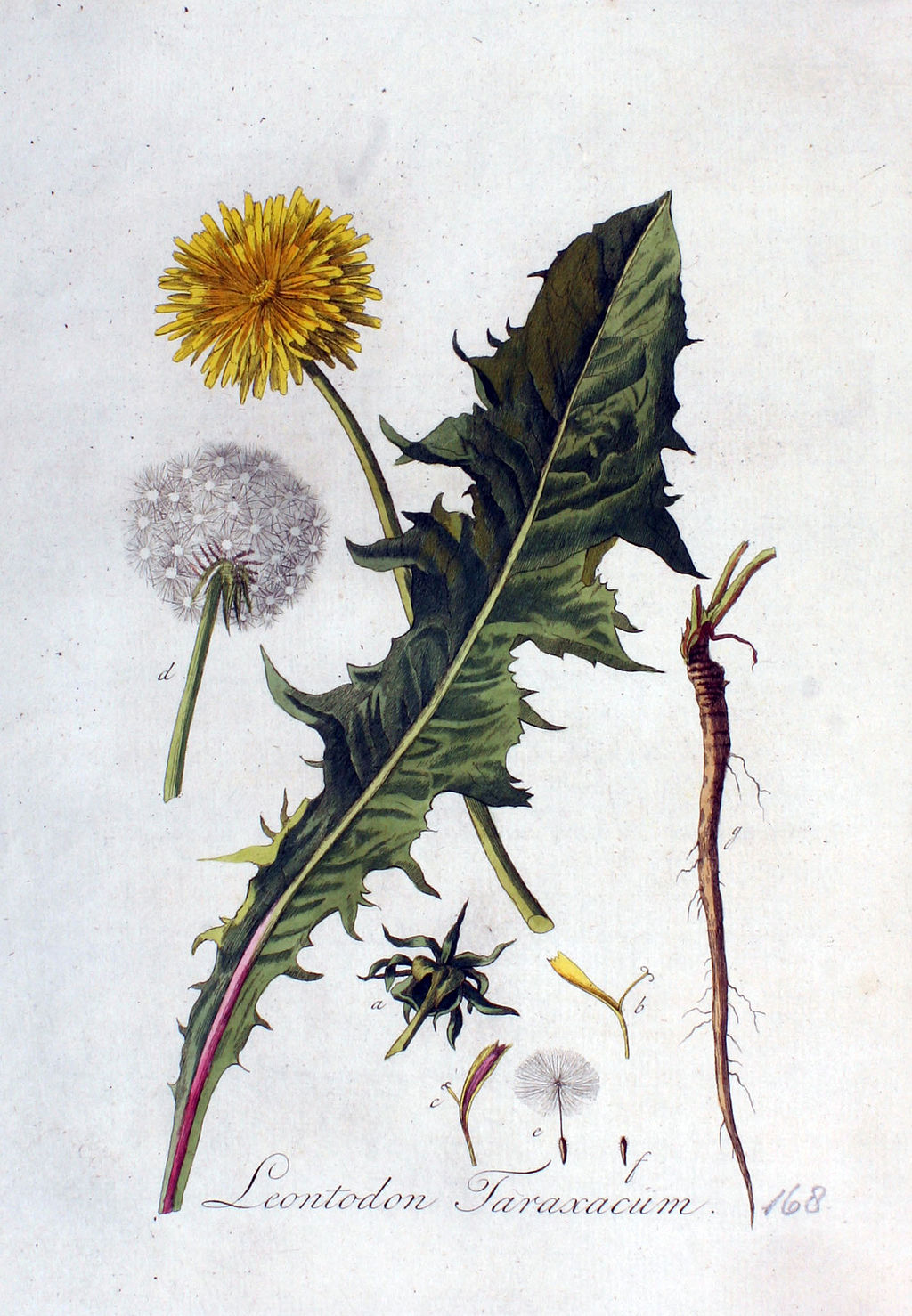 This Jupiterian plant grows almost everywhere, spreading abundantly across yards and fields. The name taraxacum is possibly derived from the Greek word tarraxos meaning “in every place, or all over.” Culpepper regarded dandelion as cold and dry in the second degree, making it moderately powerful to cool and dry excess heat and moisture in the stomach, liver, spleen, and gallbladder. Dandelion’s entire plant has beneficial uses, making it an effective and accessible folk remedy that can be used during all seasons. Its sweet-scented yellow florets are used to make dandelion wine, known for its ability to uplift spirits and promote good digestion. Its leaves are a nutritious bitter green, eaten fresh in salads or steamed, containing vitamins A, C, folate, beta carotene, and calcium.

Dandelion root is as abundant as Jupiter in its benefits. It can be combined and toasted with chicory, another Jupiterian plant, to create a liver cleansing coffee substitute that does not overstimulate and drain our adrenal functions. This mighty root also contains many anti-inflammatory agents and antioxidants, making it protective against cellular damage caused by free radicals in the system. In this function, it has great potential as an anti-cancer herbal. Dandelion is also rich in carbohydrate inulin, a soluble fiber that supports healthy gut flora and eases constipation. It is a known diuretic, meaning it promotes urine flow, which helps reduce water retention and lower blood pressure. And as if all of this wasn’t enough, dandelion root promotes insulin excretion, which helps lower blood sugar levels, and also cleanses excess fats from the liver, which helps to lower cholesterol. It can be taken in tea, tincture, or powdered capsule form. Consult an herbalist for some advice on how much to try. 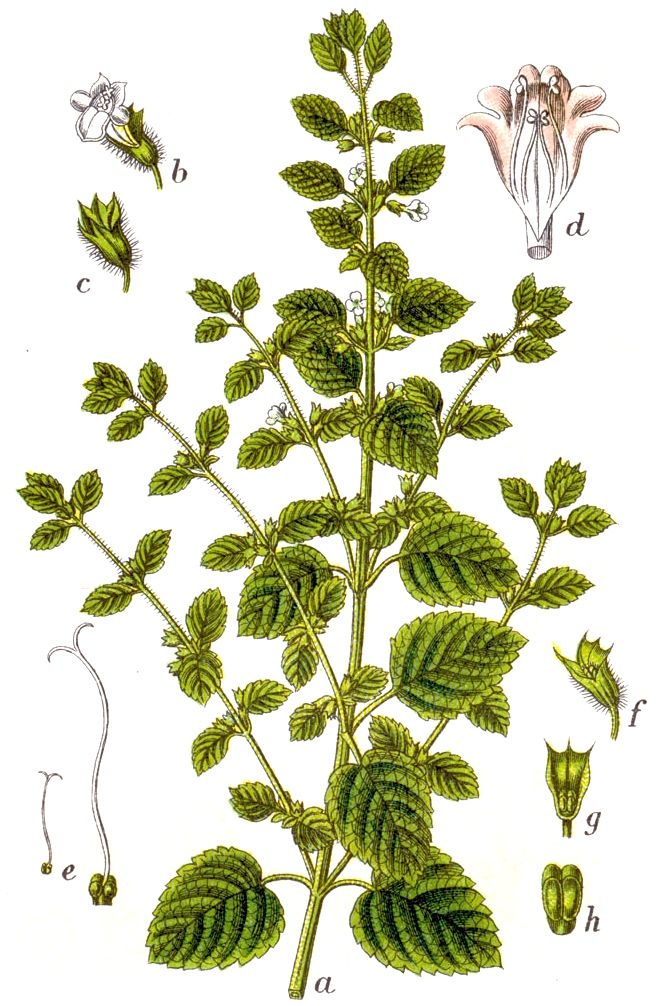 Part of the mint family, this plant was known as “honey leaf” as far back as 300 BC and was called by the Renaissance alchemist and physician Paracelsus “the elixir of life.” The gentle, uplifting fragrance of lemon balm identifies it as a prime Jupiterian plant—its oils are used in perfume making and aromatherapy to promote relaxation and to calm anxiety. Culpepper saw this plant as heating and drying in the second degree, warming and clearing to the liver, spleen, heart, and stomach. Its tea and tinctures help promote nervous system function and digestion, also stimulating bile to help promote liver function. It was said by classical physicians to “purge” melancholy, a state of dryness and coldness in the body that leads to stiffness and depression. Lemon balm has many culinary uses, combining well with other herbs as a pesto or as a candy flavoring. It also blends well with other members of the mint family—spearmint and peppermint—to create a cooling, calming tea that supports digestion. Lemon balm steeped in warm water creates a comforting soak for women who are suffering from PMS. 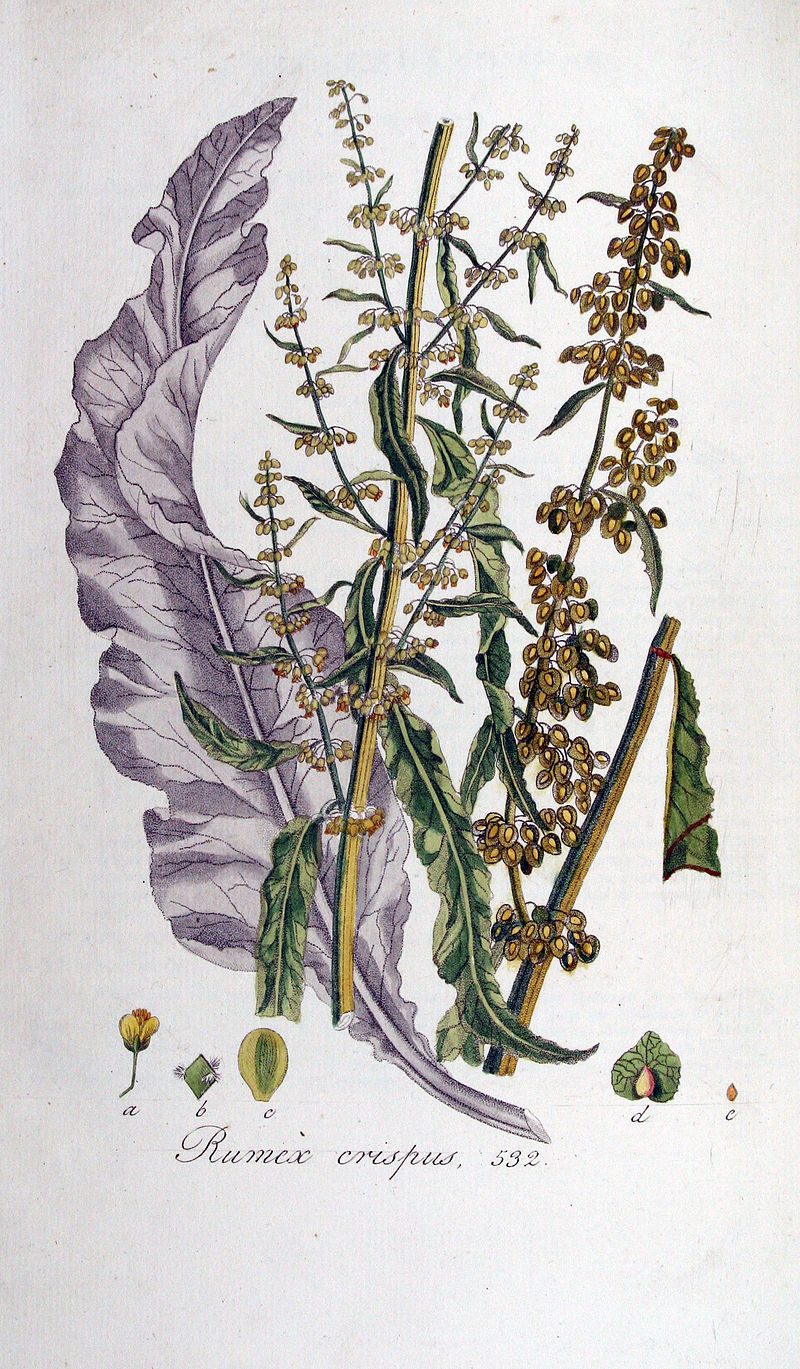 Yellow dock can be found growing like a weed all over the world in meadows, along shorelines, roadsides, and ditches. Chances are you have seen it growing in dry, vacant lots in your local urban landscape, with its broad, green, oval leaves that ruffle and curl at the edges. These leaves can be eaten in salads and carry much of the same minerals and vitamins as spinach. Its seeds, when dried and crushed, can be used as a protein source, and in some cultures have been used as a seasoning. Yellow dock was said to be cooling, drying and strengthening to the liver by Culpepper, who recommended its tea to cleanse and cure boils and infections of the sinuses and respiratory tract. Yellow dock contains powerful antibacterial and antifungal properties, and a poultice made from its leaves remedy the sting of nettles, a plant that it is remarkably often found growing near. Yellow dock contains anthraquinones and glycocides that have a stimulating and laxative effect on the bowels, which helps to ease constipation and to flush out an overburdened liver.