Human Design: A Brief Introduction to the Self-Facing System

Wouldn’t it be great to have a roadmap of our personalities, both the way we were genetically made and how we perceive ourselves? A guide to understanding how we deal with things in our own lives, as well as our interactions with others? Good news: Such a roadmap exists! It’s available through a system called Human Design—a synthesis of quantum physics, the I Ching, and the chakra system (though with nine centers instead of seven)—that shares astrology’s blend of Eastern and Western, as well as its aim in discovering one’s true destiny. Created by Ra Uru Hu (Alan Krakower) in the 1980s, Human Design is also akin to astrology in that it’s based on your time and place of birth.

“Human Design provides an energetic map of how you’re designed,” says Solange Arbesú–Sala, a human design consultant and author. “This is to help us understand how to best use our energy. Human Design is all about energetics.”

A Human Design reading produces an intricate triangular chart called a BodyGraph, full of numbers, shaded lines, and colored shapes. It looks complicated on the surface, but with some guidance, it’s easily navigable. The graph utilizes your birth information to calculate two series of numbers based on the 64 hexagrams of the I Ching—one series each to represent your personality, and on to represent your design 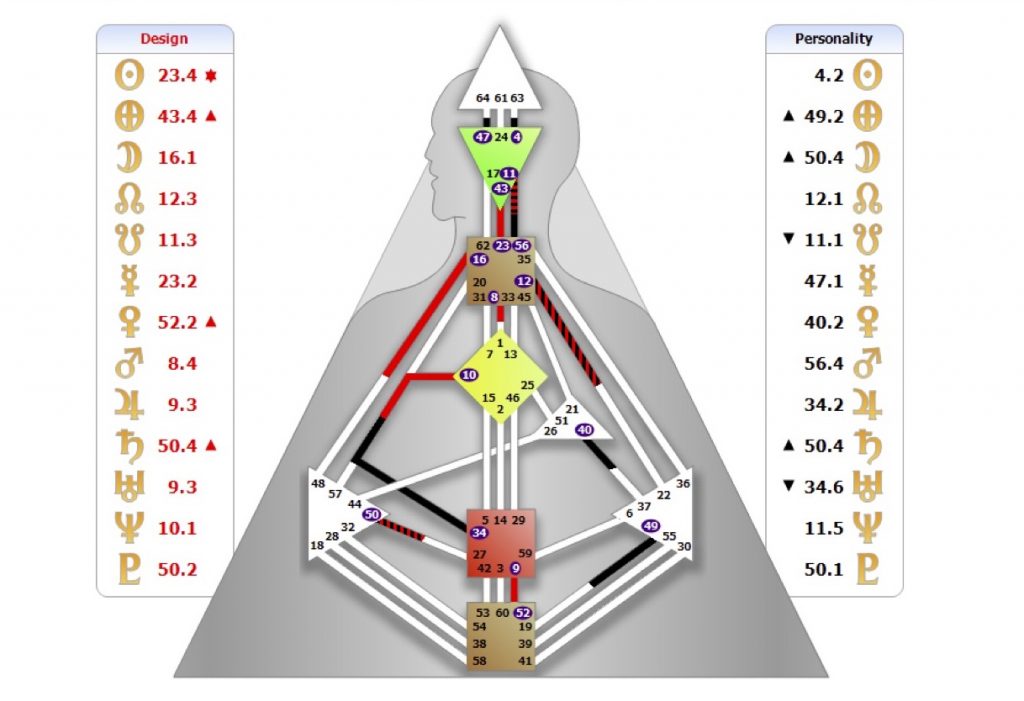 “The design side is calculated based on a moment 88 days before you were born—when you were in the womb. As such, it’s based on what you have genetically inherited from your parents and ancestry,” says Arbesú–Sala.

“Personality is calculated based on the day you’re born, and shows who you think you are, and what you have conscious access to in your personality.” In most charts, the personality numbers are depicted in black and the design numbers are in red.

These numbers determine which chakra centers are defined and consistent within you (depicted by a shaded shape) and which you struggle with (depicted by the white shapes). The ways in which the chakras interact with one another is based on the channels, or lines, between each chakra symbol.

The Tree of Life offers a map to your consciousness…

“When the channel is striped, it means you have that particular aspect, both conscious and unconscious, and you’re always aware of it,” says Arbesú–Sala. “When half of the channel is black and half is red, it’s not a completely conscious channel; you may not always be aware of that aspect of yourself. We tend to think we are something we are not, and we may not be aware of how our energy operates because of that.” The Human Design BodyGraph, Arbesú–Sala says, can bring us into a space of awareness that allows us to clearly see all aspects of ourselves.

Generator
The majority of the population are generators. Basically, this means you want to work, to do things—the more you do, the more energy you have. Generators have an open aura, designed to respond to everything presented to them, moment by moment. When presented with a decision, there’s an energetic push in the body that leads them one way or the other.

Projector
20 percent of the population are projectors. They love to be recognized and noticed, but also take in energy from others all day long, so they need to lie down and rest before they’re completely exhausted. Because they are absorbing everyone else’s energy, projectors are excellent at understanding others and guiding people.

Manifestor
Manifestors make up nine percent of the population. They don’t wait for anything to realize their dreams, instead going out on their own and accomplishing what they can. But, they don’t want to be stopped or inhibited in any way from doing what they set their mind to. Manifestors are hard people to read, and tend to explain their intentions from the get-go to put you at ease.

Reflector
These are the rarest types—only about one percent of the population are reflectors. For reflectors, environment is incredibly important, as it manifests into their mood (if in a boring meeting, the reflector will be bored). It takes reflectors a long time to make a decision because their opinion of the world changes by the day.

What do the stars have in store for you this year?

The BodyGraph further drills down your type into your not-self theme (how you feel when you’re going against what your body wants), your strategy (how you deal with life on a moment-to-moment basis), and your inner authority (the part of your chakra system that determines the decisions you make).

It’s important to remember that no matter what type of person you are, it doesn’t make you better or worse than anyone else. It’s just how you’re built—and knowing that can go a long way in creating and maintaining good relationships.“ When you understand how your Human Design operates, you can better navigate your own self and your understanding of others,” says Arbesú–Sala. “And that understanding makes you more compassionate.”