Jupiter in Pisces Will Bring Prosperity, Optimism, and Expansion to Our World 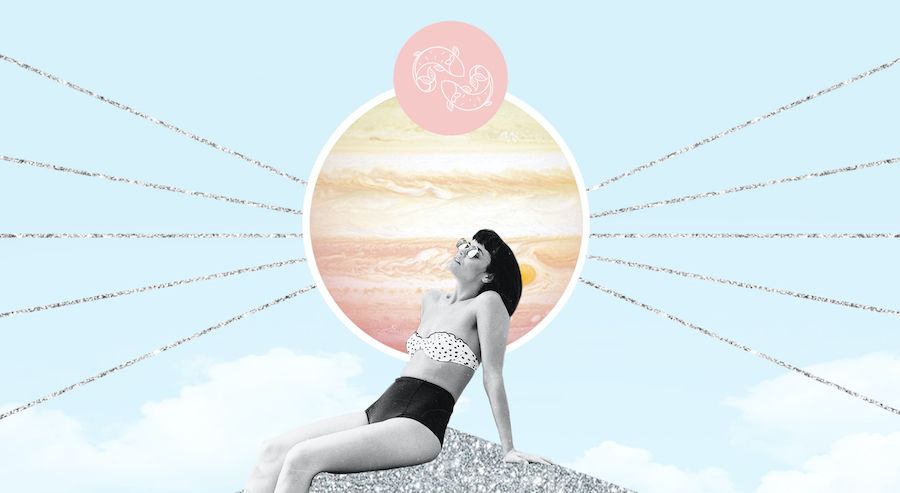 Jupiter will enter its watery home of Pisces on May 13, where it will directly express its jovial qualities until July 28. After moving back and forth through the airy realm of Aquarius during the second half of 2021, Jupiter will re-enter Pisces at the end of 2021 on December 28.

The sovereignty of Jupiter occupying one of the signs it rules makes it more effective in providing uplifting support and inspiring hopeful visions that support life and abundant growth. Within the oceanic realm of Pisces, the waves reverberating from Jupiter will bring an elevated lift as we sail the stormy seas of collective change so we may recover from setbacks and make it safely to the shore of our destination.

Jupiter is a planet of prosperity, optimism, expansion, and enthusiasm that enlivens the imaginal waters of Pisces. Within a grotto with gushing springs and frolicking nymphs, Jupiter in Pisces creates and directs from an embodied sense of soulfulness nurtured by the inwardly directed nature of the water element.

Since the moist quality of water assembles, combines, and unifies external sources of inspiration, Jupiter in Pisces facilitates synthesizing meaning and distilling wisdom from our experiences, generating new mixtures of ideas in the process. Jupiter in Pisces lends the daring needed to plunge into the depths of inner seas to discover treasured wisdom sunken deep below the surface of our everyday awareness.

In contrast to how Jupiter will rush forward in its fiery home of Sagittarius, Jupiter in its watery home of Pisces slows down its pace so that it may be receptive to revelations and more thoroughly integrate insights. The watery nature of Pisces dissolves rigid frameworks and structures, enhancing the capacity of Jupiter for being flexible and adapting vision so we may reconcile and mediate whatever difficulties and obstacles arise.

Yet, while the ability of Jupiter in Pisces to be malleable and adjust to changing circumstances will be helpful in navigating the disruptive changes that will occur in 2021, the boundless nature of Jupiter in Pisces will require us to apply disciplined focus to its fertile creativity to be productive.

There will be a great deal of volatility in collective events during the first period of Jupiter in Pisces that lasts from the middle of May to the end of July. Jupiter will enter Pisces less than two weeks before a total lunar eclipse in Sagittarius on May 26 that will form a catalyzing square aspect with Jupiter.

While eclipses tend to bring important endings and beginnings in our life that can be unexpected, there will be additional instability amplified by Saturn in Aquarius forming its second exact square aspect with Uranus in Taurus on June 14.  Fortunately, Jupiter in Pisces can help absorb the insight needed to accommodate new concepts and directions as well as guide us in gathering supportive resources we can coordinate to address whatever needs repair or reform.

After Jupiter returns to Aquarius on July 28, it will occupy the same sign as Saturn in Aquarius until entering Pisces at the end of the year on December 28. During the period that Jupiter is sharing the zodiacal space of Aquarius with Saturn, it will be under the rulership of the cold, distant ringed planet that governs consensus reality.

As a result, the imaginative visions we cultivate during the first period of Jupiter occupying Pisces will need to meet the hard reality of Saturn once Jupiter returns to Aquarius. Utilize the second half of 2021 for addressing whatever aspects of your plans need to be modified to be more effective. Once Jupiter returns to Pisces at the end of the year it will provide support for brainstorming inventive ideas and renewed goals.

Let your imagination run wild while Jupiter is in Pisces. The more you can deepen into your passions, the better that Jupiter in Pisces can give you a boost in following a more fulfilling calling with your work in the world. Follow where your intuition guides you, remaining open to new perspectives and resources, devising an alteration of plans when necessary. Jupiter in Pisces is a boon for finding faith in the unknown and receiving the support available in your environment.