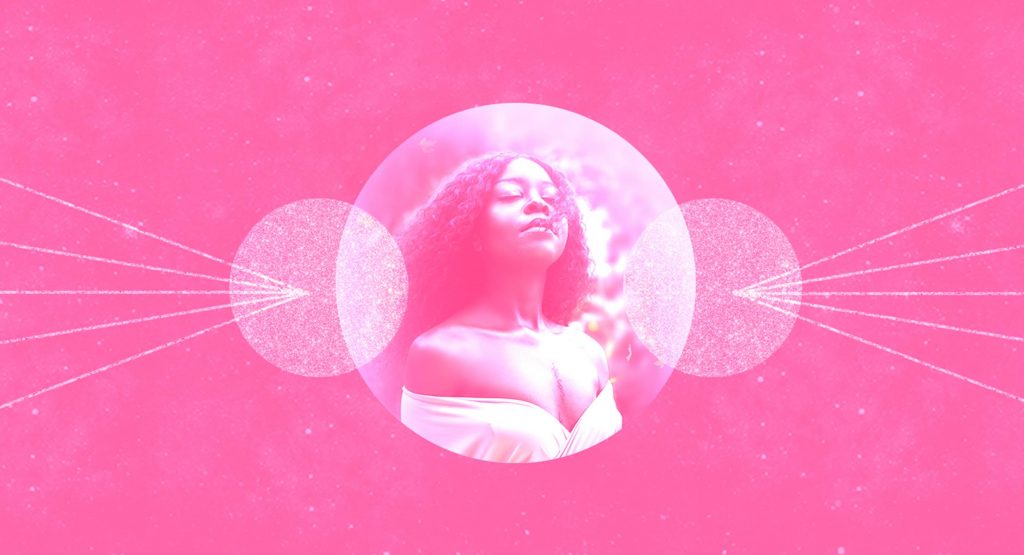 Emotions run hot under the Aries full moon. And with this one activating some particularly intense astrology, many of us may feel like we’re reaching a boiling point. Tensions and frictions that have long simmered underneath the surface are now bubbling up and demanding to be expressed.

This is thanks in part to the Pluto/Eris square—a battle of wills between the “lord of the underworld” and “goddess of discord” that’s been stirring up conflict and controversy for the last two years. While this aspect was exact for the fifth and final time on October 8, its energy is still extremely strong. And with the moon conjunct Eris in Aries, a sun/Mars conjunction in Libra opposing her, and all of them squaring off with Pluto in Capricorn, this lunation presses upon some hot-button issues.

This energy is also playing out in relationships, pitting our personal autonomy and authenticity against our consideration for other people’s feelings and preferences. Often, for the sake of keeping the peace, we try to avoid conflict and confrontation. But at this October full moon, our differences won’t be smoothed over so easily—and the emotional stakes may be too high to worry about being polite.

Read me: Asteroid Vesta in Scorpio: Tower Moments and Transformations

What Does the October Full Moon in Aries Mean?

Letting out our anger, fear, and frustration (or any other “negative” emotions) empowers us to finally do something about the underlying issues. That said, we’ll want to be careful with what we express in the heat of the moment. Aries, after all, moves at a fast-and-furious pace. So while emotions can flare up quickly at this full moon, they could also end up flaming out just as fast. Before reacting in pressure-cooker situations, take a moment to breathe. It might stop you from doing or saying something you’ll want to take back later.

Now that Mercury retrograde is over, communication channels are opening again and we can navigate hard conversations with more diplomacy, tact, and grace. With Mercury in Libra opposite Chiron in Aries, we could finally find our voice to confront someone who’s hurt or wronged us in the past. But make sure to choose words that promote healing, not perpetuate harm.

After all, Mars in Libra (who rules this lunation) is a lover, not a fighter. But some relationships are worth fighting for—so right now our energy might be better spent repairing, rather than burning, bridges. This lunar cycle began with Mars conjunct the Libra new moon (October 6). And now, with the Aries full moon opposite Mars, we may be ready to try seeing things from each other’s perspectives.

The challenge is to coexist harmoniously together without compromising our own inner peace. And while this may be easier said than done, Mars’ trine with Jupiter in Aquarius supports us in making our best good-faith effort. Instead of getting all fired up about what divides us, we can give each other the benefit of the doubt as we continue reaching for connection and common ground.

Read on for your sun and rising signs to learn more about what this full moon means for you.

Horoscopes for the October Full Moon

It’s nice to be important, Aries. But at this full moon, it might be more important to be nice. After all, there’s more than just your own reputation to think about right now. Your actions are also reflecting on some of your closest associates—so consider the potential impact on them before doing anything brash.

Just when you’ve perfected the balance in your life, Taurus, something comes along to upset the apple cart. As frustrating as this is, though, try not to sweat it too much. It’s just this full moon’s way of reminding you that discord and dissonance are as much a part of life as peace and harmony are.

“Creative differences” have been the demise of many artistic collaborations. And at this full moon, Gemini, a group effort you’ve been involved with seems headed for a similar fate. Still, it might not be too late to get everyone on the same page—as long as someone (i.e. you) steps up and takes the lead.

To feel at peace within yourself, you sometimes have to disturb the peace—to risk putting yourself out there and taking a stand for what you feel is fair and right. And Cancer, this full moon could be one of those crucial moments for you. Just make sure to pick your battles wisely.

All’s fair in love and war, Leo. Still, at this full moon, you may be shocked to realize how ruthlessly self-interested some people can be. It may be worth investigating, though, why this makes you so hot and bothered. Perhaps the real issue is that you need to fight harder for yourself.

Much like the Lannisters on Game of Thrones, Virgo, you always pay your debts. And nothing makes you madder at this full moon than others not honoring their debts to you. But don’t let your resentment keep building up over unpaid loans, unreturned favors, or unkept promises. Instead, try giving them a gentle reminder.

“That’s okay…” “I understand…” At this full moon, Libra, you shouldn’t utter these words unless you really mean them. If someone else’s selfish or inconsiderate actions are negatively impacting your life right now, you have a right to call them out on it. Pretending that everything’s fine isn’t fair to you or them.

Get in-depth astrological and Tarot content in your inbox! Join our newsletters!

“Anger can be power/Do you know that you can use it?” At this full moon, Scorpio, channel your inner punk-rocker and take your cues from The Clash. The anger you’ve been holding in is demanding to be expressed. But don’t just take it out on others—find something practical and purposeful to do with it.

No risk, no reward, Sagittarius! If you’ve been playing it safe lately, this full moon could entice you to take some bigger, bolder chances. Still, you don’t want to gamble too much right now—especially not with your health, safety, or future. Before going “all-in,” take stock of the potential gains and losses.

From one extreme to the other, Capricorn—that’s how life seems to be going at this full moon. But you don’t have to let it drive you to extremes. While you may not have much control over external circumstances right now, you can choose to respond to the chaos in a balanced, reasonable way.

What does your wise mind say, Aquarius? At this full moon, the contrast can be quite jarring between what you understand on an intellectual level and what your gut instincts and knee-jerk reactions are telling you. But the truth is likely somewhere in the middle, where emotion harmonizes with logic and reason.

In romantic and business partnerships alike, money can be a major source of strife. But Pisces, it doesn’t have to be this way. If you and your partner have been disagreeing about how to manage shared resources, this full moon is a time to reconnect with your shared values and vision.