Don't Vibe With Your Sun Sign? This Could Be Why 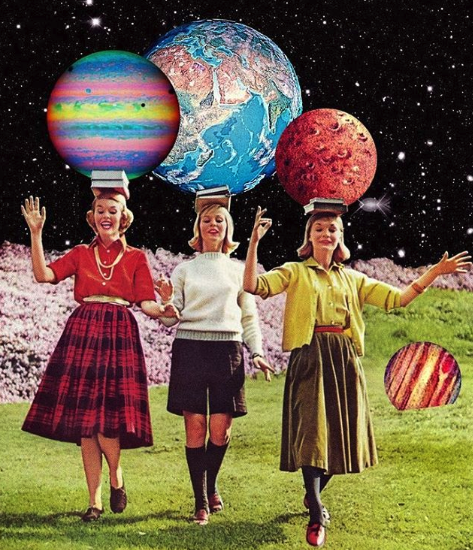 Astrology is complex—and understanding the vast quantity of layers involved doesn’t happen overnight. Which is all the more reason that it can be frustrating when astrological naysayers attempt to debunk the practice by claiming they don’t identify with their sun sign. (Pro tip: Try reading your horoscope based off of your rising sign for some spooky accuracy.) The truth is, if you’re basing your astrological profile on your sun sign—representative of your outer self and persona—alone, you’re doing it wrong.
What do you want out of this life?

That many don’t identify with their sun signs is valid—and sometimes, a stellium may be to blame. If you have three or more personal planets—sun, moon, Mercury, Venus, Mars, or, in some stellium camps, Jupiter—in a particular sign or house in your chart, it’s called a stellium. If someone has a stellium, he or she will exhibit and be influenced by the common traits associated with that sign or house. For example, imagine a Cancer sun who never cries, hates being at home, can’t commit, and can’t stop talking. Sounds bizarre, right? A Cancer who has a Mercury, Venus, and the moon all in Gemini (a Cancer with a Gemini stellium) would exhibit all of the aforementioned traits that seemingly contradict his or her traditional sun sign characteristics.
Not sure if there’s a stellium in your chart?

Stellium energy is a very real thing, but so are the planets involved. The planetary energy directly impacts how you express your stellium energy and behavior. If your moon and Venus are involved, your emotions and the way you give, offer, and process love will be influenced by your stellium sign rather than your sun sign. If your Mercury, Mars, or Jupiter are involved, your stellium energy will manifest in an intellectual, driven, or indulgent nature.
As for houses, in astrology the chart is broken up into 12, each sign aligning with a “house” or area of life. The way the houses are divided begins with and depends on your rising sign. Often times, two signs are represented in a single house. For example, if you’re a 20°

Read Me: How Your Natal Venus Can Help You Cultivate Connection

Virgo rising, your first house would include the rest of Virgo and the start of Libra. This is how many stelliums are formed: If someone has a Mercury in Virgo at 25°, Venus in Libra at 4° and a Jupiter in Libra at 12°, this would be a first house stellium. Those three planets all land in the first house of the birth chart.

This chart would tell us that the person communicates like a Virgo, gives and receives love like a Libra (hello, hopeless romantic!), and absorbs information like a Libra. But the fact that they all sit in the first house, which is ruled by Aries, means that he or she would also exhibit many Aries characteristics. He or she would be adventurous, courageous, hardworking, a little self-centered, and a born entrepreneur.

It is possible to have more than one stellium in your chart—meaning your blessed with two or more strong areas of focus in your chart and life. Once understood, stelliums serve as a guiding light in our charts that help us understand our personality and existence on a deeper level.