Best Tarot Decks of 2019: Creative Cards for the Modern Reader 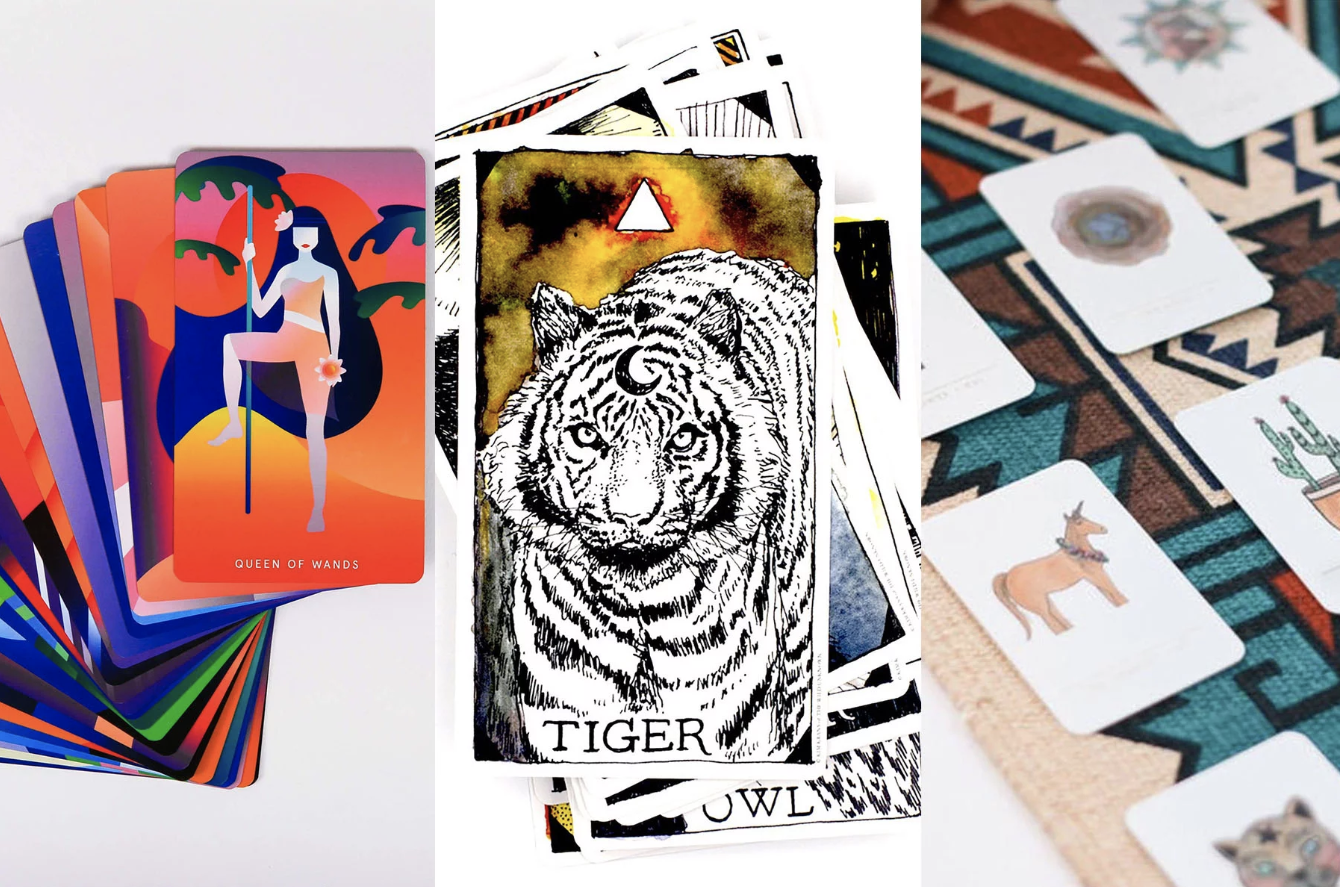 Becoming more and more popular in today’s modern-day culture, Tarot is an alluring form of divination that has captured the likes of almost everyone. And it’s easy to see why. With astrology dominating the conversation at every turn alongside reboots of all of our favorite spooky shows (see: Charmed, The Chilling Adventures of Sabrina), it’s hard not to enjoy the amplified interest in the occult these days—and that includes Tarot.
Read me: This Is Your Sun Sign’s Twinning Tarot Card

For many, Tarot is a life-changing tool that allows us to tap into our higher selves. Through symbolism, imagery, and the mixture of these other divinations, Tarot provides access to our conscious and subconscious.

What started as a deck of playing cards in the mid-18thcentury has since evolved and folded into other types of divination, such as astrology and numerology. For example, the Rider-Waite deck, that classic deck you see clichély spread across a mystic’s table situated next to a crystal ball in most eerie films, incorporates both astrology and numerology in its imagery and card meanings.
This Tarot reading will help you navigate the ups and downs of romance.

But for anyone unfamiliar with the practice, fear-invoking cards such as “Death” or “Devil” (and what they could symbolize) may be reason enough not to partake in readings.

Here’s the contemporary truth: Tarot is not scary and anyone can learn how to read cards (yes, even you). When it comes to picking a Tarot deck, there’s one out there for everyone. For instance, a deck with animal imagery may speak louder to one person than another.
Read me: 8 Signs You’re Ready to Read Tarot Cards Professionally

Establishing a relationship with your deck is important—and that means starting from the day you choose it, onward. So if you feel like dabbling, check out our favorite decks of 2019 to see if you feel a connection. (Pro tip: Any Tarot reader will tell you that a gifted deck can oftentimes be more effective than one you’ve bought for yourself. If you’re shopping for your BFFs’ next birthday present, this could be the ultimate supernatural gift that keeps on giving.)
Read me: We Conjured 6 Witchy Podcasts for Your Listening Pleasure 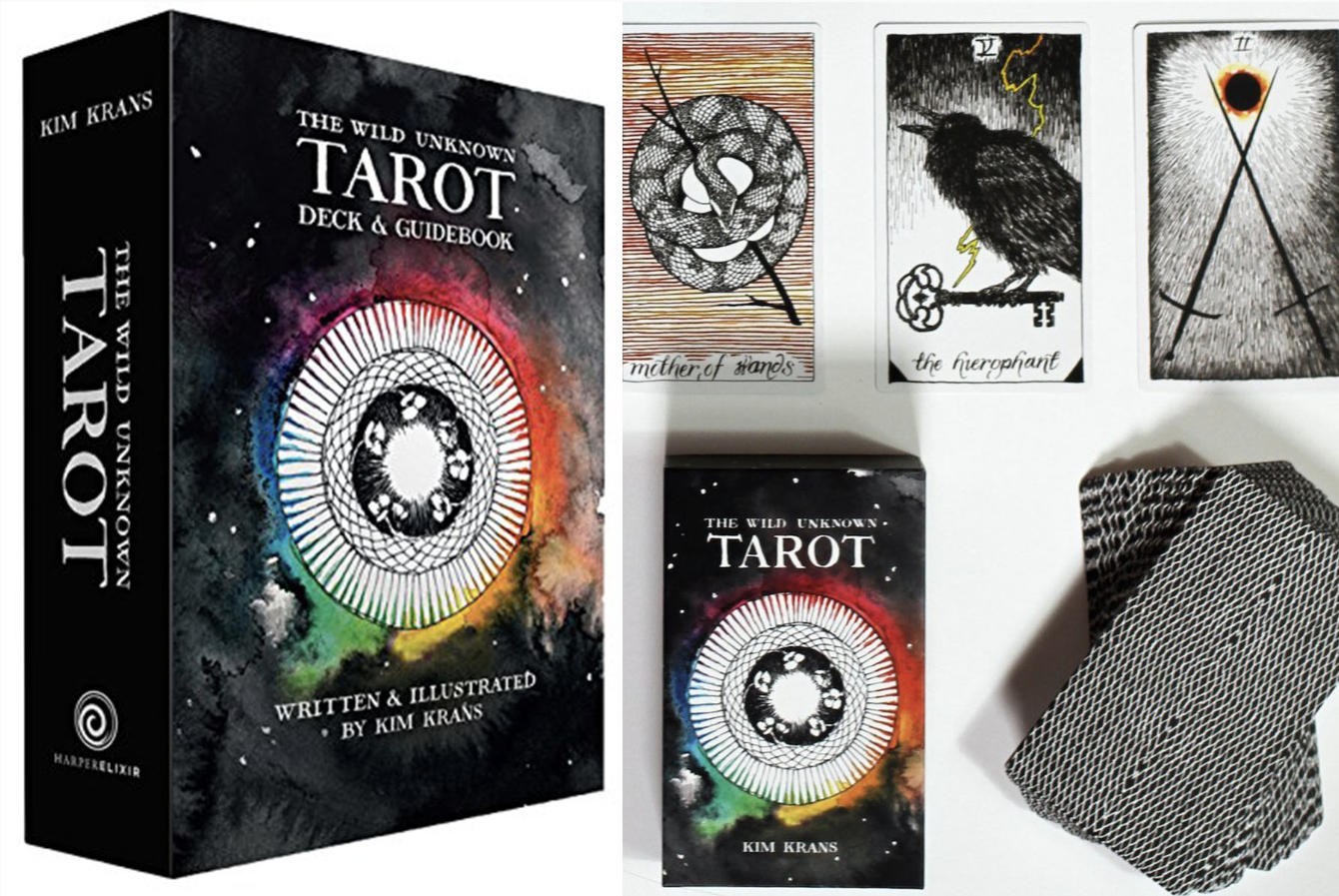 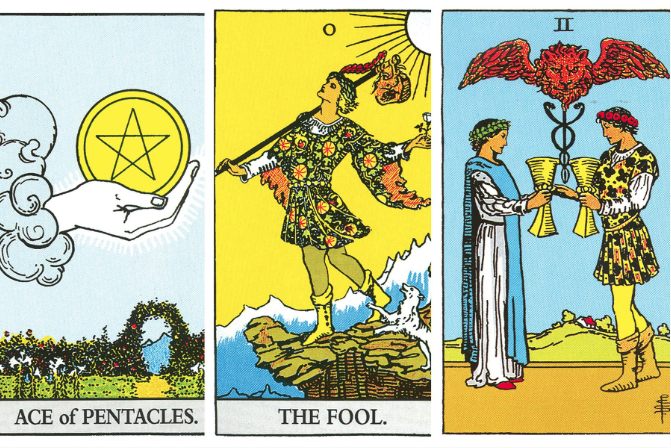 , $15.60
You can’t go wrong with the traditional deck! Originally published in 1910, the Rider-Waite deck serves as an excellent gateway for novices to familiarize themselves with the Tarot’s symbolism. The full-scene depictions on each card provide clues to each card’s meaning. (Pro Tip: Get the deck in another language to add an extra level of intrigue. I haven’t put my Spanish deck down since I was gifted it!) 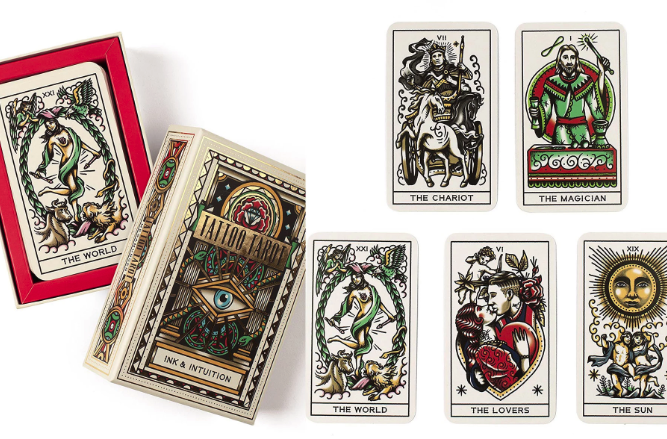 , $16.19
The art in this deck is inspired by Megamunden, the author of the best-selling Tattoo Coloring Book

. This is a complete deck that offers a modern, hip(ster) take on the Tarot. It comes with a 28-page guide book that delves in interpretations and the basics of conducting a reading. 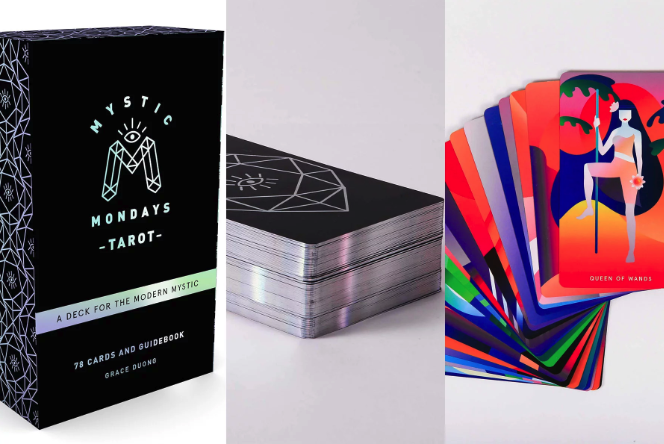 , $19.19
Complete with holographic edges to wow at any party, this deck offers a bright and fresh contemporary spin on the traditional set. 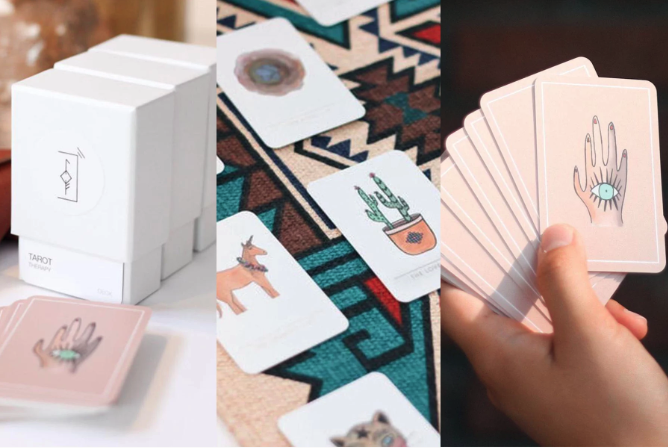 Courtesy of Etsy
Minimalist Tarot Deck, $36
This chic offering is a major arcana deck. The boxset comes complete with a piece of Kyanite and a downloadable app as a guide book. This deck is perfect for the minimalist in your life who needs to add some witchy flair to his or her coffee table book collection. 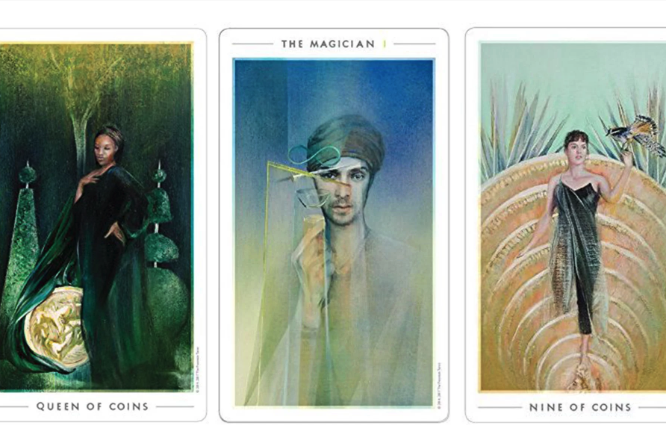 , $26.28
This deck very well could be the Birkin bag of tarot decks, with original art by Jonathan Saiz, each card has a stunning, ethereal depiction. The set comes complete with a guidebook that explains how to read the cards and develop a connection. 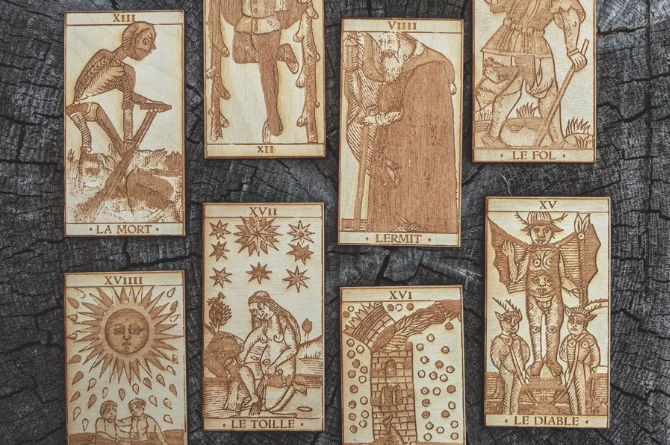 Courtesy of Etsy
Wood Engraved Tarot Deck, $79
Cut on Baltic Birch, each card is a replica of the 17th-century French Tarot De Marseilles deck designed by Jean Dodal. It’s a 22-card deck that features the original French text on each Major Arcana card. 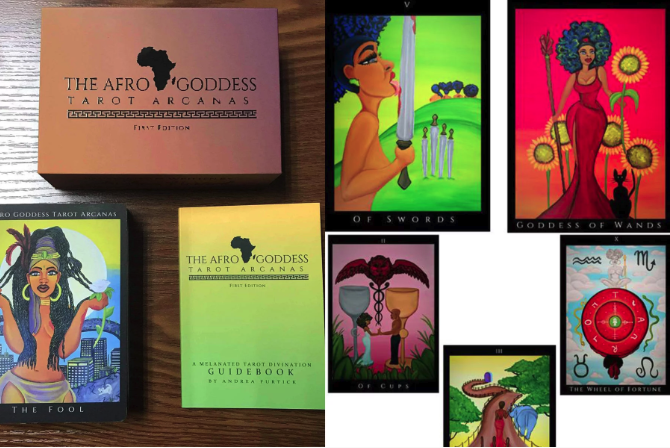 Courtesy of Etsy
Afro Goddess Tarot Deck, $69
Yas, queen! This deck has a spiritual connection to Africa with stunning imagery of Goddesses. It’s a 79-card deck, and each card is hand-painted. 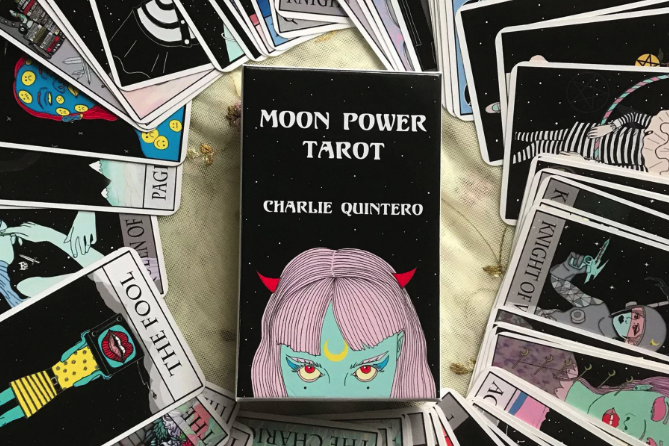 Courtesy of Etsy
Moon Power Tarot Deck, $52.80
This handmade boxset offers an out-of-this-world update on the traditional tarot’s imagery. Each deck is made to order and takes 2-3 weeks to arrive. 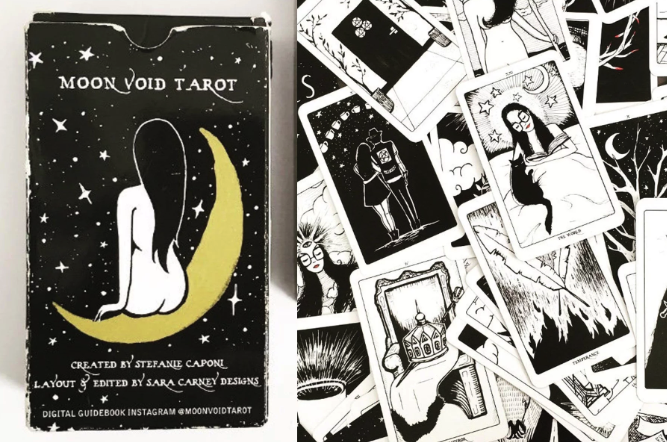 Courtesy of Etsy
Moon Void Tarot Deck, $40
This mostly black-and-white deck is a complete deck that’s illustrated by Stefanie Caponi, a practitioner of various magick for more than ten years. The images are inspired by Caponi’s interpretations of each tarot card and its symbolism. 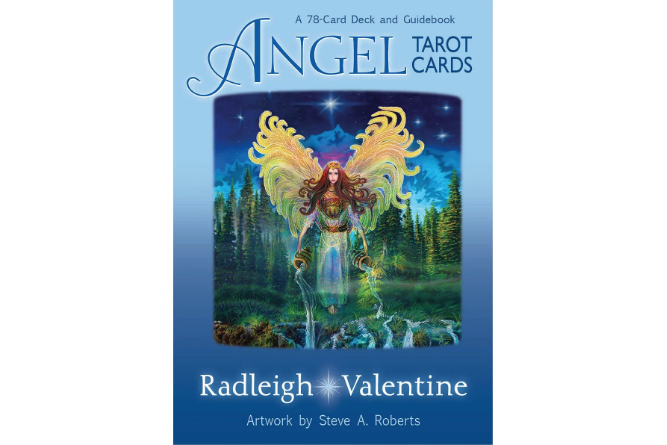 , $17.65
A longtime go-to for many readers, this deck features angels, archangels, unicorns, fairies and more to deliver the Tarot’s messages. The guidebook offers advice on how to conduct a reading on others and suggestions on how to interpret each card. 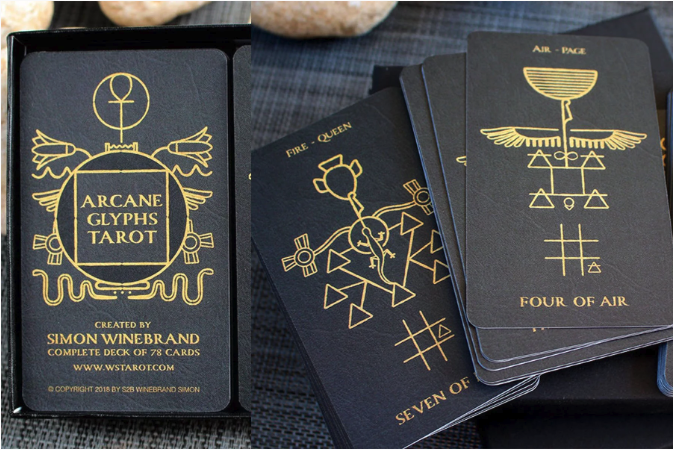 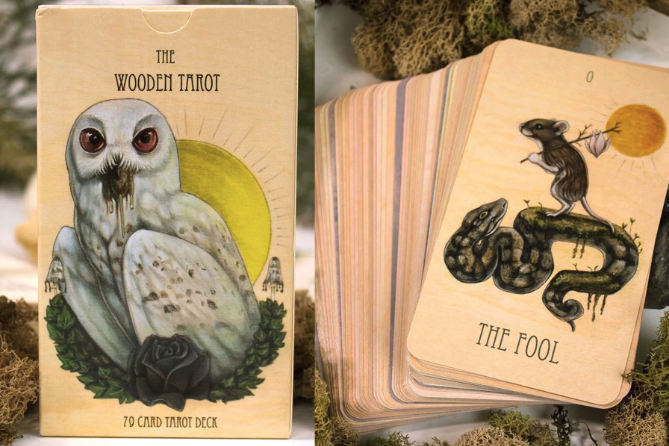 Courtesy of Etsy
The Wooden Tarot Deck, $40
Woodland animals are the theme behind this deck. Unlock your mystical side through stunning, and sometimes haunting, animal artwork.