This Is Your Sun Sign's Twinning Tarot Card 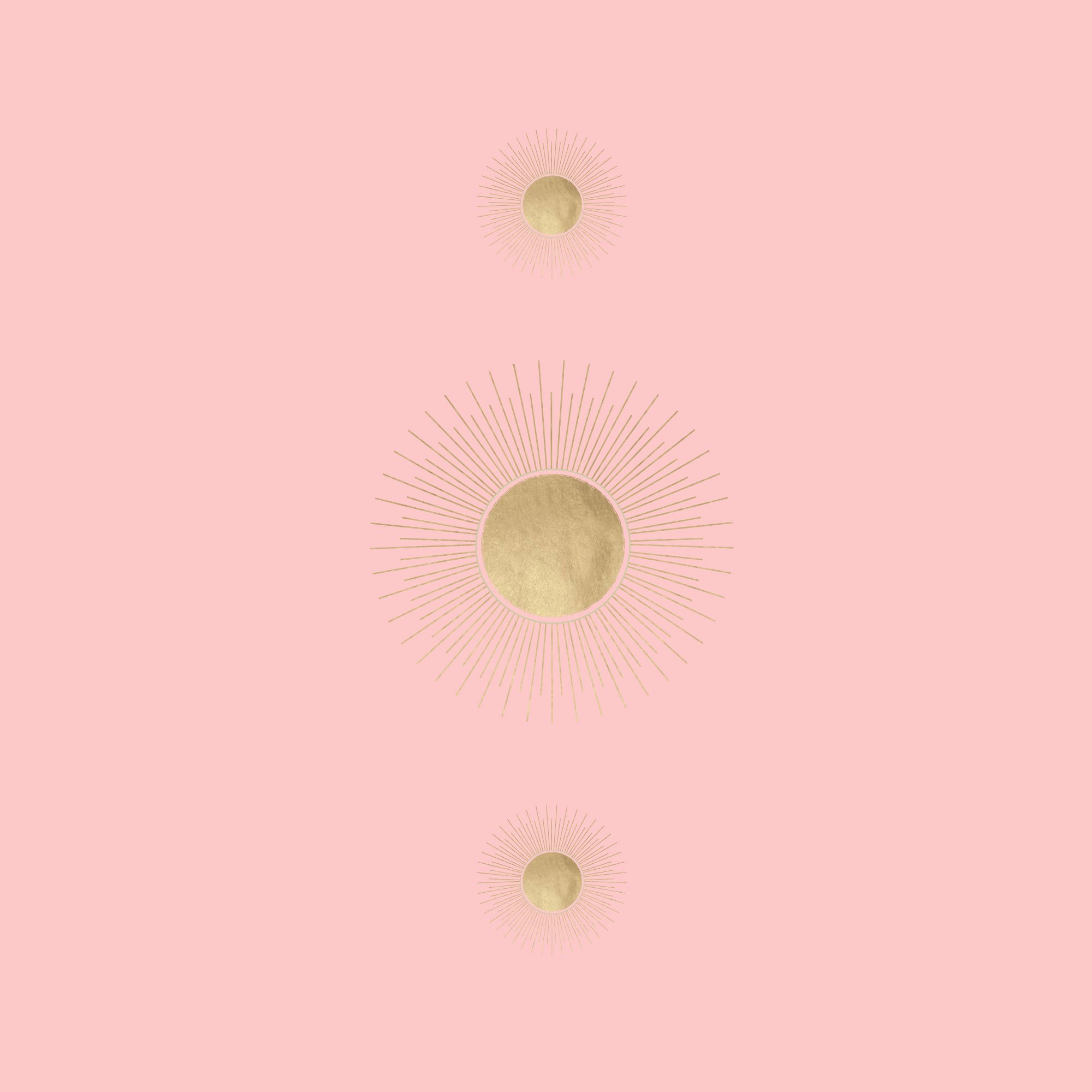 Once you begin learning about a specific type of divination, an entire inter-related world opens up to you. The study of astrology and the practice of Tarot, for example, are channels that allow us to access and communicate with our higher selves and the powers that be. But did you know that there is a Tarot card corresponds with each zodiac sign? Read on to discover which major arcana card is synchronized with your sun sign. 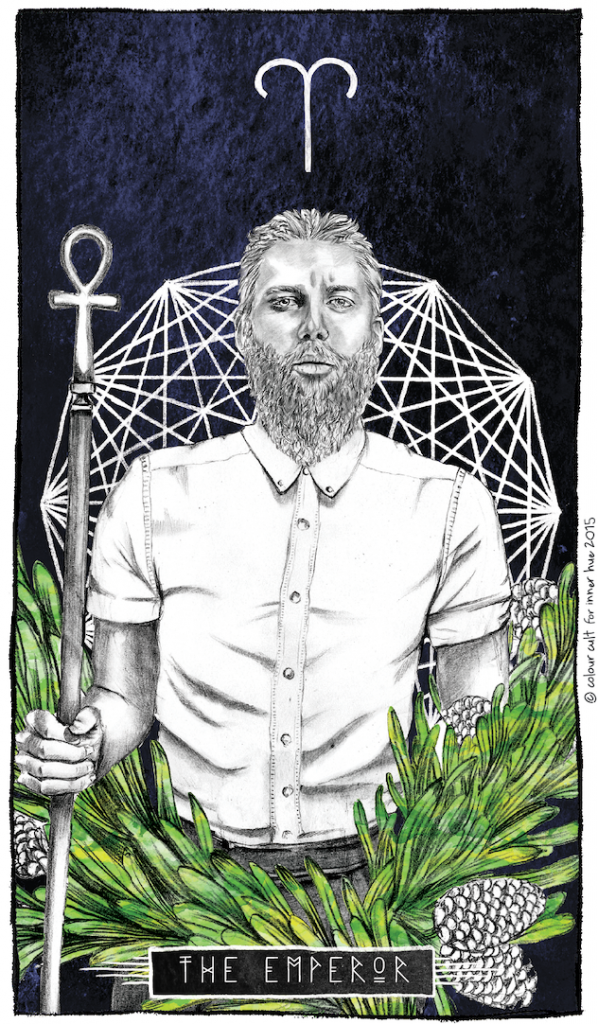 Sitting confidently on a throne we have The Emperor, a bold authoritative figure known for his ambition and ability to lead. Have you ever met an Aries that wasn’t first in line or overly eager to win any board game? Aries is ruled by Mars, a planet that defines our animalistic instincts and indicates how we spend our energy during our lifetime. Mars is also known as the red planet, another Aries nod in The Emperor’s (usually) red robe and vast mountain range traditionally depicted behind his throne. The Emperor and Aries are most comfortable in positions of power, and full of energetic drive that deems them capable to initiate projects and lead with a clear vision toward success. 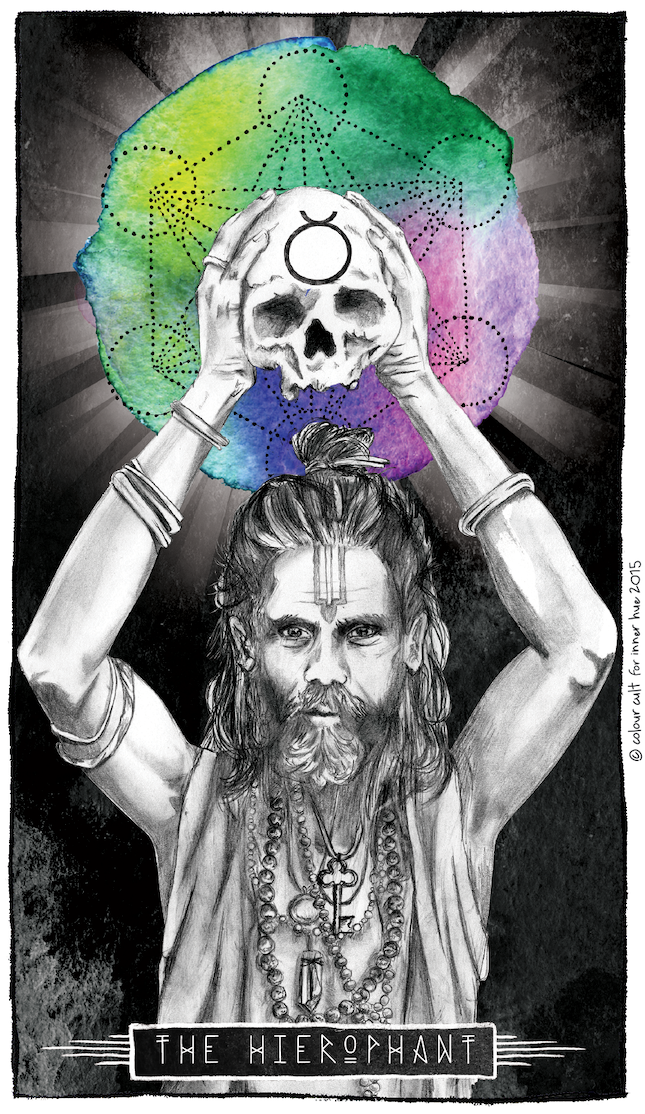 Change is good? Not for The Hierophant and Taurus—these two steadfast partners thrive off of stability and traditional values. In the Tarot, The Hierophant represents the ultimate practical approach to life. It’s a card that also offers deeply insightful advice, a source of higher wisdom. As a trusted source of information, The Hierophant is much like a reliable and grounded Taurus, who you may go to for sound advice when particularly unsettling challenges arise. This card also embodies a strong element of finding one’s own belief system. In astrology, Taurus rules the second house of self-worth and values, further blending the core ethos of the card and sign together.

Take a mini vision quest with this Tarot spread… 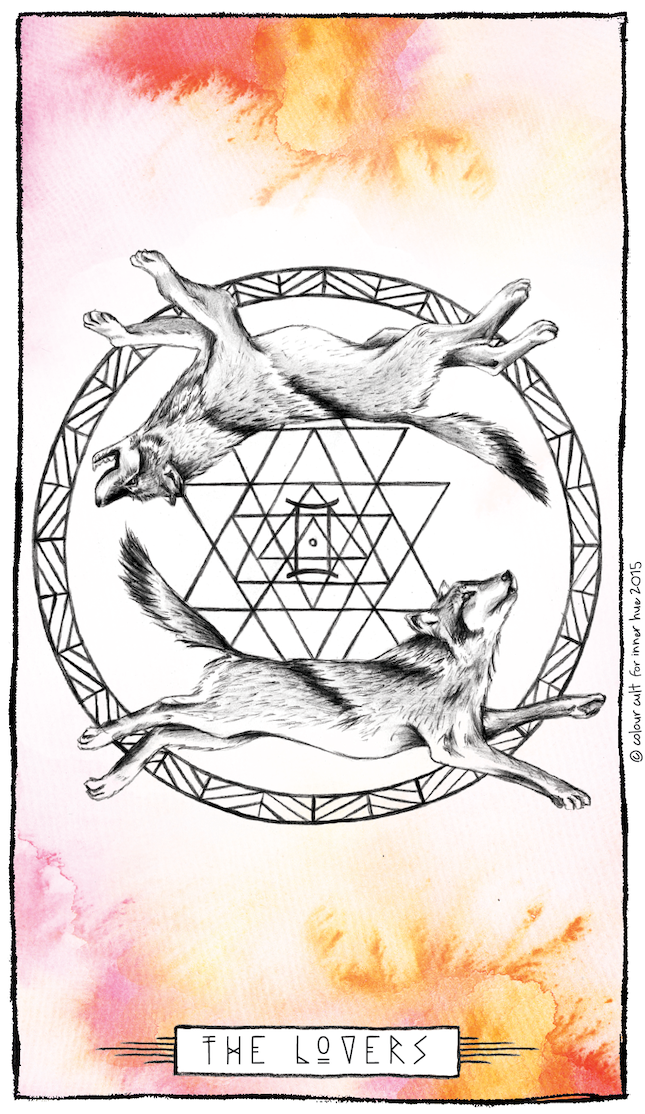 In the traditional Tarot deck, The Lovers card is illustrated with an all-knowing angel hovering over a man and a woman. Angels protect us, but they also deliver information. Gemini, an incredibly chatty sign ruled by Mercury, the planet of communication, thrives on knowledge and new information. While there is an inherently romantic element to The Lovers card, at its core, it really wants us to understand the power of choosing and making decisions. There’s duality in every situation—and if you’ve ever spent more than twenty minutes with a Gemini, you’ve likely witnessed one of their infamous flip-flopping episodes. It’s hard to make up your mind when you can see both sides so clearly. There is an element of harmony in The Lovers card, too, represented by the twin sign of Gemini. The Lovers and Gemini both ask us to communicate honestly and authentically, and to make choices in alignment with our highest selves. 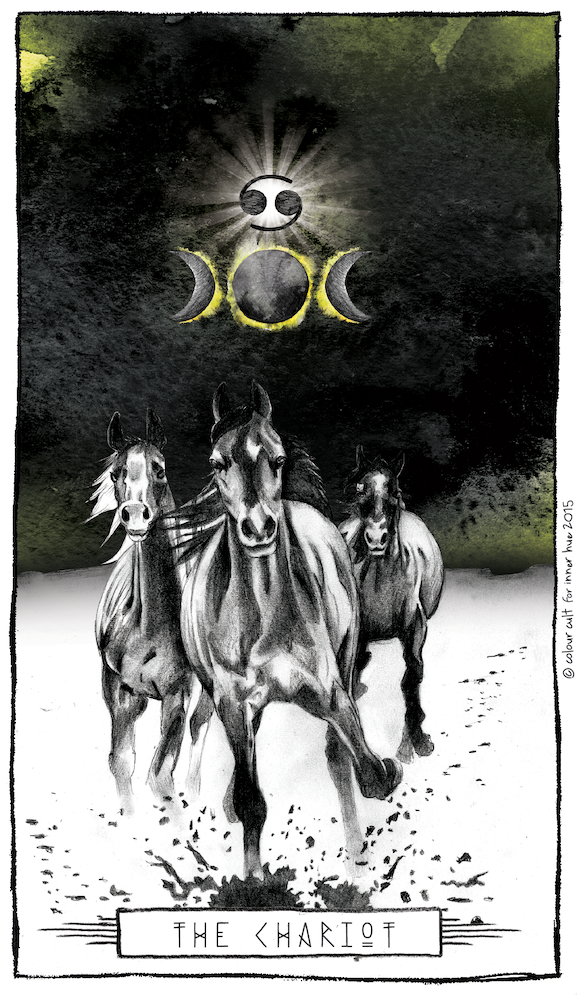 While the underlying message of this card is action-oriented, it’s about inspired and informed action. The charioteer in the card sits still, observing his surroundings before making his next move. Dressed in armor, the man embodies Cancer’s tough exterior and ability to access an intuitive depth. Cancer and The Chariot both share a stubbornness—in order to succeed, sheer willpower and intense focus are mandatory. The black and white traditionally utilized in the card can be interpreted as revealing two sides: black as the hard, outer exterior and white as the deep emotional sensitivity within. On the charioteer’s armor are two crescent moons—Cancer’s ruling planet. 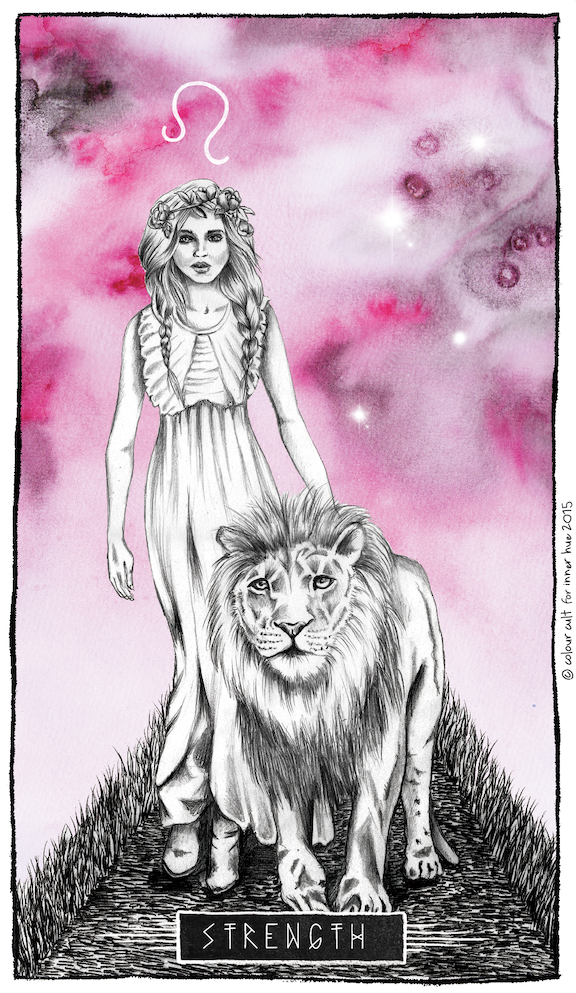 The Strength card isn’t about conquering through brute force—it’s about establishing a heart-based connection. And who better to rule and lead with their heart than Leo? The Strength card reminds us to lead with compassion—the woman depicted in the card confidently and boldly meets the beast with kindness. Her open-hearted embrace matches Leo’s bold character and generous spirit. There are elements of control and determination at play—the woman is eager and capable of handling the situation with confidence and will power. There is an intuitive feeling that success is coming, which ties in with Leo’s positive outlook on life, which persists in spite of any challenges they may be facing. 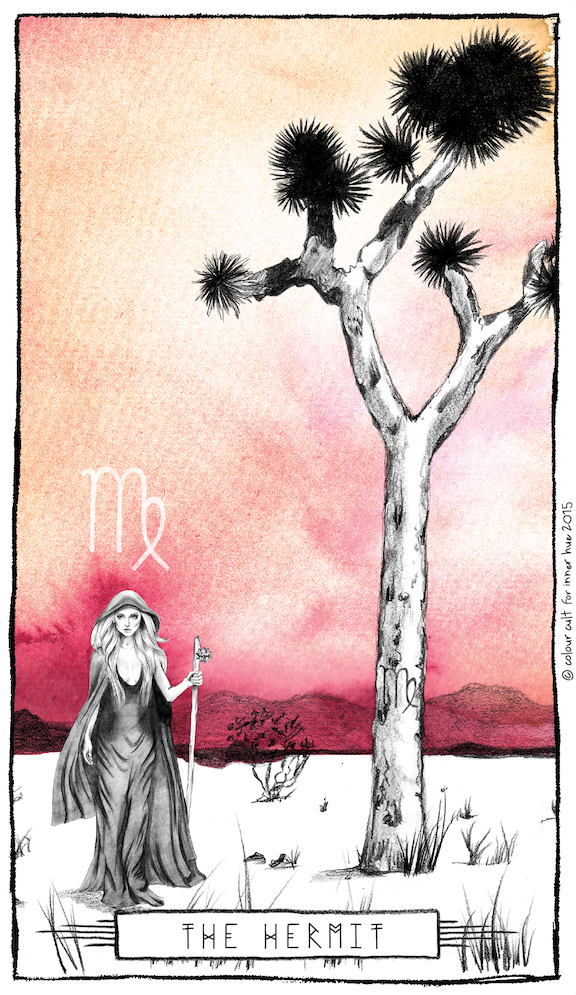 Which sign will you find sitting alone, reflecting on and replaying their thoughts and actions? The one and only overthinking Virgo. Resting atop a mountain, rid of any distractions, The Hermit seeks a higher purpose. Solitude as a means of achieving success is likely relatable to any driven Virgo. Once alone, The Hermit enters a deep period of self-reflection. Virgos are known for their hyper-critical eye, eternally striving for perfection. While being critical typically has a negative connotation, it’s through deep and thoughtful reflection and attention to details that we are truly able to assess our past and make informed decisions about our future. While The Hermit offers respite and a spiritual reflection, the revision, and evolution necessary to embark on the next stages of his life ring true with Virgo nature. 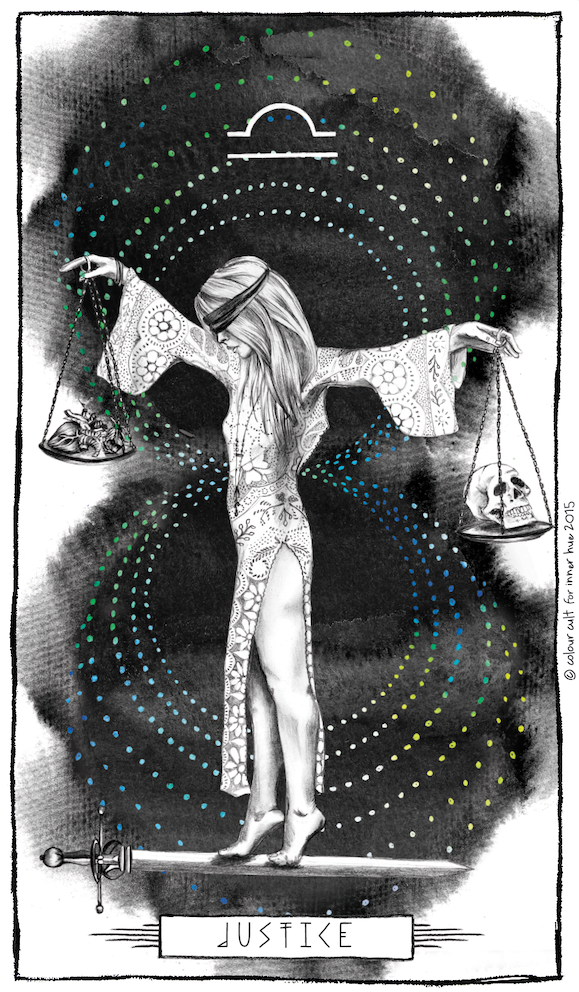 The scales. Need I say more? The figure in the card holds scales and a sword as she sits between two balanced (and Libra-approved, aesthetically pleasing) pillars. The sword suit in the Tarot represents air signs—like our dear Libra—and the use of logic. The scales express a desire to use both logic and intuition hand-in-hand. Libras are truth-seekers—they see both sides of situations and love to play devil’s advocate. There is an order and a balance to everything. The Justice card reminds us that we will be treated fairly and held accountable for our actions. It asks us to reflect before making our choices, as every choice has long-term effects and consequences. Libras, too, are known for endlessly weighing the pros and cons of any situation. The Justice card reminds us that reflection before action is the natural order.

Want to know what’s in the cards for your love life? 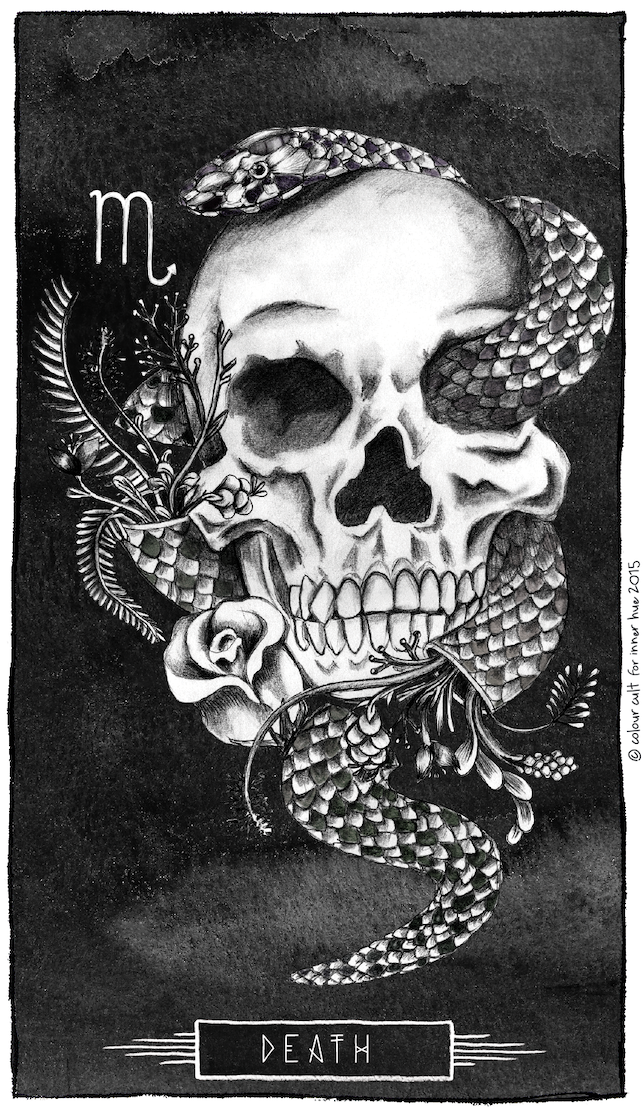 I know what you’re thinking: Fitting, right? (To all my Scorps out there, I’m definitely kidding.) In the Tarot, Death is easily one of the most misunderstood and feared cards. At its core, it’s all about transformation and change, and can actually be one of the most positive cards in a reading. In the zodiac, Scorpio is often noted for its ability to dive deep to explore uncomfortable emotional depths, then rise above and regenerate. That is what the Death card asks us to do. There is beauty in the transformation, and even in pain. Scorpio is a sign that is rarely scared off or intimated—it’s not afraid to feel and work through pain. It also rules the eighth house of the zodiac, which is responsible for death, intimacy, and rebirth. A new beginning often awaits when you receive the Death card in a reading. 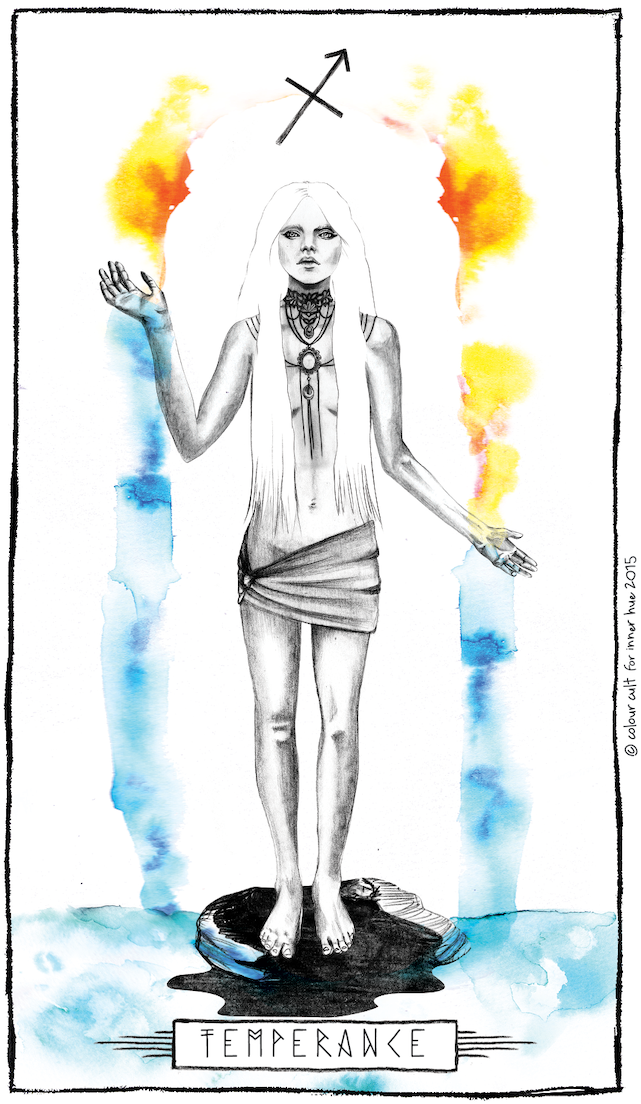 If there’s any sign that is consistently seeking the depths of our purpose on earth, it’s Sagittarius. These fiery, beloved centaurs approach life and its challenges with a positive disposition and are eager to soak up knowledge at every twist and turn. Temperance asks us to remain calm. You may be feeling unstable or overwhelmed. Temperance asks you to adopt a Sagittarius’ mindset: Through a half-glass-full type of mentality, you will be able to persevere and overcome. Sagittarius and Temperance ask us to look at the larger picture in life and acknowledge the divine intervention that’s actually happening right now during the stressful times. In the traditional deck, there is a pathway that leads to a mountain range, representing life’s long and winding journey—another nod to Sagittarius, the zodiac sign that can’t travel enough. 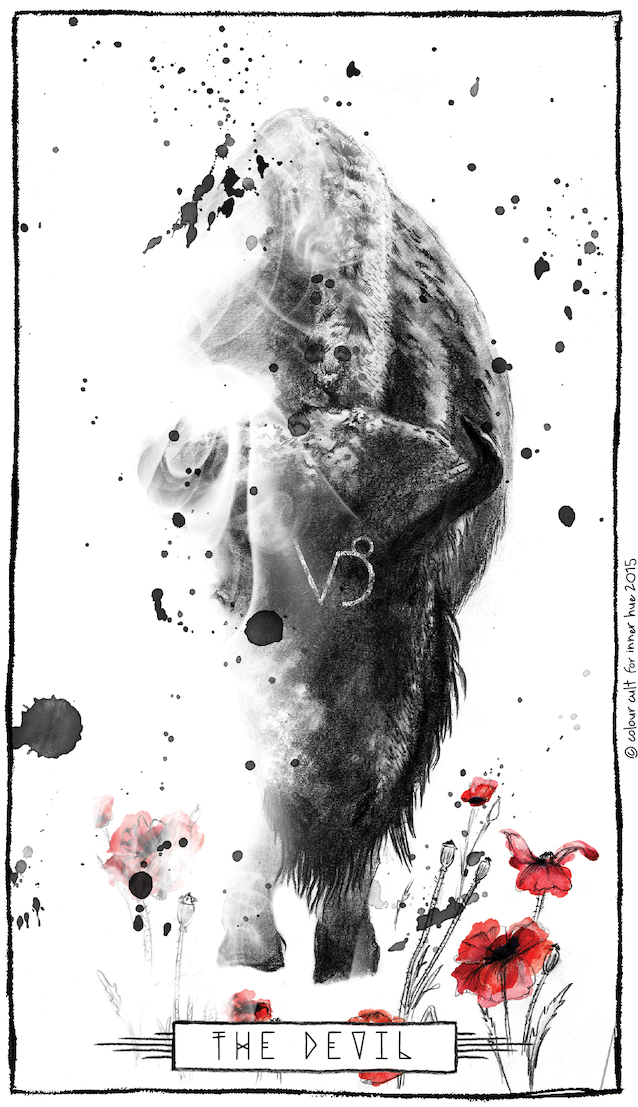 Could this be a shout out to anyone who’s ever dated a Capricorn? Again, kidding. Pictured in the traditional deck is Pan, a half-man, half-goat, similar to our beloved sea goat (Capricorn’s astrological symbol). An underlying theme with The Devil card is temptation, and while Capricorns aren’t easily derailed from their plans, they do grapple with the constant temptation to gain more. Rarely satisfied with what they have, they’re likely to do whatever is necessary to climb to the top. Capricorn is also ruled by restrictive Saturn, and in The Devil card, we have two humans who appear to be chained. In reality, the shackles are loose, and they have the option to leave. Akin to Capricorns’ incredibly high expectations of themselves, they, too, can let loose—it’s up to them to release themselves from self-imposed restriction. 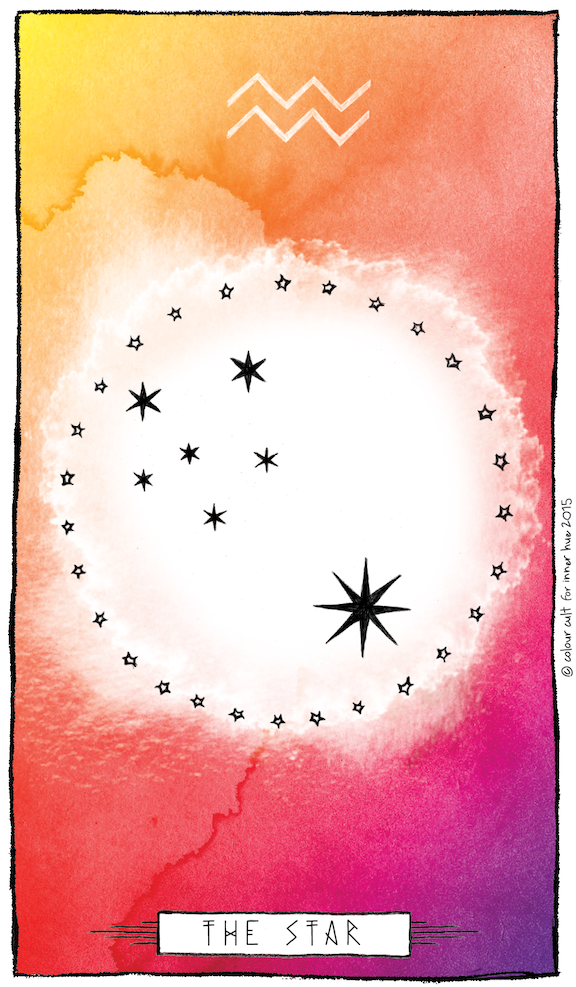 There is obvious and inherent symbolism when it comes to Aquarius and The Star in the tarot. Aquarius is often represented by the water bearer, which we have pictured front and center in The Star’s classic depiction. Aquarius is an air sign, and where do we find stars? In the sky! Aquarius is the zodiac’s humanitarian, often taking on the world’s problems—ever so eager and hopeful to make a difference. In the tarot, we have the woman pouring water back into the earth, nourishing the land in hopes of creating a promising future. The Star reminds us of the beauty in the renewal of self and fresh beginnings. Aquarius is a sign that screams individuality in every which way—reminding us to love and respect our sense of self. 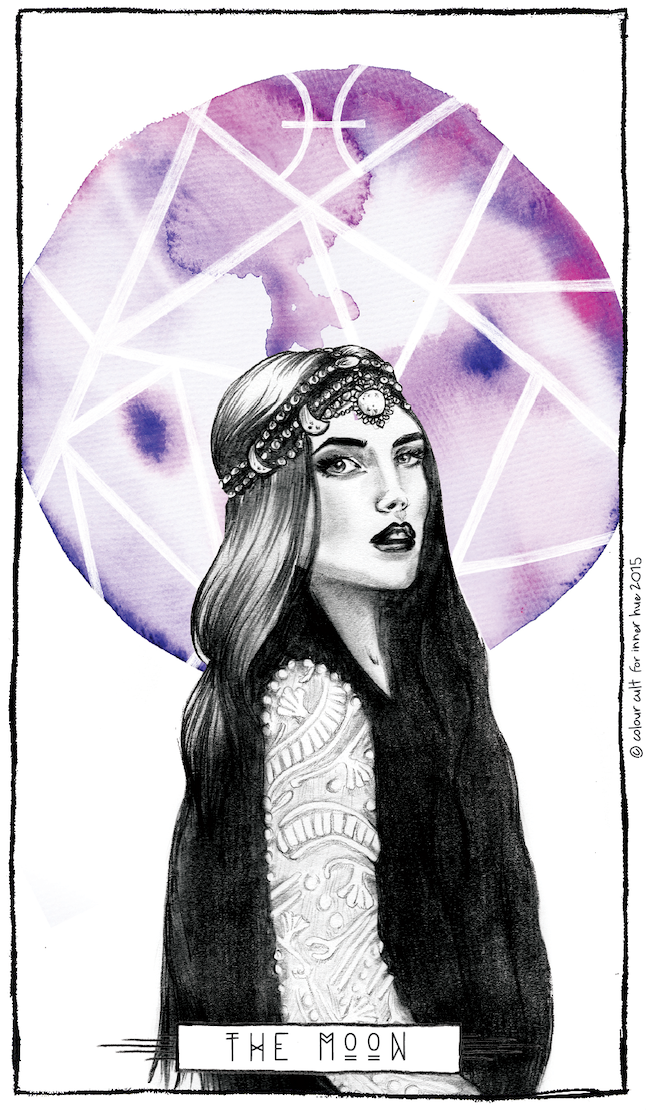 How many times have you been in a conversation with a Pisces only to realize they’ve stopped listening, disassociated, and left this dimension? Pisces is one of the most sensitive and psychic signs in the zodiac, which explains why their subconscious constantly distracts them. The Moon card in the Tarot reveals our subconscious thoughts, desires, and needs under the moonlight. Only in the darkness are we able to dive deeper and see our shadow self. There is also an element of illusion and delusion at work when The Moon appears in a Tarot reading. Pisces is ruled by Neptune, the planet of idealism, escapism, and delusion, and can often get swept away in their daydreams and fantasies.

Art by The Alchemy of Design // Cards from Lumina Tarot