2021 Mercury Retrogrades Are Pivotal for Adapting to Our New Reality 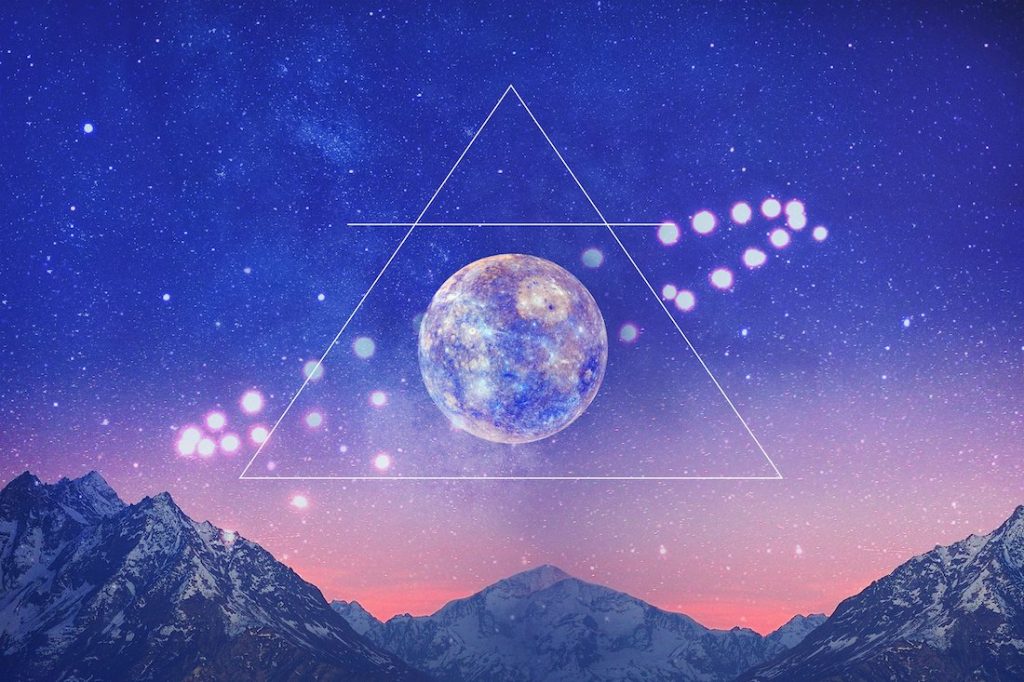 Mercury retrograde has a bad reputation in popular culture for causing disruption. Yet the unusual paths we take and the unexpected twists in storylines we experience during Mercury retrograde are important to pay attention to, as they bring awareness to necessary lessons.

Mercury retrograde periods are known for bringing liminal experiences of leaving one state to enter another, and this will especially be the case in 2021. The passages of Mercury retrograde in 2021 will be instrumental in helping us adjust to the immense change and volatility in societal systems that will come from Saturn and Jupiter beginning a new cycle together while Saturn additionally forms three shattering square aspects with Uranus.

Although Mercury retrograde has been demonized by many, it is in fact a natural phase of dissolution, purification, and regeneration that is essential to the function of Mercury. Part of Mercury’s role is to destabilize dynamics in order to loosen control and bring about a turning point in narrative and meaning. While retrograde, Mercury transitions from being visible into an invisible phase during which it comes closest to earth in orbit, intensifying its impact on our lives.

Learn all about how planets behave when retrograde

The slowly churning, backward motion of Mercury retrograde calls for introspection, following inner guidance, and shedding whatever needs to be released. It’s a passage of decay through which we can emerge on the other side with a revivified presence full of fresh ideas. This will be needed medicine during the fundamental restructuring of societal systems that will take place in 2021.
Mercury usually goes through three retrograde phases each year in the same element, and during 2021, Mercury will be retrograde in the air signs of Aquarius, Gemini, and Libra.

How Does Mercury Retrograde Behave in Air Signs?

Mercury has an affinity with the element of air, as it shares qualities with this element such as mobility, flexibility, and versatility. Mercury retrograde in air signs during 2021 will necessitate renovating our use of technology and reformulating the way we gather ideas and communicate information so that we stay current with the major changes across global society.

Since the air element accelerates movement, there will be rapidly developing trends and collective movements we will need to adjust to and understand. We will also need to become more effective in applying critical thinking skills toward the information we receive from external sources, and so we can utilize the periods of Mercury retrograde for realizing what needs to change in our thinking and problem-solving.

Mercury being retrograde in each of the air signs is especially significant due to 2021 being the beginning of a new era of Jupiter and Saturn uniting in only air signs that will last until 2159. As part of the transition, we will experience three exact square aspects between Saturn in Aquarius with Uranus in Taurus that will correspond with upheaval in societal structures as we adapt to an old era passing away.

Things will not be returning to the way they were before 2020, and so we will need to develop stabilizing forms while the world around us goes through radical change. The first two exact square aspects between Saturn and Uranus on February 17 and June 14 will occur while Mercury is retrograde in Aquarius and Gemini, and so our experience of Mercury retrograde in 2021 will be pivotal in how we reorient our perception and mindset to align with the fundamental reshaping of global systems that will be taking place in correspondence.

Most intense for air signs: Gemini, Libra, and Aquarius

With Mercury retrograde in the same element as your sign, the periods of Mercury retrograde will bring opportunities for making major innovations in your creative expression and finding new outlets for your skills. It will also become obvious what isn’t working and what aspects of your communicating and relating skills need to be altered to make a more effective impact. You may become intensely drawn toward a philosophical or spiritual system that deepens your understanding or a new creative direction that radically reshapes your life.

Most challenging for earth signs: Taurus, Virgo, and Capricorn

There is a lack of common ground between air and earth signs. Earth signs are prone to routines that bring stability and grounding, while air signs are much more about movement and changing perspectives. The three Mercury retrograde periods will bring critical information regarding major changes you need to make with your work, schedules, and finances that will require openness to being more flexible and versatile. You won’t be able to stay in your comfort zone of the way things have been in the past.

Fire signs share an active quality with the element of air that is comfortable with an acceleration of events, which will be helpful in moving with the sweeping changes across society. You will need to be open to changing your mind and listening to new perspectives with Mercury retrograde in air signs. It will be important to seek out different information sources and people who think differently from you so you can gather a wider perspective on events in your decision making. Being open to new viewpoints will also lead to important developments in your relationships and expanding your community.

While water and air signs are similar in being open to new ideas and influences, the tendency of water signs for being receptive and slowing things down will need to be adapted to the more active and accelerated quality of the air element. You will need to find outlets for processing your feelings and making space to explore how your inner world is being impacted by the great changes happening in external events. Yet you will also need to take a more active role in decision making so that you are not being too passive amidst the larger shifts in society taking place.

January 23: Mercury at maximum elongation (begins to slow down)

February 8: Mercury conjunct the sun at 20°01’ Aquarius (closest to Earth)

March 6: Mercury at maximum elongation (begins to speed up)

May 17: Mercury at maximum elongation (begins to slow down)

July 5: Mercury at maximum elongation (begins to speed up)

September 13: Mercury at maximum elongation (begins to slow down)

October 9: Mercury conjunct the sun at 16º35′ Libra (closest to Earth)

October 25: Mercury at maximum elongation (begins to speed up)