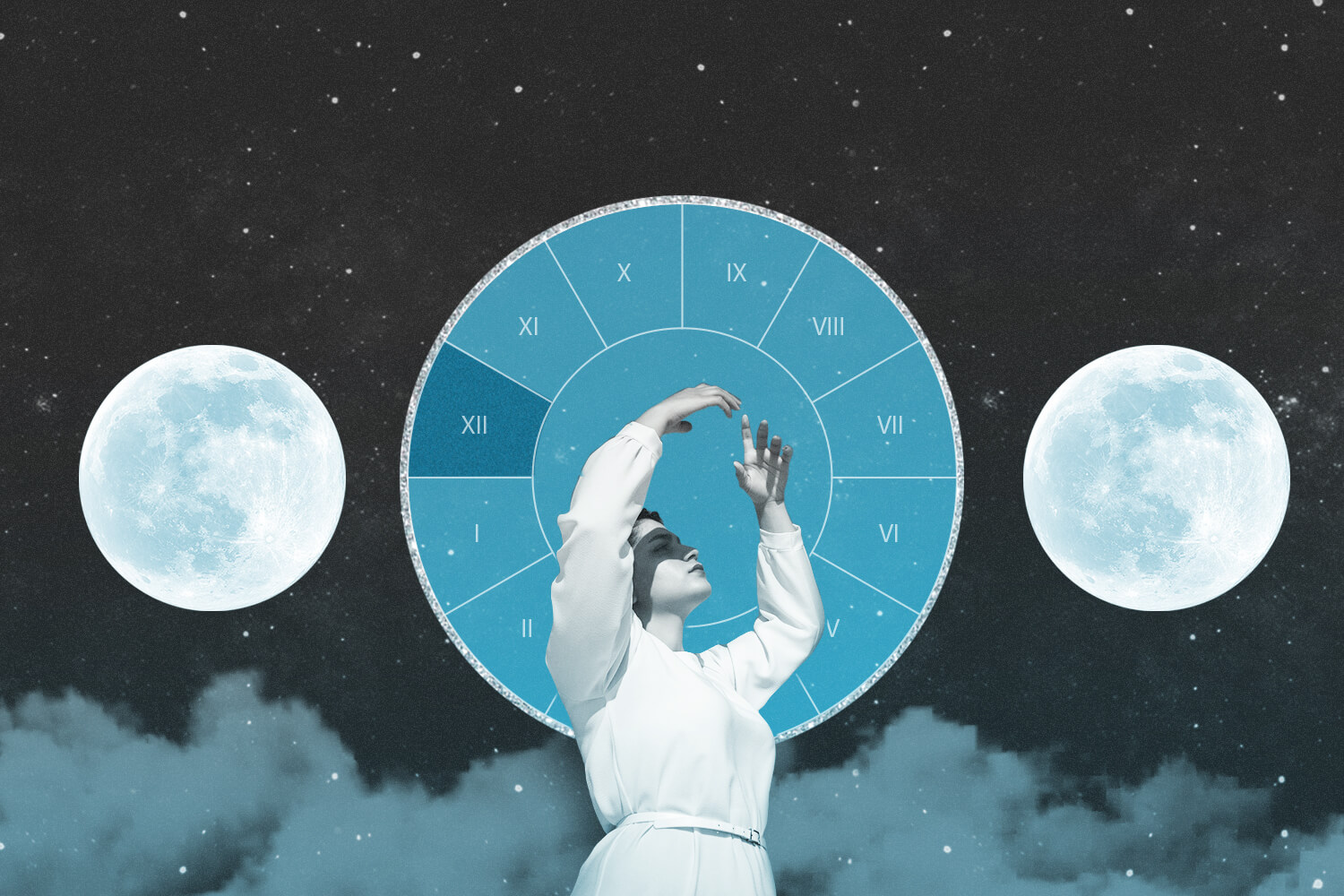 Here’s what it means when the moon lands in the Twelfth House in transit, during a full moon, in a composite chart, in your birth chart, and more.

When the moon is in the 12th House, our emotional needs may be hidden or a little hazy. We chatted with astrologer Julia Michas to identify what it means when the moon travels through, or occupies, a birth chart in this healing and mysterious House.

What Does the Moon Represent?

The moon is a very sensitive part of the chart. It describes how we feel emotionally safe and secure. It might also describe how we express our feelings to achieve those things.

In a birth chart, it represents the deepest part of ourselves. “It’s one of three points—the sun, moon, and rising—which are the trifecta of your personality,” says Michas.

She explains that the sun and moon respond in conjunction with one another and that the moon is the underlying part of what the sun illuminates. “Therefore, the moon represents everything which supports your existence: your home, your family, and what you eat.”

Additionally, the moon represents our subconscious—the deeper part of us that is associated with intuition and psychic development.

According to Michas, the 12th House represents the most hidden part of our chart—concealed from the world and, often, ourselves as well. “Planets in the 12th were often denied to us as children,” Michas says. “As we get older, we end up denying them to ourselves. For that reason, we are often out-of-touch with our 12th House planets.”

She denotes the 12th House as “the House of undoing,” because its potential can either help you grow or cause your downfall. The idea, however, is to see this House as points of reference for growth. Whatever planets land there signify some part of you that requires a little self-recognition and TLC.

Michas provides a few keywords to describe the moon’s energy in the 12th House:

She notes that since the moon indicates our emotions and emotional needs, to see it in the “hidden” 12th House may represent a lack of emotional awareness or clarity.

In the birth chart, if the moon is in the hidden 12th House, it can resemble how we disregard our own needs. “Your emotions and need for nurturance and safety may have been overlooked, or maybe even discouraged when you were young,” Michas explains. “As you get older, you may end up denying your own emotional needs, or maybe it’s hard to reach out and ask for help.”

This person may also need to disconnect from the world in order to understand how they feel. Since the 12th House is one of isolation, we are often able to tap into or understand our placements better when alone.

In synastry (cosmic relationship based on two birth charts—known as a composite chart), to see the moon located in the 12th House calls on 12th House themes as staples in the relationship: service work, spirituality, and charity. As an example, Michas says, “Maybe you two share a spiritual path or maybe you met doing volunteer work at an animal rescue.”

She also notes that there may be themes of self-sabotage in the relationship.

The transiting moon through the 12th House lasts about 2.5 days and happens once a month. During this time, Michas says it’s best to utilize the moment as a period of retreat. “We often become more internalized, which is good for meditation and spiritual work,” she says. “It can also be a transit when you are out of touch with your feelings, and maybe less willing to be open with them.”

A solar return indicates major themes that will take place in the upcoming year after your birthday. With the moon occupying this House, Michas mentions that it’s the best time to go on a yoga retreat, dive into service work, or commit yourself to doing something charitable.

Full moons bring cultivating or culminating moments for us, and often affect our relationships. “With a full moon or solar eclipse in the 12th House, it can mean that a cycle is ending in your relationship,” says Michas. “Maybe a secret was revealed that changes a relationship or maybe there are changes to how you serve others.”

Michas gives us a few keywords for each zodiac sign in the 12th House:

What House is the moon in?

To find out where the moon is in the sky right now, you may want to get an app to track the movement of the planets. With Astrology+, you’ll receive access to all this information, plus monthly readings.

To find out where your moon sign falls, check out our free birth chart calculator.