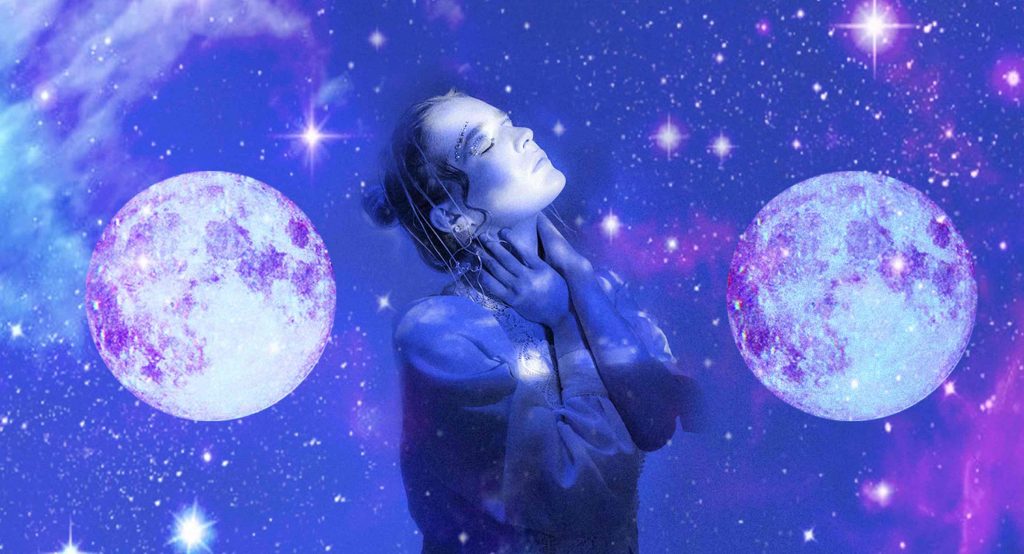 In astrology, the moon is connected to ancient wisdom, divination, and feminine power. For that reason, your strongest psychic ability can be linked to the zodiac sign energy of your moon sign.

When considering the natural relationship between the sun and moon, we all know that the sun bestows light, illuminating our world for all to see. On the other end of the spectrum, the moon receives the light of the sun, shining brightly so that here on earth we can marvel at her luminous glow. When thinking about your own psychic abilities, and how you receive information (or illumination), it only makes sense to consider which sign the moon was in during the time of your birth.

The moon moves into a new sign every two and a half days, meaning that, even if you and your friend have the sun in Libra, that doesn’t mean you will function the same intuitively. This is mainly because you most likely have a different moon sign. For example, those born with the moon in Leo will perceive physic information differently than a Capricorn moon might.

While Aries moons are often accused of being impulsive, what they’re often not credited for is their natural intuition, which tells them to quickly change course. There’s a primal instinct that goes along with Aries energy, making them naturally claircognizant.

Claircognizance is the ability to predict the future or receive psychic information, without knowing exactly how the message was delivered. It can come through as a gut feeling, and often brings through a sudden epiphany of sorts. Confidence and the ability to trust that your guides will lead you down the right path are key when it comes to developing this ability. Asking for guidance from the universe and looking for signs is also a great way to play with this psychic skill.

As an earth sign, Taurus moons love to indulge in the material realms, with a distinct ability to appreciate that which is tangible. With such a sensitive connection to physical matter, the gift of psychometry often goes hand and hand with this lunar placement.

Psychometry is the ability to pick up psychic information through items, simply by holding them and being open to the vibration and story they carry. Mediums often use this gift by clutching objects that once belonged to someone who has passed on, which allows them to tap into their energy. Meditating with crystals or artifacts from loved ones that have crossed over is a great way to strengthen this talent.

As the sign of communication and intellect, Gemini moons are great speakers and listeners, making them particularly skilled at clairaudience. Clairaudience is the ability to “hear” messages from the other side, almost as if you’re being spoken to from beyond the veil.

This gift can feel cerebral or overwhelming at times, especially if your mind is super active. Ringing or popping ears are often linked to this ability, especially if a message is trying to come through. If you think the other side may be trying to tell you something, the best thing to do is to center yourself and ask what the message is.

Water signs are the most psychic members of the zodiac, with a natural ability to pick up on the energy that surrounds them. Cancer natives have extraordinary psychic ability, since this sign is ruled by the moon. For Cancer moons, this usually results in a pronounced empathic ability, as they tap into the emotions of others—whether they’re prepared for the information or not.

Since this lunar placement is such a sensitive one, it’ll be important to adopt a psychic defense and protection technique, to avoid unwelcome emotional shifts. If you do feel your mood change suddenly throughout the day, be sure to check in with yourself to see if anything is bothering you. If your mind tells you the emotions you’re feeling don’t logically belong to you, you can simply call in your protection or recite a mantra like “return to sender.”

Leos are one of the most creative and outspoken members of the zodiac, which makes those with this lunar placement excellent creative channelers! Creative channeling is the ability to pull through artistic information from the other side, allowing entities from beyond the veil to help you with your latest passion project.

When this ability is active, one usually feels as though they are in a “zone” or creative trance while they go about their work. With this moon placement, try lighting some orange candles before your next painting, writing, or dancing session. Also, consider doing a meditation while inviting in positive energy from the other side to assist you with your masterpiece! The finished product could give you information about who your spirit guides are, especially if you ask them to show themselves through your art.

No other sign embodies health and wellness quite like Virgo does, which means people with this lunar placement are often physical empaths. This ability could cause you to feel the symptoms of your friend’s illness, sympathy pains for someone in labor, or even inconsistent energy levels.

With some training and a dedicated meditation practice, this ability could be strengthened to bring through a well-rounded “medical intuitive.” The range of practice varies with medical intuitives, but many find that they can detect vitamin deficiency, physical discomfort, and even insomnia within their clients. Of course, at the end of the day, you’ll need to make sure anyone you consult follows up with a trip to see their personal physician.

Are you curious about how psychic energy works? Get guidance from a live psychic reading!

As an air sign, Libras make excellent listeners and conversationalists. This sign is also very relationship motivated, creating meaningful and oftentimes psychic bonds with the people they care about. The combination of these two qualities often brings a telepathic element to those with a Libra moon sign!

You’ll notice this ability is more active when you’re able to guess what other people are thinking, know who’s calling before seeing the caller ID, or have a song stuck in your head all day only to find your partner singing it in the kitchen later (without having mentioned it). While this ability can add beauty and magic to your relationships, you’ll want to find a psychic defense technique that works for you, so you can give your psyche some peace and quiet every now and then!

No other member of the zodiac shares a connection to death and rebirth quite like Scorpios do. An inherent ability to connect with the other side is pronounced whenever this energy is present, which is exactly why the veil is thinnest during the Scorpion’s season.

If your moon is placed under this sign, you’re likely a natural medium, with the ability to communicate with souls that have crossed over. The best way to hone in on these skills is through mediation, being open to your gifts, and honoring your ancestors with candles, prayer, or even a designated altar. So, next time you feel a ghostly presence in the room, try talking to it!

Sagittarius folks are one of the most creative and visionary signs in the bunch, with a thirst for adventure and a keen imagination. This talented sign often visualizes situations, art, and fantasy within their mind’s eye, making them naturally clairvoyant. Clairvoyance can range from vivid dreams to seeing auras, orbs, and even ghosts.

There’s also the potential to have prophetic visions, especially during a meditation session, making it important that people with a Sagittarius moon meditate often. To strengthen this ability, try closing your eyes and visualizing the room that you’re in with as much detail as possible. This practice will gear up your third eye to see things from beyond the veil. When you feel you’re ready, ask the other side to send you orbs or to help you see the auras of others.

Capricorn moons value their emotional and psychic boundaries, but that doesn’t mean they’re unable to receive information or guidance from the other side. People with strong Capricorn placements are excellent at picking up on detail and noticing patterns, so it only makes sense that the universe would use synchronicity in the material realms to communicate with this lunar placement.

To tap into the psychic ability of this moon sign you’ll want to be observant of any recurring symbols that find their way into your life. If you’re confronted by the same song several times in one day, pay attention to the lyrics and how they pertain to your life. If you notice the number 11 over and over again, you may want to do some research on numerology. These synchronicities might feel like a coincidence at first, but once you begin to track them more closely and decode their meaning, you’ll see that it’s much more.

Aquarius energy can be wildly unpredictable and is often compared to the brilliance and force that is embodied by a flash of lightning. Aquarius moon folks often similarly receive psychic information, seeing visions of the future or gaining information in quick bursts.

These sparks of divine knowledge are often referred to as “downloads,” and it usually feels like an eureka moment or sudden enlightenment has occurred. The problem with taking in information so quickly, is that it often leaves one’s mind just as fast. The best way to work with this ability is to keep a pen and notebook around, so you can take notes when these messages strike.

Since Pisces energy is ruled by Neptune, the dreamiest planet in the bunch, it should come as no surprise that those with their moon in this sign are prone to vivid and prophetic dreams. The psychic ability of this moon sign often goes hand in hand with deja vu and the power of astral projection, which makes keeping a dream journal and a consistent meditation practice important for those looking to strengthen these skills.

Setting dream intentions can also help bring guidance from the other side, which you can do by simply asking your guides to send you messages while you’re tucked in at night—just make sure you attempt to remember your dreams the minute you wake up.