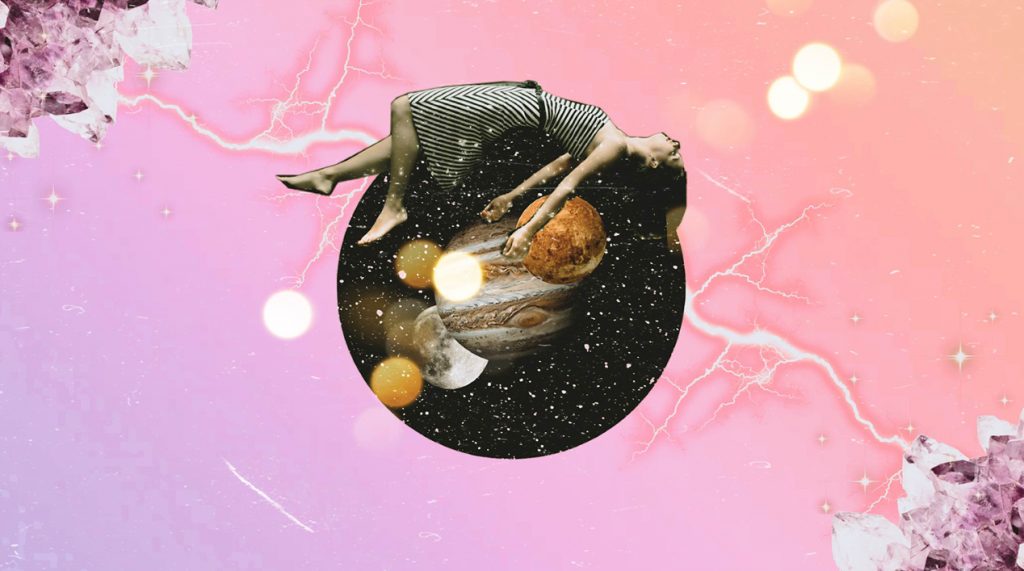 Throughout history, humans have looked up at the celestial bodies in the sky with wonder. We have always held reverence for the cosmos and tracked its movements. The synergy between humans and the planets is inextricable and deeply embedded in our DNA.

Becoming a student of astrology expands our awareness of how the planets noticeably influence the dynamics here on earth. When you observe them long enough, you begin to notice patterns in how the archetypal energy of the planets expresses itself. It’s almost as if the planets have a mind of their own!

What if we could turn our passive observation into more of an active co-creation with the planets? Well, you can by invoking them as deities through a systemic application of symbols, correspondences, and ritual offerings. This is the essence of planetary magick!

What is Planetary Magick?

Like astrology, the origins of planetary magick are unfathomably ancient. These beliefs are based on Hermetic philosophy, which comes from the teachings of Hermes Trismegistus and the crux of most Western esoteric and occult traditions. Hermes is associated with the Greek messenger god Mercury and the Egyptian deity Thoth, who is credited for bestowing magic, writing, technology, language, and astrology to the human species. And according to Egyptian mythology, Thoth was born at the beginning of time.

The philosophy of planetary magick asks us to develop close personal relationships with the planets as if they were alive around and within us. Gabriela Herstik, author of “Inner Witch” and “Bewitching the Elements” states that “Planetary magick is rooted in the belief that the planets—specifically the seven classical planets (sun, moon, Mercury, Venus, Mars, and Saturn)—are living intelligence that we can connect to and embody through spell and ritual work. She adds, “Planetary magick is the practice of working alongside the planetary energies and their frequencies through ritual, remediation, myth, invocation, talismans, correspondences, hymns, and connection.”

When we develop conscious relationships with the planets, we can begin to co-create our reality with the help of their influence. The purpose of developing a relationship with them is to gain their favor to enact your Will to your external reality. Think of the planets not only as hunks of rock or gas in the sky, but a vibrational field or multidimensional state of consciousness you can work with to achieve a desired outcome.

Read me: This Is Your Most Powerful Psychic Ability According to Your Moon Sign

To begin working with the celestial bodies in a conscious manner, attuning to their energy on their corresponding days and hours is the best place to start.

Over 5,000 years ago, Ancient Babylonians established a seven-day week, with each day dedicated to one of the seven classical planets. Each week starts with the sun (Sunday), followed by the moon (Monday), then Mars (Tuesday), Mercury (Wednesday), Jupiter (Thursday), Friday (Venus), and Saturday (Saturn).

This system was eventually adopted by cultures around the world, including early Hellenistic astrologers, who were greatly influenced by this planetary-based organization of time. Each culture named the days of the week according to their own equivalent of the original seven planetary deities.

Planetary hours are another aspect of this ancient system, which places a specific rulership over a certain hour of the day under each of the planets—starting with the slowest (Saturn, Jupiter, Mars, and the sun) to the fastest moving planets (Venus, Mercury, and the moon). This is known as the “Chaldean Order.” Each day begins with the planetary hour according to the planetary ruler of the day.

Using the methodology of planetary hours and days of the week gives us much more direct access to the planet at those times. We’re in closer communion with them, when we adhere to this system. Would you like Mercury to hear your prayers for a presentation to go well? Or maybe the ear of Venus to bring you a lover? Pay close attention to their assigned hours and days they rule, meditate on their energy during that time, and you’ll have their attention. To find out the planetary hour at any given time, a simple web search or Planetary Hour app download can calculate it for you in an instant.

To win the favor of a certain planet for them to influence your desired intention or outcome, you must make plenty of offerings! Each planetary intelligence resonates with certain colors, scents, metals, herbs, oils, Tarot cards, zodiac signs, and more. There are countless resources online and occult bookstores that have lists of these correspondences. Keeping a dedicated journal to the celestial deity you’re working with is a great way to track progress for your intention.

Depending on what you desire to call in, begin collecting the preferred items synonymous with the planet that can best help with your outcome. However, you don’t want to go asking for your worldly desires right away. All relationship building requires trust and mutual respect. “Once you have a basic understanding of the planets and have worked with their energy in meditation, you can invoke them and work with them in spell work, or in ritual.” says Gabriela Herstik. Think of it like courting—you wouldn’t ask someone to marry you on the first date! It’s a gradual process that unfolds over time.

If your intention is to increase your vitality, have better health, or more confidence, you would work with the sun. So, on the sun’s hour and day, you might situate yourself at an altar that contains symbols and objects that align with the sun. You might light some amber incense, arrange gold pieces and sunflowers around a yellow candle. You could offer orange juice or calendula tea and meditate on the sun’s light and thank the sun for rising and setting at the same time each day. Do a sun salutation and watch as many sunrises and sunsets as you can.

If your intention is to magnetize love and attract better suitors, Venus is the one to call in. Because Venus is associated with attraction, beauty, and relationships in astrology, creating a resonance with her through rituals and offerings can have a profound effect on this area of our life. The more attention we can give her, the more her energy can be imbued within us. To work with Venus, meditate with her on Fridays during her hour. Draw her near with some rose incense and red berries. Wear red lingerie and lipstick to invite her into your space and focus your energy on honoring the presence of beauty, love, and sensual pleasure in your life. You could pray, recite self-love affirmations, or write poems dedicated to her, using the power of your voice—one of the most powerful magical tools you have.

Read me: Manifesting 101: Your Complete Guide to Waking up to Your Truth and Getting What You Want

If you’re new to the idea of Planetary Magick, knowing how the planets express themselves through you is a great place to start. Developing a relationship with the planets should be intentional and in full alignment with your purpose in this lifetime. Luckily, understanding yourself through the lens of your astrological birth chart can be a good starting guide on which planet to work with. “Use your birth chart to learn about your personal relationship with the planets. What sign they’re in and what house will help you understand how they show up to you,” recommends Herstik.

Knowing the strengths and weaknesses of your placements can inform your decision. For example, if you have a debilitated Mars, you might want to work with its energy to increase its presence in your life. On the flip side, you might feel called to amplify a strong placement in your chart by working with the planet that seems to have the most power. The reasoning for choosing which planet to work with is an intuitive decision and ultimately up to you, what you want to create, what you want to change, and what you want more of in this life.

Once you have developed a relationship with the planets, a deeper relationship with yourself begins to emerge. The path to gnosis can be profound through the lens of planetary magick. It can be a powerful way to stir up ancient remembrance within and align with our multidimensional selves. Life becomes synchronistic in a way that makes it almost certain the planets had a hand in it. You’ll start to notice that the gods have a hefty sense of humor, and they are here to teach us wisdom and knowledge that contributes to our growth and evolution. You’re never alone with the celestial bodies and the possibilities are truly endless.

Just be careful what you ask for—because you just might get it.