Practicing Witches Share Four Magic Movies That Get It Right

Between Chilling Adventures of Sabrina, a Charmed reboot (just renewed for a second season), and even more of the Fantastic Beasts franchise, it seems like every show or movie is getting a magical touch. Yet with the onslaught of this witchy content comes the difficulty of separating real practices from what Hollywood thinks magic is. To help, we summoned some witches to offer their thoughts on the craft in the media—and share which movies get their magical depictions right.

“For as long as the witch has existed, she has been stigmatized,” says Gabriela Herstik, author of Inner Witch, A Modern Guide To The Ancient Craft. “What bothers me isn’t that we represent witches [in media], it’s when I see the witch vilified and made to look evil, or like a woman who has power and doesn’t know what to do with it and goes evil because of it. I think the witch is one of the most powerful archetypes we have, one that more of us are finding inspiration in. If we’re going to portray her, we should do it well, with reverence and respect.”

Another criticism of the current representation of witches in pop culture is the lack of diversity and originality.  “The most irritating thing about media witches is that it seems like they’re all the same, or they all practice the same kind of witchcraft. I love that we’re starting to see more magic by people of color on tv like Voodoo and Lucumi, but the representations are still pretty overwhelmingly negative,” says Paige Vanderbeck, host of the podcast Fat Feminist Witch.

“Practicing witchcraft is largely a constant process of learning and an exploration of self, not just aesthetics (although it can be) or trendiness,” says Lisa Marie Basile, founding editor of Luna Luna Magazine and author of Light Magic for Dark Times: More Than 100 Spells, Rituals, and Practices for Coping in a Crisis. “The witch changes because we change. Our magic may dip or grow. Our magic may bend toward the light and toward the shadow; there’s no perfect idea of a witch, and she shouldn’t be boxed up and distilled so easily. In short, witchcraft is a deeper, more malleable and more beautiful thing than it gets credit for sometimes.”

Below, four movies that approach magic in ways that resonate with its practitioners.

This 1996 cult classic about four teenage girls who use witchcraft for their own gain has turned many to Wicca over the years. Rather than pointy hats and broomsticks, The Craft features real Wiccan rituals, covens, and young women trying to assert control over their lives. As a child, Bastile identified with the girls in The Craft because of her own, at times difficult, path. “I didn’t become a practicing witch for many, many years, but I always had a deep interest [in witchcraft]. When I saw The Craft, I identified with their magic coming largely from trauma,” says Bastile. “I loved that they bonded in pain and in loss and in grief.”

Part of the reason The Craft was so realistic to its magic was the fact that actual Wiccans were involved in the film’s making. Actress Fairuza Balk (Nancy) is a practicing Wiccan and helped the writers keep the storyline realistic, and Dianic elder priestess Pat Devin was hired on to advise the film (she was the who gave the writers the idea of binding someone’s powers).

This dark rom-com is sure to leave you spellbound. Based on the novel by Alice Hoffman and centering on the Owen sisters (Sandra Bullock and Nicole Kidman), Practical Magic shows spell casting, herbalism, and divination—along with some romantic entanglements and one inadvertent murder. “I loved everything about the Owens witches and how their magic worked, that it was just an innate part of them and that they oozed magic even when they weren’t trying to,” says Vanderbeck. “And they worked with herbs they grew in their own garden!”

Some may be very surprised to see the well-loved children’s series appear on this list. However, for many, the Harry Potter series offers an introduction to witches—and it actually includes a great deal of secular magic. Hogwarts houses, for example, can be seen as covens, while Voldemort’s “dark mark” and the Deathly Hallows are depictions of sigil magic.

“Harry Potter was the first time I really saw magick depicted onscreen,” says Herstik. “Witnessing the adventures and everything that happened at Hogwarts definitely impacted me growing up regardless of whether or not I realized it at the time.” 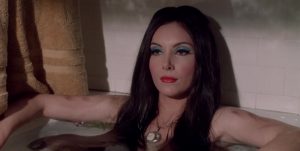 If you haven’t seen The Love Witch, you are sleeping on one of the most glamorously feminist witch films of the modern era. Written, edited, directed, produced, and scored by Anna Biller, this comedy horror is about Elaine, a modern-day witch who uses magic to make men fall in love with her (spoiler, it doesn’t end well for them). “[The Love Witch] has some really potent and accurate moments relating to Neo-Paganism—the holidays, the sex positivity—and is just art and glamour and color magick at its finest,” says Herstik.