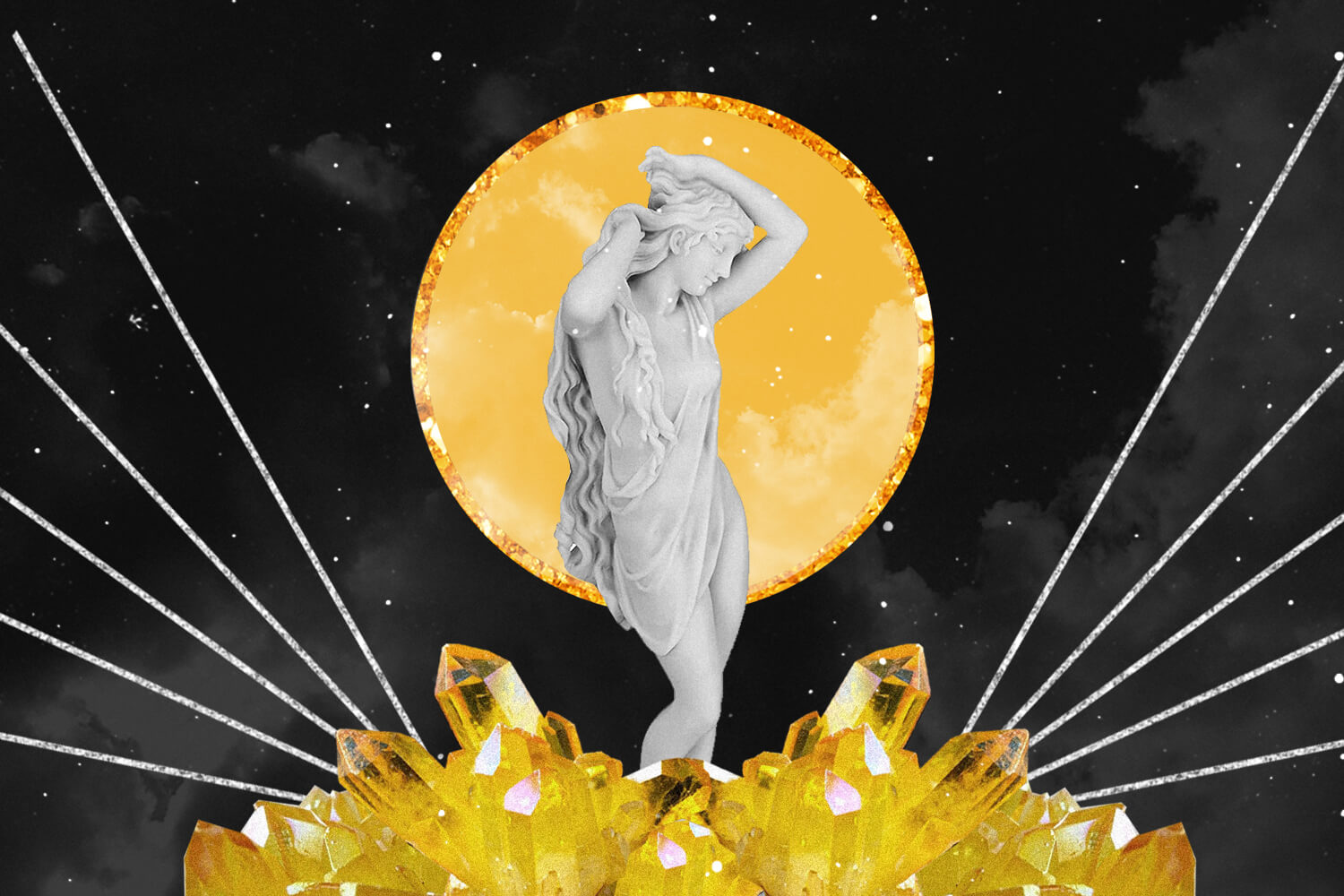 Yellow quartz, or “lemon quartz,” has many different crystal healing uses. Here, learn more about the benefits of yellow quartz and how to use it.

We spoke to astrologer Kim Woods, to help narrow down exactly how powerful yellow quartz can be.

First of all, there are a lot of names for this crystal. According to Woods, “citrine, lemon, and yellow quartz are all the same.”

However, there is a difference between natural yellow quartz and quartz in its fired state. Woods explains that raw yellow quartz can be found in Brazil; they are usually yellow in color with a green tint.

The yellow crystals we see in the stores are a manufactured version of lemon quartz in its raw state. Typically, according to Woods, clear quartz or amethyst is used when firing so the crystal can withstand extreme heat. The extra addition is also what gives the crystal we see in spiritual stores its amber, orange shade.

“Citrine is so powerful,” says Woods. “It’s like drinking in the sun.” Because yellow quartz is so magnetic and has so many different uses, it’s arguably one of the most powerful and cure-all kinds of stones out there.

The best part about it? Yellow quartz transmutes energy and is self-cleaning—which means you don’t even have to cleanse your crystal, says Woods.

This crystal is known as the “merchant’s stone” because it helps the beholder gain prosperity in all aspects of life. Not only does it attract opportunities and money, but it also inspires confidence and power so that you’re able to easily navigate the life around you.

Here are a few keywords that Woods associates with yellow quartz:

Yellow quartz aligns with the solar plexus chakra—which is the chakra located just below the ribs and represents intellectual thought. It’s for this reason that it’s able to help you radiate your power out to the world. With a yellow quartz on your person, Woods says that you’ll be more commanding and authoritative.

In some cases, yellow quartz is also associated with the sacral chakra—which is located right below the belly button. This chakra represents creativity and imagination… as well as the sexual organs. Given that yellow quartz brings some serious vitality, this would make sense!

Some believe that the energy of the stone flows first through the sacral chakra, and then journeys into the solar plexus chakra thereafter.

This stone is associated with Leo energy because Leo is ruled by the sun. But yellow quartz brings vitality, as we’ve explained. So, naturally, it associates well with the other two fire signs: Sagittarius and Aries.

Yellow quartz also pairs nicely with Scorpio, according to Woods—thanks to Scorpio’s nature to prosper and succeed. If you have prominent Scorpio placements in your birth chart, whenever you wear or use this stone, you’ll have enough charm to persuade anyone to do what you please.

According to Woods, yellow quartz heals all the “bodies,” such as physical, mental, and emotional. So, it’s a great little crystal to have on hand wherever you go.

Physical: Yellow quartz is all about energy. So, it can be used as a pick-me-up when you’re feeling sluggish. It can also aid in metabolism (as it is a very energetic stone) and digestion.

Emotional: Since this quartz is such a self-confidence booster, it’s the ideal crystal to have around when you’re dealing with issues of self-esteem or even if you’re experiencing depressive symptoms. Finally, yellow quartz promotes confidence, so it’s best used when you’re about to face a fear.

How to Use Yellow Quartz

Woods suggests placing yellow quartz in your kitchen or family room, so you bring a nice warm vibe to the center of the house. “It helps improve everybody’s mood,” she says.

For business, Woods suggests keeping a yellow quartz by the cash register or computer. It’s best for business owners, CEOs, writers, marketing or salespeople, and artists.

For personal prosperity, try adding a small yellow quartz to a pocket in your wallet or a coin purse.

When you need the crystal for a self-confidence boost, try wearing it in your jewelry: necklaces, bracelets, rings, and earrings can all be found with yellow quartz.

Wearing yellow quartz will be especially helpful when you’re planning to do something that scares you, such as public speaking. You can also get a yellow quartz “worry stone” to hide in your pocket and help ease the anxiety before a big event.

Is citrine a quartz?

Citrine is a quartz, yes. As mentioned above, citrine, yellow quartz, and lemon quartz are all the same stone.

What does raw citrine do?

Raw citrine innately has more power than your typical tumbled stone. If you’re able to get your hands on a natural yellow quartz, you’ll receive double the energetic power from the crystal.

Are clear quartz and quartz the same?

Clear quartz is a form of the genre of “quartz” crystals. Citrine, or yellow quartz, is another form of the quartz genre.

Does a quartz crystal always have six sides?

Quartz can come in many forms, with various sides. So, the answer is no.

How are quartz crystals (including yellow quartz) formed?

Natural yellow quartz is hard to find. But, in general, quartz crystals are formed when silicon and oxygen atoms get stuck together and stack on top of one another. As the atoms come together in very high heat (think: volcanoes), the silicon dioxide will dissolve. Once the temperature drops again, the substance hardens to form a crystal.

Does the Full Moon Affect Sleep?