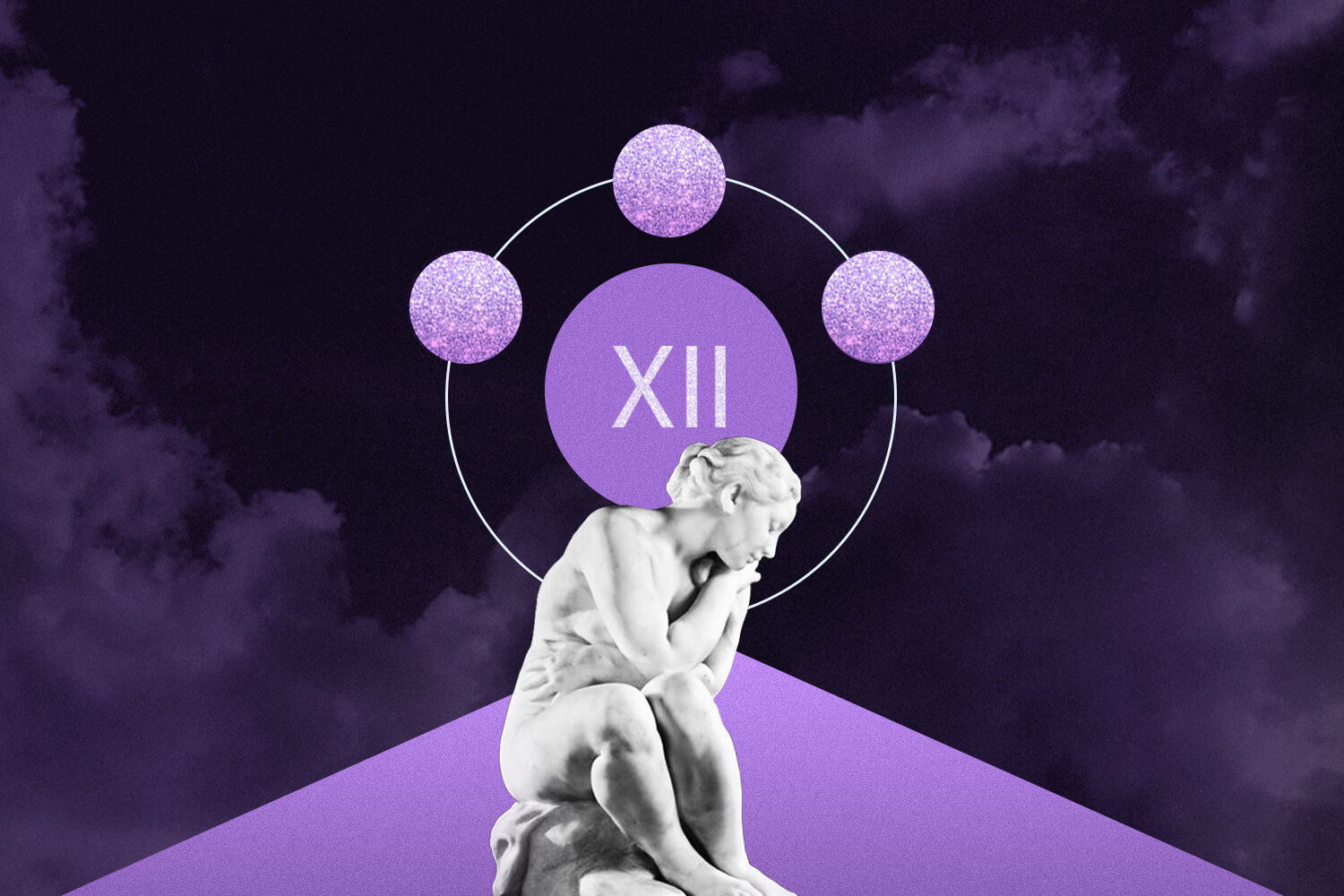 A stellium means three or more planets in a House. Here’s what being a 12th House person means for your natal chart, synastry, and psychic nature.

In astrology, the 12th House is often referred to as the house of the subconscious. It’s how we interact with the world without being conscious of it. Our private moments. It’s also where our shadow self lives. The 12th house shows up in our sacrifices, our dreams, our hidden talents, and how we find self-acceptance.

The 12th House can also give you insight into who you were in a past life as the House represents our karmic debts—things that happened in your past life that you need to pay in your current life. While people like to call this house “where our inner demons live”, it’s more about the lessons you will have to learn in this life to heal and move on.

A 12th House stellium occurs when three or more of your planets are in your 12th House. People with a 12th House stellium are typically mysterious, spiritual, and have a strong intuition, often feeling psychic. They are very private, not willing to show their true feelings to others, preferring to deal with any matter—especially emotional, by themselves. Extremely guarded, they will often intimate the emotions and mannerisms of the people around them to “fit in”.

A 12th House Stellium often feels things deeper than most people, if they try their best to hide them. 12 House is sometimes viewed as the house of suffering, and 12th House Stellium is attracted to those with emotional wounds in the hopes they can “fix them”. Because 12th house Stellium feels their emotional wounds deeply, they’re prone to wallowing in their pain. The “suffering artist” archetype is common with this stellium (especially if the moon and Venus are in this house). Nothing comes easy to a 12th House stellium and they may have to learn everything the hard way.

A 12th House Stellium lesson in life is to find a healthy outlet for their emotions and heal their inner wounds. This can manifest in spiritual practices, artistic pursuits, therapy, tarot reading, and uncovering your secret talents.

Synastry is the comparison of two astrological charts to determine the compatibility of a relationship. This can pinpoint the strength and weaknesses of the relationship and what they may need to work on. A 12th House stellium in a synastry reading can represent a spiritual relationship, that you may have known each other in a past life. You may feel drawn to this person without knowing why—like you’re magically pulled to them.

While this all sounds very romantic, it can also be a dangerous aspect. A 12th House stellium can manifest in a secret relationship. While it may be excited being with a mysterious lover, it can also be emotional and psychological draining, especially if they are dealing with hidden issues or are self-destructive, dragging you down with them. Trust your intuition—if something feels wrong, run away!

When three or more planets move into your 12th house, it can be a pretty intense time. You might make hospital visits, deal with secrets, feel “trapped” or isolated. It can also be a time of endings. While this may be a painful end, it’s important to remember that a fresh start is on the horizon. Take care of your mind, body, and spirit, and heal any lingering wounds, so you’ll be ready for the next chapter.

It’s also a great time to get in touch with your spiritual side. This is a great time to practice Tarot, astrology, divination, book a reiki session, or do some yoga. Whatever helps you get connected to yourself again.

In the Zodiac Signs

This is a very fiery placement that often acts on impulse. They feel everything with a burning passion, but their boldness and temper can burn bridges. 12th House Aries Stellium may have been warriors in their past life, still fighting battles today.

This can easily be a gossipy stellium where they can often spill secrets on accident. While they have a terrible time keeping secrets, they often have a talent for learning languages and healing through communication. In a past life, they left a lot unsaid, making them feel they have to get it all out now.

This is a very secretive and protective placement with a hard outer to protect their sensitive soul. This stellium often has family secrets and complicated relationships with their original family. They have to break a lot of generational curses that can be overwhelming.

These people have very dramatic inner lives. They have a strong desire to be “the main character” in their lives but aren’t often given the attention they need. They may have been very important in their past life and can feel frustrated that they aren’t being recognized in this one.

Virgo 12th House stelliums are very health-conscious, almost to the point of obsession. Their need for “perfection” is often a coping tool to deal with the chaos of life. Their fear of making mistakes can lead to nervous tension. Writing can be a good healing tool.

Relationships are a struggle in this placement. In a past life, they make have been burned by love, though they still yearn for—and romanticize—it. Deeply indecisive, they will avoid decisions to the point of being passive. Art therapy is beneficial here.

This is a very intense aspect where a lot of karma will need to be unpacked. This placement will have a strong interest in psychology, death, and ugly truths. They aren’t afraid to walk on the darker side of life. However, they mustn’t go on a quest for power. It won’t end well.

Escape artists, Sagittarius stellium will often try to run away from their problems by traveling to new places. In a past life, they may have been a spiritual person, almost to the point of unhealthy obsession. Their karma is to find the balance between spirituality and reality.

A 12th House Capricorn stellium often had to grow up quickly and spent their childhood being the “adult”. They always take on extra responsibilities, make success something they both need and fear. Their lesson is to take a leap of faith to achieve their ambitions.

In a past life, they may have been a human rights pioneer, fighting for a cause they believe in. Because of that, they are often sensitive to the suffering of others. However, their efforts may be misunderstood and their unconventional ideas can get them shunned. They may need to work in secret to make a difference.

While the 12th house is Pisces nature placement, having multiple planets here can be both a blessing and a challenge. A Pisces stellium is highly intuitive, they are likely to have psychic dreams. They are empaths, feeling everything on a personal level. This placement needs to learn to set boundaries to find peace.

What is self-undoing, and how does it relate to the 12th House?

How do you know what House your Stellium is in?

You can determine your stellium House by reading your birth chart or talking with an astrologer.

How many Houses are there in astrology?

There are 12 Houses on the astrology wheel, each one representing a different aspect of our lives.

7th House Stellium: Meaning, Synastry, How to Find It