As the goddess of war, victory, craft, and wisdom, Athena was one of the most important figures in Greece. Sometimes referred to with the surname “Pallas Athene,” she was said to have been born from her father Zeus’ head in full armor. Her birth represents a strong identification as a “Daddy’s Girl” and a warrior. Athena was also considered the patroness for heroes of ancient times, such as Hercules, and wore Medusa’s head on her breastplate after helping Perseus kill her—though that’s a myth for another time.

As an unmarried virgin goddess, Athena channeled her life force into her mental capacity and what astrologer Demetra George calls “creative intelligence.” Athena’s symbols of wisdom and war, such as the owl and spear, speak to her complex meaning to the Greeks. Athena demonstrates the ability to think for oneself, as well as the internal balance of active and receptive energies when head and heart combine. In her role as significator of craft, she taught practical arts such as pottery, weaving, and embroidery, and guided artisans with their artistic vision.

Read me: Asteroid Vesta Points to the Sacred Dimension of Our Sexuality

Astrologically, Pallas Athene, or Pallas, was the second asteroid discovered in 1802 and the third largest in size. While Mercury and other planets get a lot of attention around their retrograde, Pallas Athene, like the other asteroids, often gets left out. From May 17 until September 25, the asteroid begins its annual four-month movement backwards: from zero degrees Aquarius—next to Saturn—to 12 degrees Capricorn.

Collectively, this cosmic movement provokes us to examine our beliefs and balance polarities of thought to include information and logic aligned with intuition, or wisdom itself. Pallas’ gifts allow us to notice patterns and larger pictures helpful for creativity and problem-solving. In natal charts, this larger vision zooms in on our curiosity and highlights our unique version of genius. For this reason, it also can be associated with learning, teaching, and writing. Though when out of balance, it may become prone to black-and-white thinking or a bit of a know-it-all attitude—similar to Mercury.

Pallas Athene differs from Mercury in that there is less focus on linear thinking and planning, and more focus on pattern recognition and other ways of knowing. In this way, Pallas is able to bridge intellect with intuition, along with the many other paradoxes inherent in philosophical thinking. It’s sign placement and aspects offer clues to our way of understanding and perceiving, as well as how we express or observe creative intelligence outwardly. 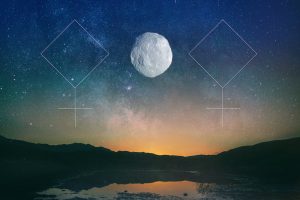 Pallas Athene in Aries or in aspect to Mars: Cognizance occurs through action, momentum, and the desire to initiate inspiration through thinking.

Pallas Athene in Gemini or in aspect to Mercury: Perception with this placement integrates opposites and sits with paradox intellectually and intuitively.

Pallas Athene in Cancer or in aspect to the moon: Feelings and emotions attune to how one can observe through basic needs and empathy.

Pallas Athene in Leo or in aspect to the sun: Creative intelligence takes on a heightened meaning of self-expression and new ways of thinking.

Pallas Athene in Virgo or in aspect to Mercury: The intellect revs up, creating awareness through traditional modalities of language, both spoken and written.

Pallas Athene in Libra or in aspect to Venus: This placement bridges and mediates the complementarity of the mind’s two hemispheres, as a pathway to balance.

Pallas Athene in Scorpio or in aspect to Pluto: This way of seeing aims between the lines and under the layers into what may be hidden and ready for the light of truth.

Pallas Athene in Sagittarius or in aspect to Jupiter: Perception points outward into large-scale vision and through the lens of morality and ideals.

Pallas Athene in Capricorn or in aspect to Saturn: The ability to make things real through awareness of their manifestation is where sight meets stability.

Pallas Athene in Aquarius or in aspect to Uranus: Awareness comes with sight into the future, or perhaps even prophetic and energetic frequency.

Pallas Athene in Pisces or in aspect to Neptune: Permeability of perception allows for observing beyond the physical realm and into a channel of the ethereal.