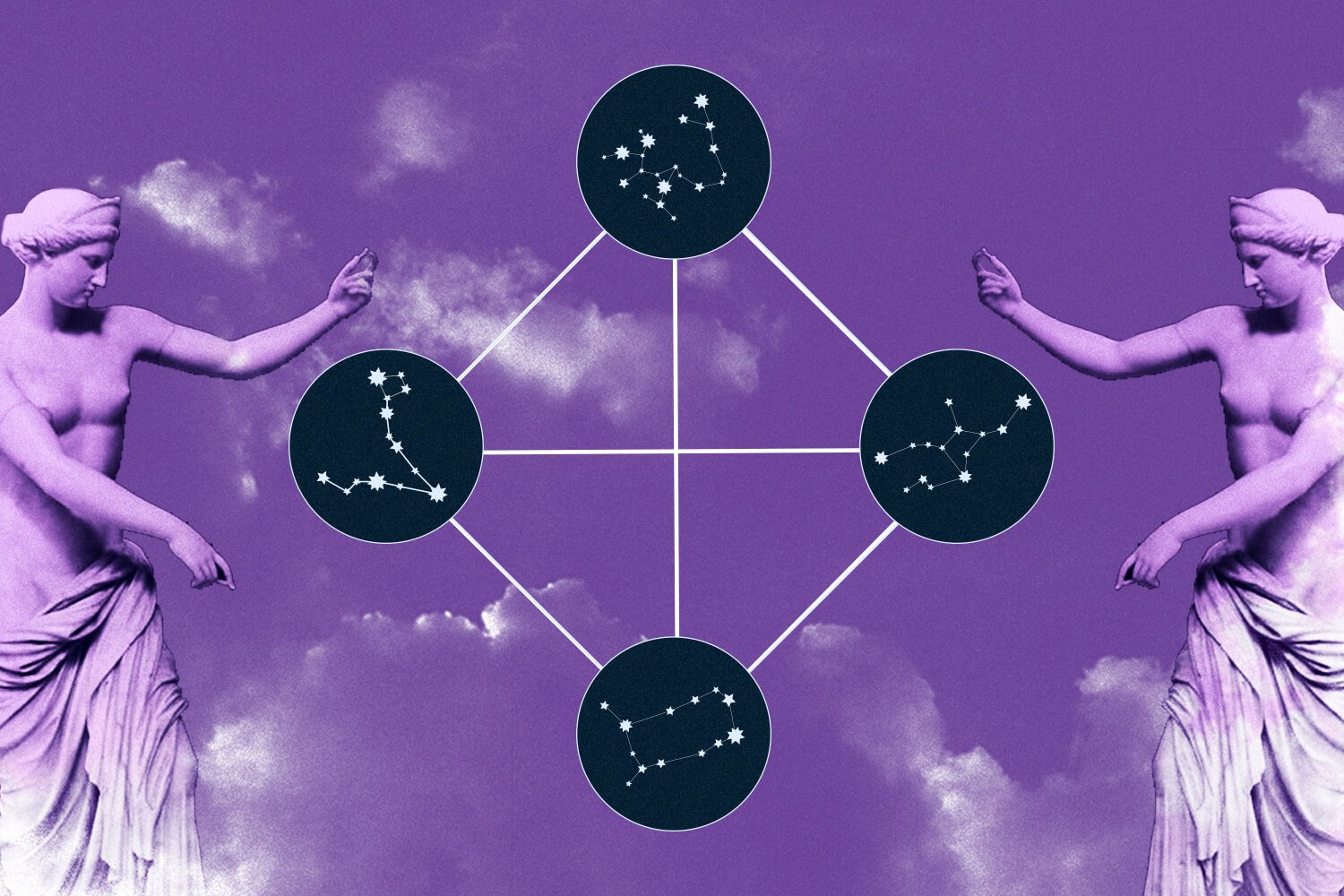 What Is a Grand Cross?

In astrology, a grand cross is when four planets are occupying each of the zodiac signs associated with one modality. For example, a fixed grand cross would mean that someone has four planets in fixed signs: one planet in Taurus, another in Leo, another in Scorpio, and a final one in Aquarius.

The grand cross, sometimes also referred to as a grand square, occurs when these four planets are 90 degrees apart, which also includes two oppositions with planets sitting 180 degrees apart. Every planet will be in the same modality—cardinal, fixed, or mutable—and each planet will show up in a different element: fire, earth, air, and water.

A mutable grand cross occurs when four planets are in the mutable signs of Gemini, Virgo, Sagittarius, and Pisces.

“Mutable signs are known for their adaptability,” Maria Sofia Marmanides, astrologer, Tarot reader and author of The One Card Tarot Journal, says. “Unlike their charge-forth cardinal counterparts or their get-it-done-at-all-costs fixed friends, mutable signs are more inclined toward flexibility and being able to handle nuance, inconsistencies, or contradictions.”

If you have to have a grand cross in your birth chart, Marmanides says, “this formation at least allows for some room for negotiation between the four planets that are activated.”

“If you have a natal mutable grand cross, it can sometimes feel like every planet in your birth chart is trying to get their way but working at cross-purposes with different parts of your personality, wants, desires and goals,” Marmanides says. Each planet, sitting in a different element, has its own agenda it would like to enact.

“No planet in your chart wants to be ignored—especially not one that is part of a grand cross. So, what can happen is that eventually one planet will assert itself, or go first so to speak, and the other ones will feel compelled to also react,” she says. “That could be in direct ways, or it could come out in subtle or more emotional ways, especially if one of those planets is the moon or a planet not in its home sign.”

The dramatics of how this energy plays out will depend on the condition of the planets involved. She also urges those with this configuration “to ensure action over-analysis and clarity over confusion.”

What does ‘square’ mean in astrology?

In astrology, a square aspect is when two planets sit 90 degrees apart from one another. These planets are at cross purposes and have different agendas. The square aspect in astrology is considered a tense aspect and of the nature of Mars.

Square aspects can create conflict and tension, but this type of planetary aspect also inspires action. It demands that action be taken and, oftentimes, squares actually help people reach their full potential. It’s through the challenges and hardships endured that squares can bring about determination and motivation.

What is a ‘double-T square’ in astrology?

In astrology, a “double T-square” is another name for a grand cross. A T-square occurs when two planets form square aspects while another forms an opposition. Marmanides explains, “For example, a planet in Virgo square a planet in Sagittarius and the Virgo planet opposes a planet in Pisces. The Pisces planet is also squaring Sagittarius, so it creates a T-square.”

A double T-square means that four planets of the same modality are involved. “A double T-square, more commonly called a Grand Cross, is when a fourth planet activates the final sign in that modality,” she says, “for example, a planet entering the sign of Gemini in the scenario above.

“Think of it like a 4-way stop sign. Each car is looking at the other wondering who is going to go first,” she says. “Frustration can ensue because action must be taken, but others may be slow to act or too quick to act, and it can create a pile-up energy, as each planet is in a power struggle to assert themselves—but not be pushed around.”

The secret to working with this energy is to channel it into action. Don’t let the tensions leave you at a standstill. This combination can be incredibly motivating once the person can sort through internal issues and find more alignment with their approach and desires moving forward.

What Does Sextile Mean in Astrology?

Polarity in Astrology: Meaning and Opposite Signs