Long before summer was about vacations and time off from school, the season was associated with the goddess Ceres, whose joy was said to cause the earth to bloom and grow. Mythologically, Ceres was the Roman goddess of agriculture, grain, fertility, and motherly relationships. In Greek traditions, she was known as Demeter, and most infamous for the relationship to her daughter Persephone. As the well-known story goes, Persephone was abducted—though some myths say she went willing—into the underworld by Hades, and Demeter spent her days mourning.

Archetypally, this myth—and, thus, Ceres—represents cycles of loss and return, attachment in relationships, and ultimately self-nurturing or self-care. This powerful symbolism of self-care also carries over into astrology with the first discovered and largest asteroid: Ceres.

In our natal chart, Ceres energy recognizes the paradox roles we inhabit as both our own parent and child. Its placement teaches us where we easily provide nurturance and care to ourselves and what we need to feel our best physically, emotionally, and spiritually—a.k.a. self-care.

Harness your life force with these breathing exercises.

While self-care has often been oversimplified, when we look more deeply, it encompasses a holistic approach to becoming our own best caregiver. Without an understanding of our natal Ceres, we may struggle a lot with unmet needs or confusion over how to be the best parents to our own internal children. However, with deeper exploration, this asteroid reveals our deepest needs and greatest self-care priorities.

While the moon in our charts showcases needs and emotional balancing and the sun representing what energizes us, Ceres focuses on the ways we can nurture ourselves on an even deeper level. House placement plays a large role in the other influences to our Ceres; however, the sign and planetary aspects offer clues to different combinations and the baseline needs for our self-care toolbox. 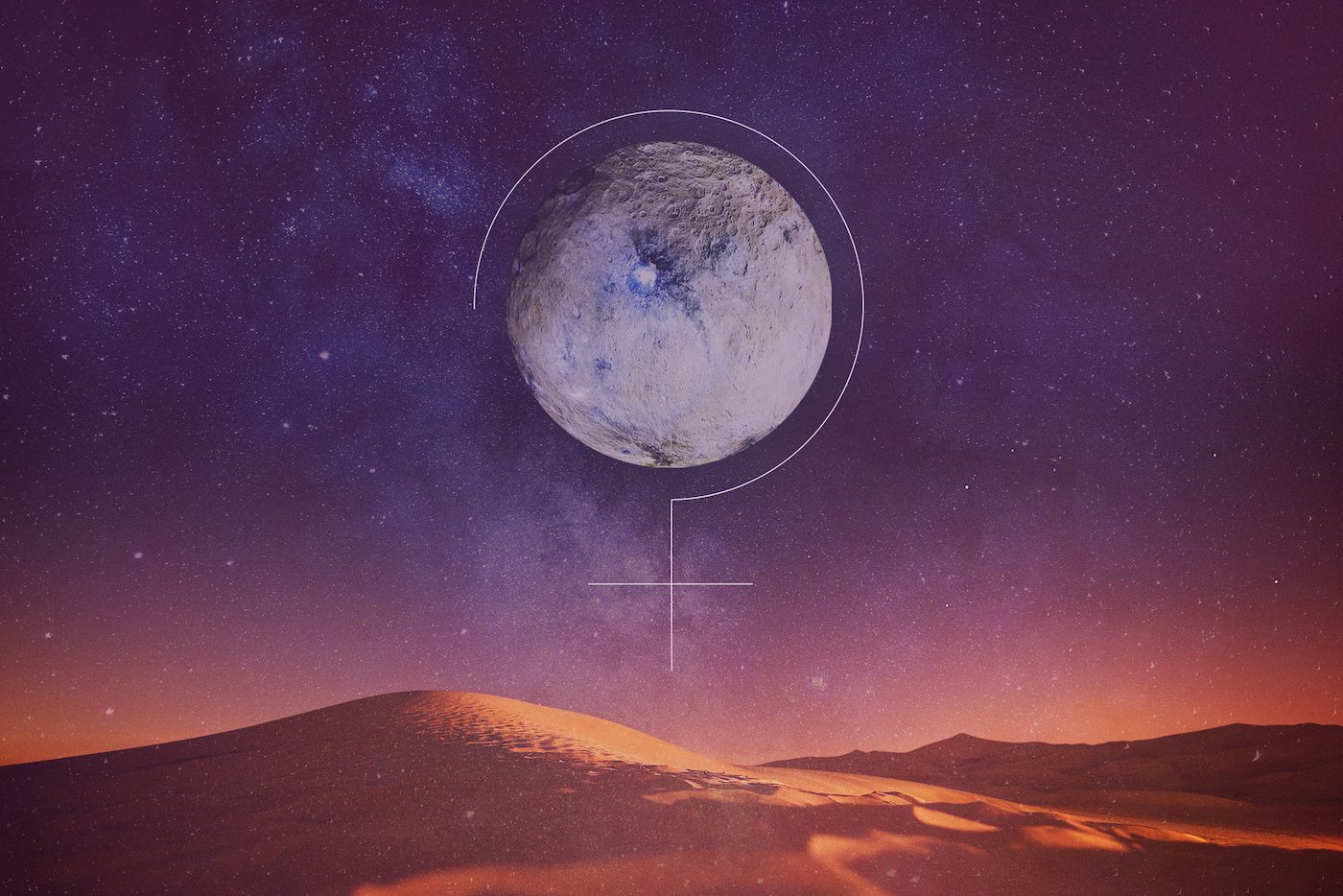 Ceres in Aries or aspect to Mars: Playing sports and being active ups your self-care game, especially when it involves a healthy dose of competition and independence.

Ceres in Taurus or aspect to Venus: Nurture and feed the senses through earthly connection such as being out in nature, enjoying good food, or cultivating pleasure.

Ceres in Gemini or aspect to Mercury: Enhance curiosity through reading books, watching documentaries, or signing up for classes.

Ceres in Cancer or aspect to the moon: Creature comforts come first such as being at home and cooking while practicing naming needs for stability and connection.

Ceres in Leo or aspect to the sun: Find more joy through self-expression in creativity or even as simple as soaking in some sunbathing (within reason of course).

Ceres in Virgo or aspect to Mercury: Keeping order in day-to-day life and staying organized can offer a sense of inner care, as well as sometimes over communicating what you need.

Ceres in Libra or aspect to Venus: Feeding ways to connect with beauty or exploring art and design can awaken more of self-care.

Ceres in Scorpio or aspect to Pluto: Psychological interests and practicing vulnerability connect you to the soul work exploration needed for emotional depth.

Ceres in Sagittarius or aspect to Jupiter: Vision and philosophy bring you down to your center or gravity, as well as vacation or any way of expanding horizons.

Ceres in Capricorn or aspect to Saturn: A sense of inner authority, commitment, and stability bring out your own caretaking nature.

Ceres in Aquarius or aspect to Uranus: Individuality and chances to express your unique gifts foster self-care as well as any chance to start something new—though doesn’t always mean finishing it.

Ceres in Pisces or aspect to Neptune: Meditating, music, and finding ways to be in the flow of things help keep needs met.

Understand the Asteroids placement in your chart. Join Astrology+