What is the “Castle Pattern” in a Birth Chart? 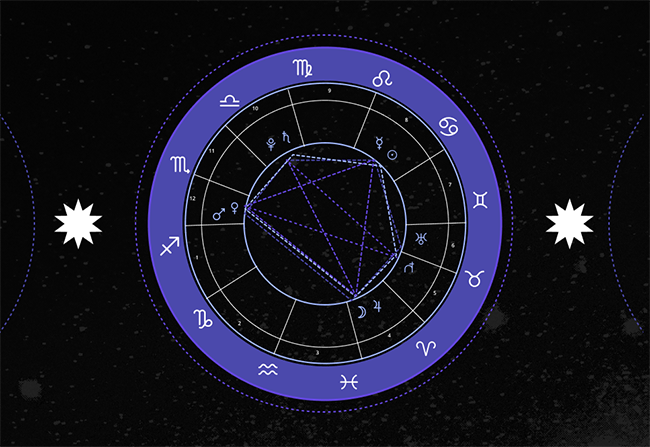 Have you ever gotten a birth chart reading and recognized a strange or prominent shape in your chart? There are a number of aspects in astrology (such as square or trine), but when many of these lines come together in a significant way, it can create bold aspect configurations in the chart.

One such configuration is called a castle pattern. To explain what it means and why it appears in detail, we chatted with astrologer Julia Mihas for the scoop.

What Is a Castle Pattern?

According to Mihas, a castle pattern is actually quite rare—as it’s composed of a Grand Trine (3 planets 120º degrees apart) that has two sides punctuated by sextiles (60º apart).

She also notes that the configuration may actually be less easy to deal with than we might first assume. “While trines and sextiles are considered ‘easy’ aspects, the “castle pattern” also inherently contains two oppositions made by those sextiling planets,” she says, “and oppositions are considered more challenging.”

Because castle patterns can only take place in either the “heavier” elements of Earth and Water or the “lighter” elements of Air and Fire, this will dictate exactly how much significance the pattern will have in your chart.

Every Grand Trine will occur in one of the four elements. According to Mihas, “Grand Trines tend to manifest as an easy talent or flow in someone’s life, and they can make people rather self-sufficient or even ‘a law unto themselves.’”

Sextiles occur between either the heavier elements (Water/Earth) or the lighter elements (Air/Fire). Because of this, every castle pattern will occur with all five planets in either heavy or light elements—which brings a strong sense of concentration on either side. Mihas notes that people with the Water/Earth concentration may be more sensual, grounded, or stability-oriented. On the other hand, people with Air/Fire concentration may be more spirited, cerebral, or quick-moving.

“I think elemental concentrations are often overlooked in astrology,” says Mihas, “and I notice that when people have a greater concentration of one element, then they tend to seek out others who can balance them out.”

Additionally, Mihas explains that since castle patterns have two oppositions within them, people who have a castle pattern in their birth chart may be more inclined to seek out relationships with others who are completely different from them. They may find the dynamics between duality more interesting than most people.

In addition to the castle pattern, here are a few more examples of astrology aspects:

Mihas notes that another rare configuration is the Star of David. This configuration involves two Grand Trines in either the heavier or lighter elements. It is composed of six planets—which means it would involve the majority of planets in someone’s chart. “This aspect is so rare that I haven’t come across any clients with them, though I have seen one pop up in a couple’s synastry,” she says.

A Grand Sextile appears when six planets are situated all at 60º apart—in the formation of a hexagram. Because the elements typically fall in those that complement one another, this aspect gives someone the essence of ease and flow.

The Yod aspect is also called the Finger of Fate or the Finger of God. In this pattern, there are two sextiles with one inconjunction between the two. While this aspect is indicative of challenges, it can also represent fated moments or spiritual evolution. Part of the reason that “fate” is associated with this pattern is that it can usually indicate someone who has plenty of karma to work through from previous lives.

A cradle pattern appears in the birth chart when planets make three sextiles, two trines, and one opposition. Since it has many supporting aspects (trines and sextiles), it can identify someone who is very progressive and productive. However, the opposition aspect can cause delays or dilemmas in that progress.

Do I have a grand trine in my chart?

In order to find this out, you’ll need to calculate your birth chart with our free birth chart calculator.