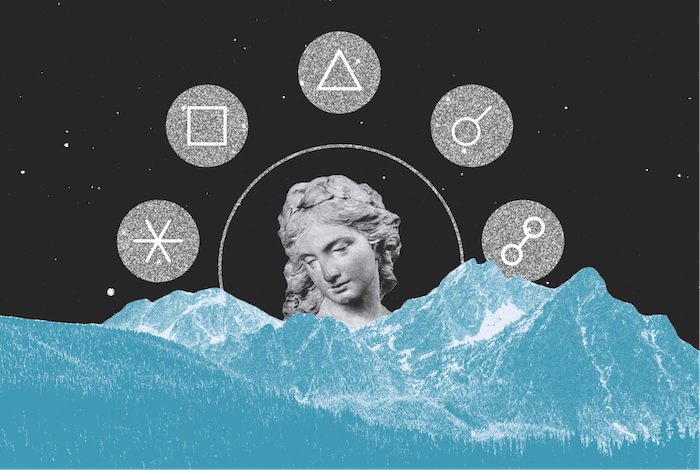 Here, we cover what to know about astrology-chart aspect glyphs (conjunction, trine, etc.), their meaning, and how to read them in a birth chart.

In astrology, aspects are angles that planets form between each other as they move through the zodiac wheel. Everything the planets do in the sky influences us. Just like we all get a little weepy when the moon enters a water sign, we feel the effects of planets when they are interacting with others. If you’re feeling energized and ready to take charge, it might be because be action-oriented Mars is in a positive aspect. Or if you’re feeling lonely in love, Venus may be in a negative aspect.

Aspects don’t only affect your daily life, they can also affect your personality. Your birth chart doesn’t just cover what signs the planets were in the moment you were born, it also covers many aspects that occurred the moment you came into the world as well. By understanding these aspects, you can understand certain parts of your life’s journey as well.

There are five major aspects: conjunction, opposition, sextile, square and trine. By learning the symbols and meanings of these aspects, you can understand your horoscope and help prepare for the future.

Just like planets and astrology signs, aspects have their own symbols that represent what they mean. When you see one of these symbols between two planetary symbols, that means those planets are aspecting in some way. Let’s look at each symbol.

A conjunction occurs when two planets are in at the same sign, usually 0 to 10 degrees away from each other. When two planets form a conjunction, their combined energies in the sign strengthen—for better or worse.

Depending on where the conjunction takes place, this can be a positive or negative aspect. A sun and Mercury conjunct can help you express yourself, but a Mars and Uranus conjunction can make you rebel.

Opposites attract … or do they?

These signs are so different from each other that they can bring out the best—and the worst—in each other. Whatever happens, it’s quite a learning experience.

A sextile occurs when two signs are 60 degrees apart, so when two planets are in favorable elements: like air and fire or earth and water. This is a very chill, friendly aspect that allows all to finally relax and get along.

One of the more unfriendly angles, a square occurs when two planets are at a 90-degree angle, creating a hard aspect, where a lot of drama and intense conflict takes place.

However, while the square brings us challenges, it can also force us to deal with uncomfortable issues to overcome them. Remember, every challenge helps us grow.

A trine is formed when two planets are about 120 degrees away from each other. Despite the distance, this is a very lucky aspect, bringing a period of luck, harmony, positive changes, and good vibes.

A good way to know if two planets are in trine is if they are in the same element (water, earth, air, fire).

How can you tell if planets are conjunct?

What does “hard aspect” mean in astrology?

A hard aspect is when two planets interact in two different signs that don’t get along. A hard aspect can bring challenges and obstacles that you’ll need to overcome. Check your birth chart to see if you have any hard aspects in your chart.

What does it mean if you see a lot of conjunctions in a natal chart?

It means you have a lot of planets in the same sign or house and might take on a lot of those signs’ traits. For example, if your Venus, Mars, and Mercury are all in Aquarius, you could have a lot of Aquarian traits, even if your sun sign is in Capricorn.

Big 6 in Astrology: What It Is and How to Find It