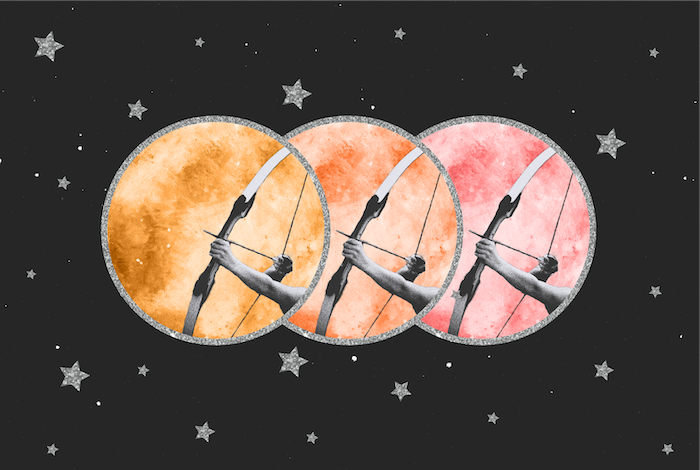 While every individual has a birth chart, not everyone has what’s commonly referred to as a stellium. Stelliums, pretty rare, astrological configurations, are a cluster of planets that strengthen the energy of whatever sign and house they fall in.

Oftentimes, if you find that you don’t relate to your sun sign, it can indicate that you have a stellium of planets in a different sign, offsetting your leading luminary. Here’s everything you need to know.

What a Stellium Means

When you have three (or four, including the sun or moon) or more planets in one sign in your birth chart, it’s referred to as a stellium. Stelliums tend to intensify the qualities of the sign they take place in, making it incredibly easy to identify with that sign’s traits.

Depending on the planets’ compatibility, stelliums can be supportive and harmonious, or tense and challenging. For example, if the stellium in your birth chart involves the sun, Venus, and Jupiter, it could be more beneficial. However, it might be more constructive or challenging if it involves the moon, Mars, and Saturn.

If you have a stellium in the cardinal, fire sign of Aries, for example, it’s probably incredibly easy to initiate new endeavors with excitement and vigor—it just might be a challenge finishing what you start.

If you have a stellium in the fixed, earth sign of Taurus, you might find prioritize comfort and security over everything and hate being rushed. It’s likely a real challenge to work against the energy of your stellium given it’s such a potent configuration.

The house your stellium falls in can also describe the areas of your life that tend to be incredibly significant.

Stelliums in All the Houses

If you have three or more planets placed in your first house of self, you’re meant to prioritize developing your sense of autonomy and independence over most things. It might sound selfish, but it’s essential that you put yourself first, and, based on the planets involved, it’s essential that you allow yourself to channel those energies outwardly as much as possible.

Money and resources are incredibly emphasized if you have three or more planets in this house, and the relationship you have with your own time, finances, and energy is strongly highlighted. The nature of your relationship to this house is determined by the planets placed here, but overall, many decisions you make in life are most likely fueled by your desire to obtain or secure possessions.

If you have three or more planets in this house, you prioritize communication, learning, and your personal hobbies more than the other aspects of your life. Because this is also the house of siblings and close relatives, you might find that you have a significant relationship with either one or more of your family members. The third house also rules over short-term travel, so you’re constantly on the go.

With a fourth house stellium, your home, family, and heritage are typically an incredibly important part of your life and are the determining factor of many of your decisions in life. The planets involved can add more context to the relationship you have with your parents as well as your lineage, and, because this house is at the very bottom of the chart, it can also indicate that you’re someone who prioritizes privacy.

With three or more planets in the fifth house of creativity, children, pleasure, and romance, this is likely an area of your life that you tend to prioritize more than others. Because this is considered to be one of the most fortunate houses in a birth chart, you might find that you’re constantly seeking to be entertained, or you entertain others often. Your children, or the children you spend time around, have a significant impact on you.

If you have three or more planets in the sixth house, you’re someone who focuses on your work, routines, health, and habits. It can be challenging to navigate life without some sort of ritual in place, based on the planets that are placed in this house. This is considered to be one of the houses centered around labor, so you’re likely someone who’s always aiming to be productive and of service to others. With a stellium in this house, it’s important that you use your energy wisely—while it’s great to keep busy, it’s important that you’re busy with the right things.

If you have a seventh house stellium in your birth chart, your romantic relationships and partnerships are essential, especially close, personal ones. With a stellium in this house, it’s important that you find a way to maintain boundaries between yourself and other people because it can become very easy to prioritize others over yourself.

If you have a stellium in the eighth house, shared resources, boundaries, and the affairs of others are integral to your life. As one of the dark houses in astrology that deals with death, secrets, and finances, having a stellium of planets here can be a challenge. Depending on which planets are involved, you could have positive experiences in these areas. In this house, it’s essential to define what your responsibility is versus what isn’t with planets here, as an eighth house stellium can emphasize other people’s reliance on you.

With a ninth house stellium, you’re interested in travel, knowledge, and expanding your mind—usually more so than others. You might find that long-distance journeys are an incredibly important part of your life, or you seek out experiences with college/higher education, and regale with writing, teaching, or speaking. With a stellium in this house, your views on the world are highlighted as well, making you a natural-born philosopher, regardless of the planets placed here.

If you have three or more planets in this house, you’re someone who prioritizes your career, vocation, or public image. You’re most likely (or will become!) known publicly for something, and the planets in this house will add insight into what this area or industry will be. You’re bound to make a mark on the world through your profession with a stellium here, so it’s important that you embrace the limelight.

Your friends, community, and social groups are a major priority if you have three or more planets here, and the nature of the planets can describe the experiences you have amongst your alliances. Because this is one of the social houses, you’re someone who’s usually surrounded by a collective, and you just might be the person responsible for bringing others together.

With a twelfth house stellium, you might find mental health, withdrawal, and isolation are essential parts of your life. Your alone time is incredibly important, and, based on the planets placed here, this solitude could either be a period of intense growth, or it could be more challenging. As the final (and most afflicted) house of the birth chart, having a stellium of planets here means that you likely have a personal relationship to suffering and might be someone others come to for counsel or insight around hardships.

How to Know If You Have a Stellium

What are ‘personal planets’?

Personal planets are the sun, moon, Mercury, Venus, and Mars. They’re considered to be personal planets because they’re closest to earth, meaning that we tend to feel their impact more than outer planets (Jupiter, Saturn, Uranus, Neptune, and Pluto).