In astrology, Jupiter is known as the great benefic. Named after the king of the Gods, Jupiter's influence is, indeed, godlike. It bestows knowledge, abundance, good fortune, joy, luck, and wisdom. It imbues virtues of kindness, compassion, generosity, temperance, perspective, and objectivity.

Traditionally, Jupiter rules Sagittarius and Pisces, and is the natural ruler of the ninth and twelve houses. All of these signs and houses are associated with matters of spirituality.

The danger here is excess. It's important to know when you've had too much of a good thing. Jupiter's influence expands and magnifies what is present—for better or for worse—so that it cannot be ignored. But even when Jupiter is unable to give, (depending on house placement and aspects), it will always protect.

Due to its larger orbit, Jupiter enters retrograde phase approximately every nine months, for a period of approximately four months at a time.

Astrologically, retrograde planets mark an internal, introspective process, pertaining to the nature of the planet and the sign it is transiting. In the case of Jupiter, this manifests as a process and period of intense spiritual and philosophical growth on a predominantly personal level....

Jupiter's retrograde marks a period of profound inner growth. It is a chance to reconnect and realign with one's inner compass, indivisible inner truth, and greater, expansive consciousness—the source within.

Jupiter's retrograde will often bring detours and chances for course corrections in the area it is transiting. This is a retrospective journey which purpose is to look at the big picture, find temperance, and pull back if we've veered too off course.

There could also be a questioning of the laws surrounding matters of the house it is retrograding in. For some, this could be a phase of deep philosophical questioning, or a deep dive into esoteric, religious, spiritual, and metaphysical studies....

As one regains perspective and sees things in a new light, there is a discovery of previously missed blessings and greater potential. There could even be a realization of one's good fortune, even in a situation that previously seemed greater than the individual's capacity to handle it.

There's a sense of deep restoration or reaffirming of one's faith—in oneself, in the larger world, and in a greater invisible force that governs the laws of the universe and existence.

This marks a time to enter the inner journey of self-realization with greater awareness. Only then can there be a true discovery of one's gifts, and a greater appreciation for this gift of life.

Jupiter is the seeker. The retrograde phase suggests that what we seek is within.

Jupiter Retrograde in the Natal Chart

A native with Jupiter retrograde in their natal chart will tend to have an innate sense of righteousness, morality, faith, and wisdom beyond their years.

Depending on Jupiter's house placement, one will take a philosophical approach regarding matters of that house; seeking a deeper a truth. For example, in the second house, this translates to a quest for one's true values and worth beyond material possessions as deemed by society....

This is also the area of life where the native will retreat when the troubles of the world get to be too much. Jupiter is benevolent even when retrograde, allowing the individual to internalize positivity on a deeper level.

As inner seekers, those with Jupiter retrograde in the natal chart value kindness, generosity, compassion, reason, a purpose for existence, and a great awareness of their gifts. However, in the earlier years, they might find it harder to share their gifts with the world for reasons including lack of opportunities, self-confidence, and self-doubt.

But within the first 30 years of the native's life, Jupiter will station direct by progression, marking it a time when the wheel of fortune is turning, demanding a huge leap of faith.

This may seem like a total turnaround or impossible feat. But it's likely to be accompanied with a sense that one's entire life experience has been in preparation for this moment.

From this point on, as the individual regains inner faith, it will be easier to share one's gifts with the world without caring so much about how the gifts are received—or what is returned. Natives will know that they are a channel for a greater force; that the universe gives through them. 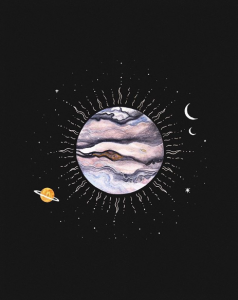