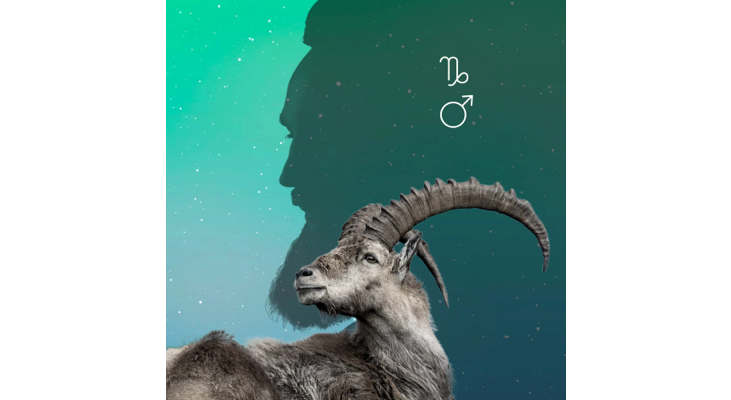 The Capricorn man in your life may be a mysterious paradox. Due to hard his reticent nature, it may feel like he’s hard to get to truly know. These men tend to build high, icy walls around their true inner selves that only the most intrepid climbers can eventually scale.

With traits that are often perceived as cold, callous, and uncaring, the Capricornian male’s secret is his raw and sensitive heart, which he feels he must keep shielded from the world. It’s common for these men to take a cynical or nihilistic view of most people, and not many are ever really invited into his inner circle. On top of that, you may not meet too many of these elusive Sea-Goats (unless you work with them), because they don’t tend to be incredibly social personalities.

Goal-driven and eternally work-focused, Saturn-ruled Capricorn men keep their eye on the peak of the summit they’re climbing. Very little can distract them from achieving their career ambitions. Though they may seem overly serious and gloomy, once you get to know these guys, you’ll discover a raucous sense of humor and lust for life that may seem to come out of nowhere, surprising even those closest to them.

Capricorns love dark comedies and, if they can find a way to laugh and find humor in the even the bleakest situations, they’ll be able to manage their innate, melancholic bent for dwelling on the negative aspects of life. They might not display their oddness overtly, but remember that a traditional-looking or acting Capricorn man is actually an extremely peculiar and particular sort of fellow beneath that nondescript veneer.

Expect to find some unusual tastes underneath that business suit or work clothes, whether it’s a CEO type who lives for black metal music or a tough-looking construction worker who goes regularly to the symphony.

Capricorns are often pegged as “bad boys” in the zodiac, with their air of nonchalant cruelty and penchant for doom and gloom – but even sexier than your run-of-the-mill renegade rebelling against whatever you’ve got is a grown man who’s got his act together. Having something to back up all that brooding is way hotter than the typical black-clad heartbreaker (who works at the local gas station and probably lives in his parents’ basement).
A Capricorn is going to have money to take you out to dinner, and will absolutely have his own place (male Caps will typically try to purchase property early in life) – and not only that, these guys will already be in charge of their own empire.

Once you’re in love with a Capricorn man, you might feel that you only see him early in the morning before he heads off to work, or else late at night after he’s pulled a long shift at the office. As long as you have your own thing going on and are comfortable dating a workaholic, this should work out well. All the better if you are a generally optimistic sort of person who can stay happy and cheerful even when dealing with the grumpiest curmudgeon. Are you and your Cap a good match? Find out here.

Capricorn men can be somewhat craggy emotionally, but they are also sexy as hell – much like an embodiment of Pan, the goat-footed Grecian god. If you’re willing to put up with his sometimes cantankerous moods, your Capricorn man will reward you with steadfastness, loyalty, and regular, dedicated servicing in the bedroom. He will doggedly apply his famous work ethic toward your pleasure. A Cap man aims to please, and if you tell him what you like, he’ll do it until you can’t take any more!

The home of a Capricorn man can often feel more like a wild animal’s den or a monk’s hermitage than a particularly comfortable living space. Don’t expect to find a lot of comfy cushions or throw pillows cast about – or even a couch. Capricorns are all about function, and sometimes they forget that form (and comfort) are equally as important.

In the kitchen cupboard, there may be only one plate, one bowl, and one cup – because it seemed impractical to buy more “for no reason.” If you move in, you might want to bring your own. But beware: Trying to effect changes in the established ways of a Capricorn man might have you seeing his horns. He has things set up the way they are for a very good reason (in his own mind), and it will take a steady supply of rational arguments to convince him that shifting things around might actually be a good idea. This resistance to change and new ideas can also result in a traditionalism that might make his house look exactly like every other one on the block – with a white picket fence and beige paint. But inside, it is another story.

If you’re lucky enough to be invited in, you’ll see his library stuffed with rare books, or his collection of unusual objects and antiques related to a historical era that has captivated him. These men often own their homes and tend to stay put in them for years – unless they are forced to move by external reasons like rising property taxes or a career opportunity too good to pass up.

A Capricorn dad makes for a stern father, who tends to be an exacting disciplinarian – but they love their little ones and will work hard to protect their safety. They are excellent providers.

With a down-to-earth personality, Capricorn men are the most hardworking of all the signs in the zodiac. This is thanks to their ability to focus intently on the work at hand, whatever it may be, and steadily make progress until they attain their goal. Slowly but surely, one cloven hoof in front of the other, the determined Goat man will climb his own personal mountain with a combination of extraordinary perseverance and dedication to duty.
We’ve all heard the legendary tales of the guy who took a lowly position in a company sweeping floors as a teenager, and after many years of diligence, business savvy, and pure grit ended up owning the business. That’s Cap!

These ingenious Goats love to fly beneath the radar or be a fly on the wall – quietly picking up bits of information as they push their brooms around, appearing to be nothing more than a mere grunt to higher-ups who don’t always watch what they say around the underlings. The long game takes immense patience, a deep and persistent faith, and a belief in their own ability to eventually get exactly where they want to go.

Once he’s transcended his lowly station, a Capricorn man has to work hard to remember where he came from and stay somewhat humble – as it’s easy for the deadly combination of ego, power, and money to turn Mr. Goat into a bit of a tyrant. These men often end up in positions of power, moving from their rags-to-riches origins into positions where they have control and responsibility over many people. Government roles and work in finance often appeal to these lovers of stability, law, and order.

Capricorn men excel at saving money and putting away funds for a rainy day, but they can be notorious misers and greedy with all the abundance they’ve strived so hard to accumulate.

A Capricorn man can be tough one to shop for because he tends to loathe waste and frivolity. Still, he secretly longs to be showered with affection and attention.

This man may act completely disinterested in gift-giving holidays, but believe that he’s hoping you’ve discovered his wish list and have gotten him something in secret. Better act quick and get it for him before he buys it for himself, though – because a practical and often morose Capricorn doesn’t always expect to be treated by anyone else.

These guys can be the Eeyores of the zodiac, difficult to cheer up once they’re in a solid funk. They can be hard to please, even when surprised with the most special of treats. Find out what puts a smile on his face, and take notes for next year!

Capricorn men love things that are well made: fine leather goods, tailored suits, jackets, antiques, or rare books. First editions with beautiful leather bindings from their favorite authors will score you points, as well as unusual treasures like a brass spyglass or a ship in a bottle. Ruled by Saturn, lord of time, Capricorns tend to collect antique watches and clocks, and some even repair these as a hobby on their days off.

If you want to take these guys on a trip instead of giving them something material, make sure it’s not a total surprise, and give them plenty of notice to plan time off work and to thoroughly research your destination. These men can be a bit pedantic and overly detail-oriented in their approach to life, but if you keep an enthusiastic and positive attitude, you’ll find that it’s not so hard to please your favorite Sea-Goat.