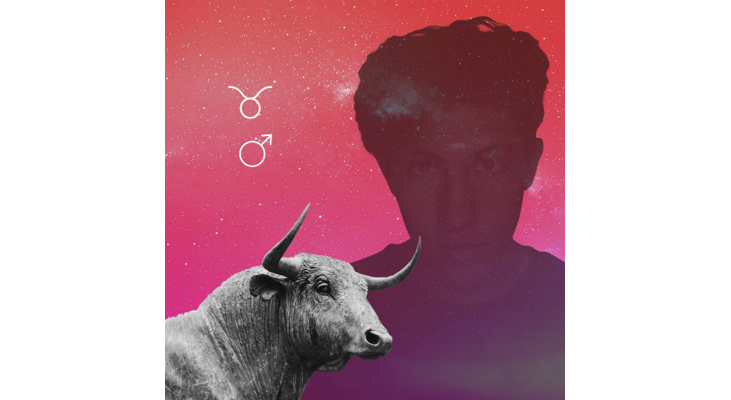 Despite often being seen as big, burly, tough guys, don’t forget that the Taurus man is ruled by Venus, the planet of love. If you’ve ever read the story of Ferdinand the Bull, you have your template for the Taurus man in your life. This big Bull would much rather be sitting under a shady tree smelling flowers than fighting to the death in the ring.

The Taurus man is definitely a lover, not a fighter – though he may quietly nurture a long-held grudge if you push him where it hurts. Generally, these guys are very easy to get along with, as long as you don’t encounter the famed Taurus stubbornness. He absolutely will not budge or give an inch once he’s entrenched on a subject, so don’t waste your energy trying to push him to see your point of view.

A fixed sign, the Taurus man is not usually into abrupt changes. Not much into taking risks, this guy would rather hang back, wait, and see. He could be described as slow and steady in all things: love, work, and even personal projects.

You’ll find that many Taurus men enjoy working with their hands and fixing things. A Taurus man will take his time to get it just right, and do it his way – which can be maddening to those around him.

These fellows can act deceivingly nonchalant and casual, hiding their intense and passionate nature behind a facade of unassuming stoicism. The truth is, they’re taking it all in, and gauging what their next move will be.
Dependable, tenacious, and extraordinarily diligent, a Taurus man is a great pick for your team, whether in work, friendship, or long-lasting love.

Taurus men make dependable and dedicated love matches for the right partner, one who will be willing to take their time with them and appreciate all they have to offer. Intelligent and very good with words (though he can often seem taciturn), he’ll think long and hard about the words he chooses.

A thoughtful communicator, if he’s not sure what he’s feeling or what he really wants to say, he may just stay silent. Try your best not to push him for a response, even though it may be agony to wait. Often, the Taurus man is not very swift when it comes to processing his emotions, so you’ll need to give him time to mull over changes or sensitive transitions. Be prepared to be extremely patient with him, and you’ll be rewarded by his immense patience in return.

If your Taurean is willing to get in touch with his inner Venusian and his feminine side, he’ll learn to trust his feelings. A Taurus man fully in touch with his heart and all aspects of his emotions is a truly powerful being to engage with. Unfortunately, all too often, these men will shut down hard when forced to make difficult emotional decisions and will find a way to numb themselves to what they are really feeling. Encourage him to express the full range of emotion by not reacting in an extreme way when they finally start to open up.  Are you compatible with your Taurus man? Find out here.

An open-hearted Taurus is a dream come true in bed – your sex life will be one for the books. Caring, thorough, and extremely desirous of bringing pleasure to his loved one, this man will not let you get away with being unsatisfied! Once you’ve won his heart, it’s generally yours for the long haul. Consider yourself lucky: His way of showing affection can be surprisingly warm and sweet.

A homebody at heart, the Taurus man is happiest hanging out comfortably on the couch, getting cozy with his honey. He has an appetite for comfort food, and may sometimes overindulge at home, which is his haven of rest, comfort, and pleasure.

Sometimes messy and prone to clutter, Taureans can hold onto stuff a bit too long. They tend to collect books, art, and musical instruments. Like the proverbial Bull in the china shop, a male Taurean may not be fully aware of his own body. It helps if his personal environment is as minimal as possible – but that’s a rarity with this earthy sign who adores his creature comforts. This guy needs a big comfy chair to collapse in, and lots of pillows to prop up his often-aching limbs, worn out from a hard day’s work. It’s healthy for a male Taurean to learn how to take things easy, and enjoy good times like relaxing with friends and family. And when he can host in his own space and create an environment for cookouts or movie nights, he’ll feel like the king of the world.

With traits like immense patience and gentle sense of humor, the Taurus man makes an ideal father. Children love to climb this guy like a tree, and often will bring out his silly and playful nature. The Taurus father will be a devoted provider to his household and take rules and traditions very seriously, often passing down aspects of how he himself was fathered. Consistent, dedicated, and kind-hearted, the Bull is a family man to the core.

Taurean dudes are solid, helpful, super sweet, and strong as hell. You want to be on their team should an apocalyptic situation ever befall you, because they’ve probably been collecting all sorts of seemingly useless information related to survival for years now.

They can build you a shelter out of random materials, they’ll know what plants one can eat (and which ones will kill you), and they’ll be happy to teach you how to skin a squirrel.

Always good with their hands, Taurus men usually enjoy playing music, making stuff, fixing broken things, or creating art. They tend to be rather handy in unconventional ways and have a formidable work ethic that sometimes becomes a little too intense.

It’s important to unhitch this gentle beast of burden from his self-imposed plow before he wears himself down to the point that he can’t even enjoy the sensual pleasures of life – the reason for all the hard work and dogged devotion to duty in the first place.

While his insane stamina under pressure is admirable, the slow-and-steady-wins-the-race approach often puts the Taurus man way behind deadline, forcing him to pull long hours to make it happen. Taureans often need someone to take their blinders off and sit them down to a delicious meal and a warm bed. That plodding, determined focus gets things done, though it’s often done the hard way. These guys may have trouble getting out of their own way and could benefit from learning how to conserve their energy.

A sense of purpose helps the Taurean man feel like his work actually matters – so it’s best for him to find a vocation that has a personal resonance or an aspect of creative self-expression. Usually very good about saving money, it would behoove the Bull man to learn to love cooking meals at home – he can blow a vast amount of money on eating out at restaurants if he’s not vigilant.

Show your Taurus that you love him through actions, not words, and you will win his everlasting loyalty. These men will work tirelessly to help those they adore, and they love it when others reciprocate that.

Even though acts of service are usually the Taurus man’s native love language (rather than flowers or frivolous gifts), he would appreciate well-made work clothes or warm flannel shirts in a vintage style. Books and musical instruments also make for thoughtful gifts, and you will never go wrong by getting him some kind of gourmet food item like fine chocolate.
Take him out for a fabulous dinner at his favorite restaurant and he’ll be putty in your hands. These guys secretly love being treated like kings and showered with affection – though you might not realize it until you really get to know them.

A Taurus man views time and energy as sacred resources, so if he sees that you’ve truly taken time and effort into doing something for him, he will value your gesture immensely.

His style is specific, and he will rarely venture outside of his comfort zone when it comes to his appearance, sometimes wearing basically the same personal “uniform” for many years. He likes what he likes, so do not try to change him to fit an idea in your head, or mold him to your ideal. Find out what his tastes are, and surprise him by revealing that you’ve been playing close attention all along.