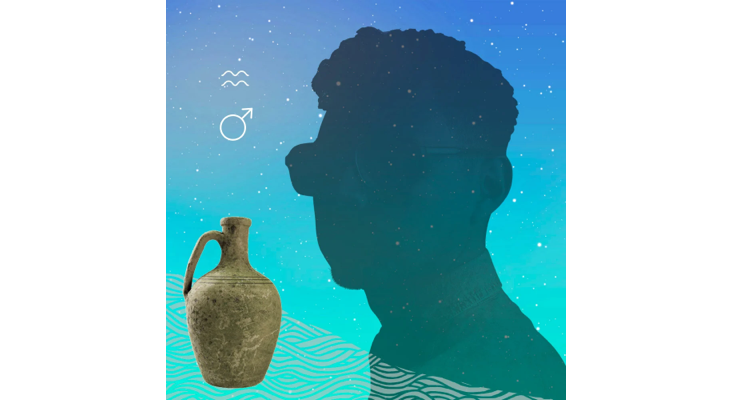 The Aquarius man can be a captivating—and often confusing—person.
He’s the kind of guy who many people are curious about, but few people ever truly understand. Much of this is due to the fact that these men are often perceived as being either ahead their time, or having ideas that are so radical and new that most people aren’t ready to hear them. Aquarius men often feel removed from most of society, and thrive best when they find a few like-minded individuals with whom they can share their far-seeing visions of the future.

Aquarian men are frequently perceived as wacky geniuses, full of brilliant plans and concepts, but not always capable of bringing these to fruition. They are social personalities who move in extremely varied circles – like the zany high school guy who was somehow able to move smoothly between the jocks, the nerds, and the freaks with little friction, getting along well with everyone.

If you go out on the town with an Aquarian, you may notice that he seems to know everybody, saying hi to the servers and gallery owners wherever he goes – but who really knows him? Few people are patient enough to really peel back the layers and discover what makes this guy tick.

The silvery heart of an Aquarian man is like a wonder of antiquated clockwork—this Uranus-ruled guy is often pulling out all the springs and cogs and trying to sort it out himself, but sometimes his emotions get jumbled up with his logic and make a mess of the whole mechanism.

Aquarian men are the original sexy nerds, much beloved by those who find intelligence to be the ultimate aphrodisiac.

These guys are often hilarious, with a zany sense of humor that borders on the absurd. This is a tool they use to charm the pants off whomever they’re flirting with at the moment – which could be a few people at the same time. They’re notorious bachelors, so it often takes someone extremely forgiving to put up with the infamous Aquarian eccentricities long-term, and they may go through a few marriages or partnerships before they find a really compatible match. Are you and your Aquarius compatible? Find out here.

These men are complete originals, refusing to conform to society’s standards and expectations. This may be displayed in their clothing, choice of profession, or political viewpoints, but it will always be obvious in their unconventional choice of mate. They often want to be with someone who’s even more transgressive and unusual than they are, and they frequently pair with a fellow Aquarian.

When not permanently bonded, the Aquarian man can take a businesslike air to sex, romance, or when he’s in love. These relationships can feel purely transactional, and he may prefer to just have “friends with benefits” arrangements. He can have a detached and even humorous attitude towards sexuality – and is known for being callous and leaving a trail of broken hearts behind him.

Eroticism can be experimental territory for an Aquarius, and he may enjoy mind games, role play, or taking a scientific approach to lovemaking by using the latest in sex toys with his lovers. Not all Aquarians allow themselves to indulge physically in what their minds may be fascinated by, so it’s helpful when they have an open-minded partner who’s willing to explore new worlds with them.

The home of an Aquarian man can feel a little bit like the workshop of a mad scientist – often with elements of his current projects scattered about, or some experiment taking place in the middle of the kitchen table (or in the refrigerator). He’s always got some bizarre new hobby taking up space in his life, and he rarely gets rid of the remnants of his past enchantments once they’ve lost their glamour.

He loves any memorabilia that relates to his chosen profession (or latest obsession), so if you share a home with this guy, he may need his own man-cave or a separate area to display all his favorite treasures and really spread out.

An Aquarian man’s personality often makes for diffident, somewhat distracted dads. They are much more interested in their progeny when the kids have learned to walk and talk, and they can take part in their education and engage in conversation. They shine their brightest when they learn to show empathy for their children’s emotions. Play and silliness come naturally to an Aquarius dad, and he will always be happy to let his children express themselves and evolve into whoever they want to be.

Aquarians rarely have conventional, boring desk jobs, much preferring to create their own schedules and not be limited by inhibiting corporate structures or lots of rules that don’t give them free reign to stretch the limits of their imaginations.

The realm of ideas and creativity is where an Aquarian man will truly flourish. And bringing people together to help humanity is always of the utmost importance to this cerebral air sign, who uses his mind and formidable intelligence to attempt to solve age-old problems. He is motivated by the idea of Utopia and creating a better world for all people, but sometimes loses himself in the big picture and can’t quite work out the little details necessary to get his would-be castle in the sky off the ground.
Ideally, the Aquarian man will put his genius traits to work helping out charitable organizations, or being a part of creative movements. You’ll often find this Water-Bearing wizard working with music festivals, teaching college students about transgressive politics, or trying to discover cures for terminal illnesses. Whatever he does, you can count on his profession being somewhat out of left field, and always completely unexpected.

Aquarians delight in delving into the universal mysteries of life, and are often curious about spirituality, concepts of oneness, and unity. But as much as he’s all about working together toward common goals, he may put others off with his odd ideas and quirky tactics. However, this man has immense conviction, and his intense focus will usually sway his teammates to see his point of view eventually.

As an arbiter of social change and champion for mankind, Aquarius is like a light shining in the darkness – provided he doesn’t get too lost in his own unique perspective and end up lost in a fervor of rhetoric like a 1960s cult leader who’s alienated his flock.

Saving money can be an issue for the Aquarian man, but his charm and charisma have a way of attracting rich investors who believe in his wild visions for the future. When he can manage his finances prudently, he can end up becoming extremely wealthy.

If you have an appreciation for the unusual and enjoy the hunt for something truly extraordinary, you will take much pleasure in finding gifts for your Aquarian man who makes a habit of collecting odd things. You may find that he’ll value and use the electric razor or fancy tooth-cleaning gadget that you got him for his latest birthday, but he won’t be as enthused about these as he will about the strange Victorian stereoscope with accompanying slides, or an antique jade-handled magnifying glass.

He likes objects that combine both form and function, and anything that appeals to his childlike sense of curiosity will be a natural winner with an Aquarian’s inquisitive personality and voracious hunger for knowledge. Don’t make the mistake of gifting this guy anything too run-of-the-mill – playing it safe with a boring gift will fail to capture his attention, and he may interpret anything too practical as a lack of interest on your part.

Books, magazines, comics, and beautiful art prints always captivate his cerebral intellect – and the more oddball, the better. If you are willing to dig through stacks of tomes at an antiquarian bookseller to find the obscure medical textbook of his dreams or a rare printing of some controversial political pamphlet, you will see this air sign’s eyes light up. He loves to ponder, to wonder, and to let his mind wander – so give him something that will hold his focus.