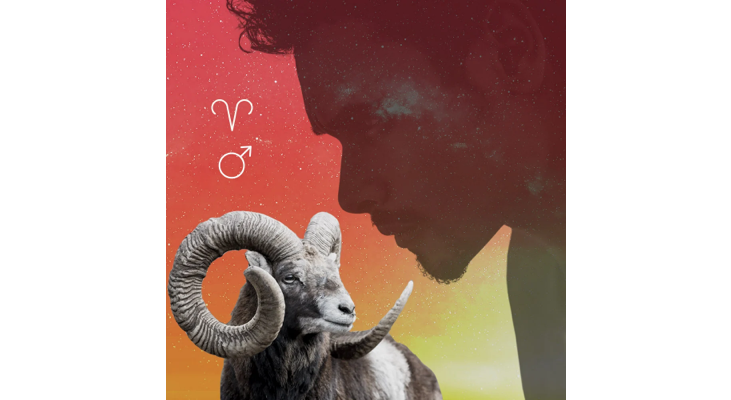 Being the first sign of the zodiac, an Aries man is always number one, so get used to his needing a lot of attention.

This kind of self-absorption isn’t coming from a truly narcissistic place, but from an honest self-assurance of his own capability and all-around awesomeness. It’s true that Mars-ruled Aries men are good at what they do, and they’re not shy about standing in the spotlight.

Don’t be surprised, however, when their private persona reveals more vulnerability than you might have expected. Underneath that bombastic bravado, a childlike naiveté can cause them to end up with hurt feelings that are often masked by humor. It can be hard to keep up with their rapidfire wit, flair for grand gestures, and impressive libidos – so prepare to do a little stamina training in those areas if you have one of these fine fellows in your life!

Stubborn as the Ram that symbolically represents him, the typical Aries man is a warrior for what he believes to be right and true. With driven, passionate, and courageous personalities, these men tend to be movers and shakers who make big things happen in their careers and communities. Their assertiveness can be mistaken for aggression, but often it’s just the raw enthusiasm and verve that propels these horned creatures up and down the mountain.

You’ll never meet a shy Aries, and though subtlety is not one of their strongest personality traits, they’ll keep you laughing and will always dazzle you with their dynamic energy, creativity, and wild moves on the dance floor. Aries men are mischievous but not devious, sometimes foolhardy but never fools, egotistic but not selfish, seriously sexy, and extremely fun to be around.

The Aries man is hot, hot, hot – physically and emotionally. Even when not conventionally handsome, these guys possess a kind of bravado and raw sexuality that oozes off of them, often making them infuriatingly attractive. There’s an innate confidence in the way they carry themselves – an energetic saunter, a wry grin, a double entendre that will make you want to stand closer to them in spite of yourself. Sex with an Aries man can be quite an athletic affair – lots of sweat pouring off slick flanks, acrobatic positions, and possibly a bit of consensual rough play.

When in love, these men can be possessed by a fleeting temper that can flare up unexpectedly. But they don’t tend to stay mad for long – unless you really cross them, in which case, you’re pretty much dead to them. That combustibility can implode a romance and create a tendency to burn bridges.  Are you compatible with your Aries man? Find out here.

The Aries personality is one of extremes – there is no middle of the road here – so get ready to be equally as clear about what you want, and to be sure that you are speaking your own mind. The Aries man wants a powerful match that he can respect, and doesn’t have a lot of time for passivity, mixed messages, or doublespeak – but once he’s decided he wants you, he’ll put up with a lot if he thinks he can attain the prize.

Conquests can turn into a matter of pride or a competition, but Aries men can be easily bored and require constant stimulation. The best way to turn on an Aries is to just completely ignore them – but beware! That kind of rebuff won’t often get you a second chance. These partners may truly be suited better to polyamory, so keep that in mind if you’re wanting to settle down and get cozy for the long haul.

This is not the sign of a homebody, so don’t expect the living space of the Aries man to be welcoming or comfortable. It works for them, and they have it all arranged the way they like it, but concessions might not be made for the desires of anyone else. There may just be one place setting or chair at the table, or one pillow on the bed. It’s not that they didn’t think of you, it’s just that they often don’t think of home as a place to share, or even really a place where they want to spend too much time  – not with all the exciting things to do and see out in the world.

Home is a place to crash, to change clothes, and maybe to roll in the hay – so don’t be surprised if your Aries paramour invites himself over to your place much more often. In fact, you may never see his space at all, unless you happen to share it with him. In which case, get ready to finish up the dishes he started to do before he got bored and moved on to something else, and make sure that wet laundry gets into the dryer before it starts to mildew. He’ll definitely begin a chore with great enthusiasm, but often get distracted by something new that absolutely needs doing before the first thing is ever completed.

As a dad, the Aries man is excellent at making little ones explode into fits of helpless giggling and happy to unleash his inner clown to delight children of all ages. This is the kind of father who may toss his babe high up in the air before catching them again, or toss them in the pool to teach them to swim – much to the chagrin of their possibly more safety-conscious and risk-averse co-parent.

An Aries man knows what he wants immediately, and goes after it with zero hesitation. This kind of man is often a leaper off of high cliffs, and not always a looker to see what lies down below. There’s a “me first!” mentality that can result in a sense of urgency in regards to ambition and initiative. This can make them natural leaders, ready to head up the vanguard.

With impulsive and idealistic traits, Aries tend to dream big, which means that they can be enterprising entrepreneurs, but many of their endeavors may end up being a flash in the pan. Often pioneers in their field, these fellows are always engaged in an intense race to be number one – to get their invention patented, to get the scoop, or to make their brilliant business idea the first of its kind. There is a sense of urgency to everything these Rams do, and their success is always defined by their primacy. If they aren’t the first ones to reach the highest peak of the mountain, what’s the point?

Aries men make great initiators and extremely hard workers. They will put in a lot of muscle at the beginning of the project, but sometimes lose interest or stamina halfway through, and need support in wrapping things up. An explosive temper can make an Aries a frustrating teammate – they have a hard time masking their often impatient personality when not in charge or working solo.

Risk-takers and gamblers extraordinaire, and often profligate spenders, Aries men can make others quite nervous with their devil-may-care attitude when it comes to managing money and issues of financial security. But luck is often on their side, usually helping him come out on top of seemingly impossible situations. Saving funds is not a strong point here, and these guys tend to fall prey to get-rich-quick schemes all too often.

A quiet night at home is not the ideal way to woo your Aries man. Instead, take him out to a loud, raucous concert and be willing to join him on the dance floor or in the mosh pit – or ringside at a Mexican wrestling match or a bullfight.

An Aries man lives for adrenaline, change, excitement, and novelty – so if you want to give him gifts, choose skydiving lessons, martial arts classes, or an exciting surprise vacation to somewhere he’s never been before. Surprises of all kinds are welcome here – the Ram is a sign who actually enjoys being caught a little off-guard, and will totally respect you for being able to pull off a surprise party without him finding out.

If you have to get him a gift, an engraved pocketknife or some kind of sports equipment might suit – and he might not tell you, but he usually secretly appreciates designer and name-brand clothing.

Going the extra mile will make him feel special – he wants to feel like he matters, so show him that he does by giving him gifts that are meant for him and him alone.  Your Aries man is an original – there’s no one else quite like him, so don’t think for an instant that a Hallmark card or something you picked up at the mall is going to cut it. If anyone else has it, he probably doesn’t want it.

Aries is the sign of the fiery, rebellious personality, so be prepared to expect the unexpected with them – in their interests, personal perspectives, and even in their occasionally flamboyant dress sense. They don’t want to be part of the conformist herd and will find a way to set themselves apart and stand out from the crowd.

Self-expression is a big deal for these guys, and they will always add their personal signature to whatever they choose as their focus.