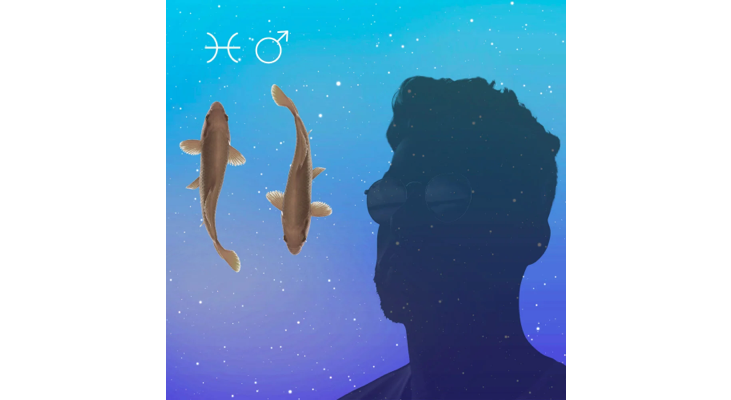 The Pisces man has the heart of a poet and the soul of a mystic, thanks to his dreamy water sign.

These Neptune-ruled visionaries love to dive deep and are never content to stay in shallow water – emotionally, spiritually, or intellectually. Small talk doesn’t interest them at all, and you’ll find that even upon meeting them for the first time, a Pisces man will ask you penetrating questions about yourself and your life for hours. It may take awhile before you notice that, though they know everything about you, you still know almost nothing about them.

A male Pisces holds his cards very close to his heart – only revealing his true personality to those he feels that he’ll be safe with. It often takes many years to really get to know this guy. He tends to keep his inner circle tight, and though he is friendly and social, only the chosen few will ever get past his internal gauntlet. This is because a Pisces possesses an extreme sensitivity, and everything affects him ten times more intensely than it might with any of the other signs.

Water has no boundaries. It can seep into even the tiniest crack and wreak havoc, melting barriers and dissolving that which was formerly solid. The power of Neptune, god of the sea, is of dissolution – that which seeks oneness. Water is our natural state, from the primordial ooze where we began to the amniotic fluid we swam in while within the womb. This is what Pisces energy is all about: fluidity, unity, and returning to our original source.

As the final sign in the zodiac, Pisces people are the most ancient souls, possessing powerful wisdom and often psychic ability to see and feel things beyond what most people can sense or understand.

A Pisces man in love will give his entire self to his partner, swooning in the dance of two souls merging as one. That’s his aim, to achieve complete harmony and unity as one being with no firm distinctions as to where his identity ends and his partner’s begins. This can be intoxicating to a fellow romantic spirit, but completely overwhelming for those who are looking to date more casually.

Because of this disparity, Pisces men often end up getting hurt and may wear their wounded hearts on their sleeves. It’s easy for them to end up feeling like the victim when their deep feelings aren’t matched, or when their partner suddenly wakes from the consuming spell of singularity to realize they haven’t been home in a week and all their houseplants are dead. It’s tempting to spend all night and day in bed with your Pisces – swimming within their embrace and getting lost in their kisses.

This is what they most desire: for you to forget that the world outside exists, and to give yourself over to love and the vision of indivisibility. When they lose themselves in love or dissolve into a puddle of tears after a major heartbreak, Pisces men may turn to drugs or alcohol to escape from their intense emotions or to numb their pain. Casual drinking or drug use may seem fun or innocent enough at first, but be on the lookout for the psychedelic daydreamer who can’t seem to handle being sober for any aspect of day-to-day life. Often the idyllic otherworlds of their substance-stimulated imaginations are much more attractive to them than the humdrum doldrums of boring old reality.

Are you and your Pisces compatible? Find out here.

Passionate, chivalrous, and thoroughly enchanting, this magical man is easy to fall in love with.

The home of a Pisces man often feels like a magical realm, a hermit’s cave filled with wonders, far removed from the bland settings of the other homes around it. It may look unassuming from the outside, but once within his domain, prepare to be dazzled.

Pisces guys often like to have aquariums or terrariums full of rare fish, frogs, or unusual plant life. They may raise orchids or just enjoy having plants and animals around them. There is artwork everywhere, usually created by him or by dear friends who he loves to support. There is a sacred atmosphere in his space, and a hush in the air that calls for a sense of reverence. You might instinctively bend to take off your shoes when you enter, regardless of whether or not he insists upon it – or feel awkward about using your cellphone inside.

Many Pisces men are extremely sensitive to noise and light pollution, and will often soundproof their homes or block out natural light from the windows, lending further to the sense of being in an insular womb-like cavern, a fairyland away from the normal world. You may lose track of time and forget that there’s even a world outside the beautiful one that he has created.

Some Pisces folks take their protection from polluting forces even further, installing water filters to get rid of contaminants and fluoride, or blocking wi-fi transmissions. Before you accuse him of wearing a tinfoil hat, remember that a Pisces man will pick up on things that other people aren’t aware of, so if it works for him, don’t knock it.

The Pisces dad makes a wonderful, gentle father, who tends to be very permissive, and is not much for disciplining his children or setting clear boundaries or rules.

Work and career are generally aspects of a Pisces man’s life that (like the rest of him) never conform to typical ideas of what a regular job should be. Often, he will invent a career for himself that you didn’t even know could exist, doing something so intriguing and bizarre that you just want to ask him a million questions about what it’s like to be a poisonous dart frog breeder or private investigator.

These men are rarely happy or successful trying to adhere to a 9-to-5 schedule. More often than not, they prefer to keep odd hours, maybe as serious night owls who would always rather work the graveyard shift. The freedom of being able to create their own way of doing things is essential – because they’re just going to do it anyway.

A Pisces man will have little regard for “rules for the sake of rules,” and will defy everything from dress code to issues on tardiness or taking breaks. Rather than marching to the beat of their own drummer, they tend to undulate vaguely to their own internal clarinet. This may infuriate managers, but if the people in charge of a Pisces can recognize the strange genius of the man they’ve employed and just let him do his thing (rules and regulations be damned), they’ll often be amazed by the results he produces and the inventiveness of his work.

Some structure can be good for a Pisces, who will either start work too late in the day to actually get anything done or else just work nonstop for days on end until he collapses from exhaustion.

Money can be an area of difficulty and strife for your Pisces man, who loves to spend profligately and may find that coins spill out of his hands like water. This Fish needs to learn about saving his dollars away for a rainy day.

If you want to buy the perfect gift for a Pisces man, choose something that feels like it has magical powers.

Not just any everyday object will do – it needs to be something that he will feel is imbued with meaning. Usually, a Pisces will not adhere to one mystical path or religion – choosing instead to mix bits of this and that into a hodgepodge of traditions and beliefs that suits him best. “Take what you like and leave the rest” tends to be his philosophy, and he sees all paths as being one anyway, so he has no issues in placing a statue of the Buddha next to a Catholic saint or Pagan goddess image.

A Tibetan relic or a huge chunk of a crystal will probably please him to no end, earning in a place of honor on one of his altars. You might gift him a piece of black tourmaline, obsidian, or shungite, which will protect against negative energy (which he has a tendency toward being open to absorbing).

Jewelry made of these or other semi-precious stones will often appeal, as romantic, emotional Pisces men usually are not uncomfortable exploring their feminine side. They may enjoy wearing perfume or oils and like to always smell delicious. Based on their innate traits. many Pisces men can be fastidious about their personal cleanliness habits and appearance, so scented bath and body products will be appreciated by this water-loving sign.