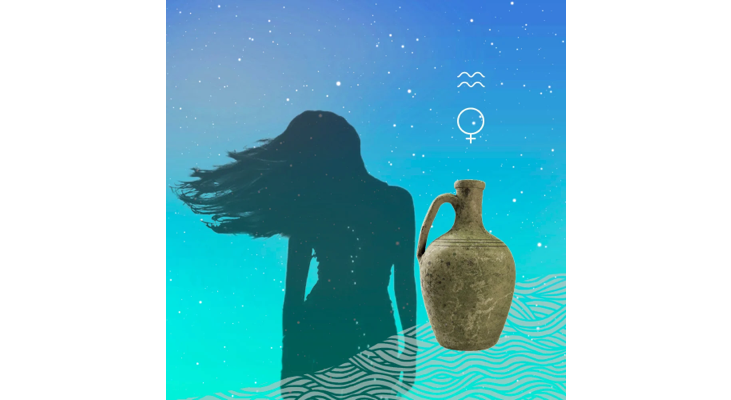 The Aquarius woman can be a little bit of a conundrum.
Brilliant, passionate, charming, and quirky, this air-sign woman dwells in the realm of ideas – often giving more credence to the elaborate visions of utopian society and how she believes things “should be” than to how they really are.

An Aquarian personality does not conform to any societal standards. She prefers to live on the fringes, and is always thinking outside the box. These women are often motivated by social justice and change, deeply desiring to contribute to the cultural shift, particularly in issues of poverty, world health, equal rights, and prison reform. The Aquarius woman will show up at protests, sign petitions, activate leadership, and organize meetings to educate groups of people united by a common cause – because she cares immensely about the plight of humanity, and wants to do whatever she can do to heal the world and help make things better.

There is a detachment to her passionate charcteristcs, however. These causes are only ideas to her, and do not become real issues until she actually goes and experiences the situation for herself, firsthand.

As much as she is involved in trying to help save the world, an Aquarian woman can lack empathy for her closest friends and family. She might not be a patient, listening ear – and probably isn’t the one you instinctively call up in the middle of the night when you need to vent. Displays of intense emotion from other people often make her uncomfortable, and she sometimes mistakes others’ vulnerability for weakness. Many of her friendships are purely intellectual; she enjoys delving into heated conversations and debates about politics or religion. Aquarians can talk easily to anyone, about anything, and tend to have many friends from a variety of social groups.

Aquarian women radiate a cold glamour, like the cool, faint glow from a distant star. Though they might be sitting right next to you, there’s a sense that their souls are thousands of light years away, so removed as they often are from matters of the heart.

It’s not that they can’t be warm, sensual, and engaged lovers – more often than not they are, especially at first. But what they really fall in love with is a conceptual relationship, often becoming completely caught up in plans for the future instead of really investigating how they feel about their relationship in the present moment.

Aquarius women may invest energy in long-distance courtships, with lots of letter-writing back and forth and countless fevered texts in the wee hours. But their ardor may sink to a simmer after the heated boil of anticipation wears away. Daily routine and the sometimes dull realities of partnership – especially a domestic one – will often cast a chilly air over the Aquarian woman’s formerly steamy libido. It’s usually best for her to have her own space, or at least a room to call her own, away from her beloved. This is an extremely independent woman, who rarely likes to be pinned down to one place for too long.

Communication is important to those born under the sign of the Water Bearer, ruled by Uranus, especially electronic transmissions, which she may prefer. A powerful intellect is a majorly exciting trait for all Aquarians, who self-identify as “sapiosexual” (or, aroused by intelligence). You’ve got to be able to turn a phrase if you want to turn her on, so brush off your dictionary and thesaurus and get to flirting.

These women are rarely boring or vanilla when it comes to sex, so if you’re into trying new things, you’ve likely found a willing partner in your Aquarian babe.

Aquarians rarely stay in one place for long, and so the concept of home can be somewhat amorphous for these women who love to travel and feel most comfortable on the rambling road. Unconventional living spaces like yurts, travel trailers, or trucks that have been converted to include a bunk and kitchenette work well for this lady who is often on the move. She will make do with her corner of a giant warehouse, or living in a shed or cabin – managing to quickly make her space feel magical, a visual reflection of her individual personality.

Aquarius women love seeking the beauty in the world and find themselves in awe of nature. They tend to be able to see the sacred in the sometimes brutal cycles of life, as when a spider devours a fly. Her home is often strewn with the remnants of whatever late-night hobby she’s thrown herself into this week, whether it’s experimenting with natural dyes or repairing something mechanical. Finding nuts and bolts amongst the mess of twigs and berries on her kitchen table wouldn’t be completely unusual for this remarkable iconoclast.

A parent-child relationship doesn’t come naturally to most Aquarian women – they tend to love the idea of having children, but when the reality proves less than ideal, they often become frustrated that their kids won’t conform to a utopian vision where everyone manages themselves and babies don’t need diapers. Day-to-day drudgery wears this lightning rod out, and she much prefers to leapfrog from chore to chore, doing a little of everything here and there. That being said, she loves to share her childlike sense of wonder with little ones, and takes deep pleasure in teaching them and encouraging their own rebellious streaks.

An Aquarian must be involved in work that she feels has significance, or somehow affects the greater good of all humans. She is drawn to doing something that she feels is important, like teaching, working in scientific fields, healing others, or working for charities. Many an Aquarius has contemplated joining the Peace Corps, volunteering for Doctors Without Borders, or eventually ended up working for the United Nations. Sometimes these aspirations can seem like pie-in-the-sky endeavors, as she may talk about doing them more than actually making them happen.

Aquarius women’s frequent difficulty with adhering to predictable routines means that you may see your Water Bearer flailing for a number of years before finally finding her true vocation. She does infinitely better doing her own thing and inventing a business out of thin air  – usually something completely unique like becoming an herbalist, a circus worker, raising alpacas, or starting an organic goji berry farm.

When an Aquarian can set her own hours and be free to travel whenever she wants, her soul truly thrives. Freedom is essential to these sylphs of the air, and they are likely to chafe at having a boss forever breathing down their necks.

Money can be touch-and-go for Aquarius, but she’s usually got some clever scheme in her back pocket, and is rarely broke or scrambling for too long. Most Aquarius women have been working odd jobs here and there from a very young age – the better to assert their independence and not have to beg for cash from their parents.

Many travel alone from a shockingly early age, and often leave home to strike out on their own well before the age of 18.

Aquarians will love any gift you give them, as long as they’ve never seen it before. An envelope with a plastic gift card to a chain store found in any major city will make them feel like you really don’t care about them at all. Find your Aquarian woman something as unique and unusual as she is. Aquarians adore rare crystals and stones, and all kinds of odd treasures from the natural world.

Many Aquarian women enjoy wearing bold, bright colors and accessorizing with unusual elements, like bright green shoes or a huge orange purse. Anything outlandish or unexpected will suit their tastes for the strange and bizarre – and they love wearing anything that they can turn into a conversation piece. The more questions an item of distinctive clothing or jewelry will elicit, the better.

Aquarius women love surprises, but it’s best to check in with them ahead of time to make sure their tastes haven’t suddenly shifted, as they are wont to do. A fixed air sign can make for an oddly stubborn yet mercurial sensibility. This can be confusing when it comes to her dietary habits, taste in lovers, and travel preferences – so when in doubt, ask her a lot of questions!

Aquarians love talking about what they love, and they won’t be coy if you show an interest in learning what they like.