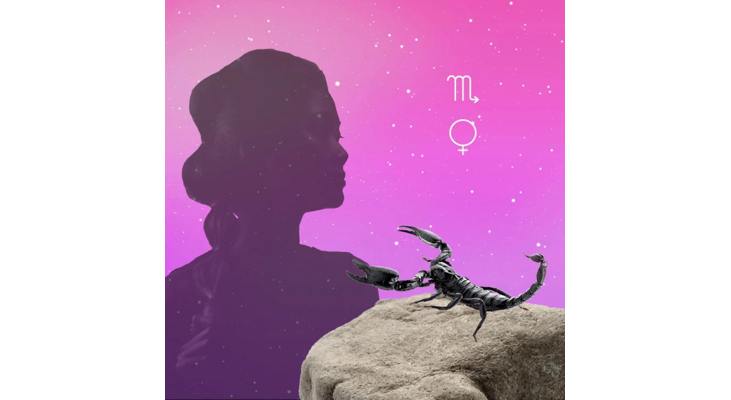 The Scorpio woman is by far one of the witchiest signs of the zodiac.
Scorpio is the eighth sign of the zodiac, and the Eighth House is all about sex, death, and the cycle of regeneration. With their penchant for all things spooky and magical, female Scorpios are natural Queens of the Underworld, and thus usually not ones to shy away from the more intense or heavy characteristics of life.

This sign gets a bad rap from most astrologers for being “too much,” overly dark, or even downright evil. This stems more from modern western culture’s inherent discomfort with discomfort with discussing the Pluto-ruled subjects of sex and death (typically not your general everyday dinner-table conversation). Reviled as a Scorpion woman can be, not many can deny her magnetic personality and the aura of mystery, magic, and sensuality that she wears around her like a cloak. This is not a woman who tolerates surface-level interactions easily. She prefers to give her attention to those willing to go deep with her. With a Scorpio’s electric gaze powerfully focused on you, it’s easy to feel like a bug pinned under glass, examined by a curious scientist determined to learn everything there is to know.

One of the most sensitive signs in the zodiac, Scorpio women feel their emotions intensely, though they may not always express them overtly. A water-ruled sign, Scorpio is symbolized by the submerged depths, like the pure waters flowing through an underground cave. But you may not see the currents or waves rippling through her facial expressions – much of what a Scorpio woman feels, she won’t always express overtly.

Scorpios rule over the occult sciences, and the true meaning of the word “occult” is “hidden” – hence, the Scorpionic tendency toward secrecy and inscrutability. Only the most determined (and respectful) will be granted permission to explore the secret caverns within the heart of a Scorpio woman.

Scorpio women are universally known as the sex goddesses of the zodiac, renowned for their passion, their strong libidos, and their exceptional prowess as lovers.

Sex is extremely important to these women, and sharing a sexual connection with their deeply-bonded lover is a necessity for them to feel completely fulfilled in life.

That being said, Scorpios don’t really love to sleep around, nor do they take sex casually. So until they find their soul match, a Scorpio can feel a little adrift without a partner to frolic and share intimacy with. Dating and lackadaisical flirting for fun’s sake or just as something to pass the time rarely appeals to focused, intense Scorpion women. Do you have what it takes to grab her attention? Find out about your love compatibility with these witches! They tend to have consuming romances that take up a lot of their time and emotional energy. Sexless unions or relationships of convenience will never work for this libidinous sign, nor will an excess of flash-in-the-pan one-night stands –though every once in a while, a girl’s gotta do what a girl’s gotta do, especially during long dry spells! In general, a Scorpio woman will hold out until she finds just what she’s looking for in a partner. Once she commits, she tends to mate for life.

With Scorpio’s widely known reputation for powerful jealous streaks, her possessive personality may also be a bit misunderstood. This kind of jealousy doesn’t stem from insecurity – in fact, most Scorpio women are extremely confident (particularly about the strength of their charms). But once this woman stakes her claim on you, she has a hard time letting go. She won’t take easily to relinquishing her mate into another’s arms without a battle.

Ever walk past those basement apartments in the city and wonder about who might dwell down there? It very well might be the lair of the Queen of the Underworld, lounging on a chaise and grinning up at the hustling and bustling feet of passersby with amusement. The word “lair” is a truly fitting way to describe this sign’s home. She makes her living space an insular, private domain where only her closest friends and lovers are invited.

Decor-wise, Scorpio babes tend to adore textiles, draperies, and elaborate hanging lamps. Her living room might resemble an exotic bazaar, stuffed with the all the spoils of the souks that she’s visited on her travels. But everything here is arranged tastefully, and nothing is overdone or feels sloppy. Scorpios tend to be fairly tidy and can even tend toward the minimal, which makes their love for gloriously embellished details really pop rather than get lost in the visual shuffle.

A Scorpio mom is a protective creature, strong and quiet, who usually has a powerful psychic link with her beloved children. She’s the envy of other mothers, as her kids can usually be disciplined with nothing more than an intense look from their Scorpio mama.

Scorpio women work hard and are exceedingly goal-focused. They set their sights on long-term objectives, and work steadily and quietly toward making their dreams realities.

They often get pegged as loners in the workplace, and tend to intimidate their co-workers, often without meaning to. Scorpios don’t tend to enjoy being subordinate – they would much rather just be the boss, free to make their own decisions, especially around aesthetics and design.

Scorpio women usually have a very clear idea of how they think things should go, and will only share power or control with other signs whose vision they innately respect. They work well with other signs who are similarly quietly powerful, but generally have no time for bombast or showboating – especially if the person with lots of opinions makes no real effort to back any of their talk up with actual results. Scorpios have a serious reputation for getting inside people’s heads, and due to their love of psychology, can easily manipulate others to get what they want.
This isn’t always used for sinister purposes – in fact, Scorpio women can often excel in sales positions, because they will use their intuitive traits to determine what their customers really want and how to make them feel most at ease. But should you ever stand in the way of something a Scorpio truly wants, prepare to get steadily worn down over time – because these women are completely relentless when it comes to achieving their personal missions.

Once they set an intention, they will do whatever it takes to reach that goal, regardless of the desires of others around them. These women do what they say they’re going to do and have a way of making it all look easy – always carrying themselves through even the most difficult and trying workdays with panache and grace.

When shopping for a Scorpio woman, remember always that though her tastes might be a bit unusual or spooky, she won’t appreciate anything tatty or cheap.

You might choose for her something truly bizarre, like a beautiful skull or vintage taxidermy – though make sure it’s something she would actually display in her home. Framed butterflies or moths make a perfect gift for this sign that rules over the cycles of death and rebirth, transformation, and the metamorphosis of the soul, which butterflies symbolize. All the better if you can find a framed set that includes a scorpion, her symbol. Snakes and serpents are another Scorpio symbol, and also bring to mind death and rebirth with their shedding of skin.

While snakeskin printed items may not appeal, jewelry depicting snakes usually will – especially if extremely realistic, or ethnic/geometric. Exotic items from other countries, particularly textiles or costume elements, will usually delight your Scorpio woman. Think unusual hats, headdresses, caftans, or flowing robes. Perfumes and body oils in spicy, heavy scents, and resinous fragrances will often appeal, as well as hard-to-find herbs and spices for her cooking.

Anything related to the occult, human psychology, diverse cultures, and sexuality will definitely interest her – especially vintage books on these subjects. Exquisite underthings and fancy lingerie will please your Scorpio woman, who may be dressed in relatively simple head-to-toe black (always a safe bet when purchasing outerwear for her), but choose bras, undies, and lacy bodysuits in shades like heliotrope, cerise, electric chartreuse, and vermilion.

When in doubt, go with purple, red, or black – as few Scorpios will ever turn up their noses at these colors.